Denis Villeneuve’s sweeping “Dune” leads the way in the VFX race as a cross between “Lawrence of Arabia” and “Star Wars.” But there is plenty of competition from other superhero, action-adventure, and fantasy films. Marvel is more diverse and ambitious in Phase 4 with “Eternals” and “Shang-Chi and the Legend of the Ten Rings,” while Sony counters with its own darker, edgier Marvel property, “Venom: Let There Be Carnage.” There’s also the return of Neo (Keanu Reeves) in “The Matrix: Resurrections,” and the video game heroics of Ryan Reynolds’ Guy in “Free Guy,” among other contenders.

DNEG created spectacular VFX for the otherworldly “Dune” (overseen by two-time Oscar-winning production VFX supervisor Paul Lambert and Oscar-winning SFX supervisor Gerd Nefzer). Shot in Budapest, Jordan, United Arab Emirates, and Norway, the work is both epic and intimate, from the wind blown sand, to the raging sandstorms (done practically at the director’s request), to the flying insect-like ornithopters (requiring a special in-camera setup and backed by photoreal exteriors) to the iconic CG sandworms, which cause the entire desert to vibrate with the help of custom-built mechanics.

Oscar winner Chloé Zhao (“Nomadland”) brought her visually stunning aesthetic to the ambitious “Eternals,” breaking free from Marvel’s reliance on virtual green screens by shooting on location in the Canary Islands and Oxford and London, England. Zhao also leaned on practical effects as much as possible while utilizing her reliance on long takes. For the exotic world building, spanning 7,000 years, the director was inspired by manga and the MCU legacy. For the epic story involving mythological caretakers of humanity, the VFX centered on beauty, invention, and destruction. The work was shared by Weta Digital, Industrial Light & Magic, Scanline VFX, and Luma, among others. There’s a lot of graphic simulation work, but the standout is the CG Deviants, who are both breathtaking and monstrous.

“Shang-Chi and the Legend of the Ten Rings,” the MCU’s introduction to Chinese wuxia fantasy adventure, offered several unique VFX opportunities: manifesting the power of the titular rings, creating Marvel’s first dragons — the Great Protector and the Dweller in Darkness — and conjuring the adorable Morris, the headless, six-legged, furry friend to Ben Kingsley’s court jester, Trevor. The look of the titular rings associated with the immortal Wenwu/The Mandarin (Tony Leung) evolved from an extravagant display of colorful energy to a more subdued one. Weta, known for its eponymous “Pete’s Dragon” and its Emmy-winning dragon work on “Game of Thrones,” created two very different creatures for “Shang-Chi” with magical powers drawn from Chinese mythology. The Great Protector is a serpent-like, wingless water dragon, while the soul sucking Dweller is a winged, tentacled, eyeless creature.

The Matrix “is stronger, safer, and more dangerous than ever” in Lana Wachowski’s’ “The Matrix: Resurrections.” Neo and Trinity (Carrie-Anne Moss) are back to save humanity while exploring the ties that bind. But the franchise is known for its innovative VFX, and DNEG created more than 700 shots, guided by production VFX supervisor Dan Glass (“The Matrix: Reloaded”). Judging by the trailer, they’ve come up with some nifty tech advancements in updating the iconic and gravity-defying Bullet Time fighting and other balletic acrobatics. Plus, there’s plenty of explosive action, a beautiful array of exotic environments, and some stunning simulations to once again subvert barriers between reality and artifice.

For director Andy Serkis’ “Venom: Let There Be Carnage,” production VFX supervisor Sheena Duggal and DNEG upped the CG transformations for Tom Hardy’s Venom, while introducing Woody Harrelson’s Carnage. In fact, Duggal consulted forums and social media platforms to get an idea of what fans wanted for the look and behavior of the larger and more powerful Carnage. DNEG was involved early on during the concept of Carnage and led the build of the tentacled Carnage creature, which uses its large tongue and tail as additional weapons. Superficially Venom looked unchanged from the first film, but under the hood the character was entirely rebuilt, with an updated muscle system that made use of a three-layer muscle/fat/skin simulation. It also required an entirely new facial rig that allowed for better lip-sync, dialog delivery, and overall performance. 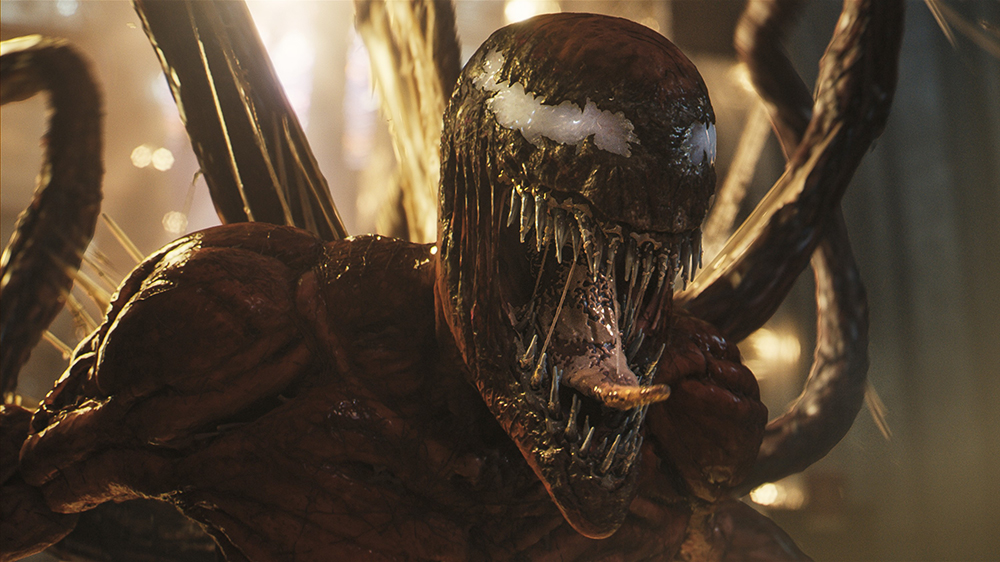 Carnage in “Venom: Let There Be Carnage”

The line between real and digital is deliberately blurred in “Free Guy,” with Digital Domain assisting in the jumping between live-action and CG based on the POV of Ryan Reynolds’ heroic Guy and other characters. To populate the digital version of Free City, DD created CG versions of many of the characters, including Guy. To create the gamesetting, DD used the previs assets, and built nearly 100 3D environments, created from modular buildings, then altered with different textures and materials. Artists then added individual flourishes by hand to replicate and stylize the real-world Boston locations, including storefronts, residential, and commercial buildings. DD also used its proprietary face-swapping tool, Charlatan, for the first time in a feature. This was used for redoing Channing Tatum’s BadAss speech, which required a script revision. Artists created a new facial model of BadAss by hand, then used Charlatan to combine it with the original performance.

Listed in alphabetical order. No film will be considered a frontrunner until we have seen it.

Frontrunners
“Dune”
“Eternals”
“Free Guy”
“Shang-Chi and the Legend of the Ten Rings”
“Venom: Let There Be Carnage”

Longshots
“Army of the Dead”
“Candyman”
“Godzilla vs. Kong”
“The Green Knight”