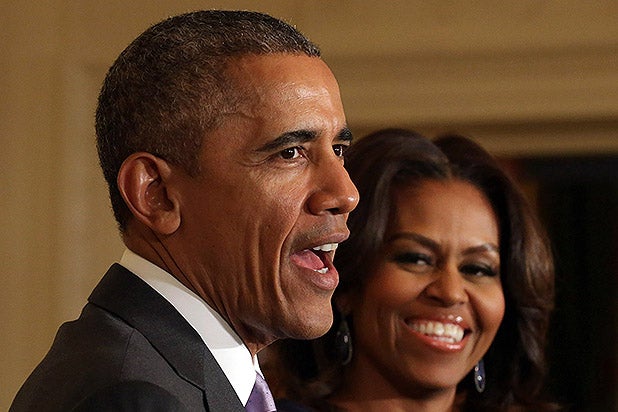 Barack and Michelle Obama’s Higher Ground Productions has unveiled its next round of projects in development at Netflix.

Among the new film and series projects in the works are an adaptation of the Mohsin Hamid novel “Exit West” starring Riz Ahmed, a science fiction film written by Ola Shokunbi, a docuseries about National Parks and a series adaptation of the forthcoming novel “Firekeeper’s Daughter.”

“We created Higher Ground to tell great stories,” the former president and first lady said in a statement. “This group of projects builds upon that goal and the incredible path forged by films like Crip Camp, Becoming, and the Oscar-winning American Factory. From science fiction to the beauty of our natural world to the relationships that define us, Higher Ground continues to strive for fresh perspectives, compelling characters, and a healthy dose of inspiration. We couldn’t be more proud to team up with the brilliant artists behind each of these stories. Each of them has something important to say.”

Higher Ground, led by Priya Swaminathan and Tonia Davis, already has two projects in the works at Netflix — the informational comedy series “The G Word With Adam Conover” and the animated preschool series “Ada Twist, Scientist.”

“It has been thrilling to watch President Barack Obama, Michelle Obama and the Higher Ground team dive into original programming and produce incredible stories,” said Ted Sarandos, Co-CEO and Chief Content Officer, Netflix. “American Factory, Crip Camp and Becoming have captivated audiences all around the world, and their new slate highlights the variety and depth of programming on the horizon as well as new and exciting storytellers.”

See full descriptions of the projects below.

“Exit West” is a feature film based on Mohsin Hamid’s critically-acclaimed novel. A love story set against an epic global migration enabled by a supernatural phenomenon, Exit West is the story of two people as they seek a better life together, all the while yearning for a home to which they may never return. The New York Times named the novel one of the 10 Best Books of 2017, it was selected for the Booker Prize longlist, and former U.S. President Barack Obama named it one of the best books he read in 2017. The film stars Riz Ahmed (“Sound of Metal”) who will also executive produce via his Left Handed Films banner, and will be directed by Yann Demange (“White Boy Rick”) and co-produced with Joe Russo, Anthony Russo and Mike Larocca for the Russos’ AGBO.

“Tenzing” is a feature film based on the true story of Tenzing Norgay, the man who first reached the summit of Everest, the highest mountain in the world, along with Sir Edmund Hillary. This is the story of an unsung hero and the unique bond he formed with another outsider that enabled them to make history together. BAFTA nominee Jennifer Peedom (“Sherpa”), who has spent years on Everest herself, will direct. Tenzing marks her first foray into narrative film. Academy Award nominee and BAFTA winner Luke Davies (“Lion”) wrote the spec script based on the book “Tenzing: Hero of Everest” by Ed Douglas. Peedom and Davies are producing alongside HGP. David Michôd (“The King”) and Norbu Tenzing Norgay will executive produce.

“The Young Wife” is a feature film from writer and director Tayarisha Poe (“Selah and the Spades”). It follows Celestina, 29, on the day of her first wedding. Or not a wedding, exactly, but a party. A party where there’s movement, and Celestina is out of sync. The guests flood in; a storm approaches.

“Firekeeper’s Daughter” is a series based on the debut novel by Angeline Boulley, set to publish in Spring 2021 by Henry Holt & Co. The novel is a YA thriller that follows an 18-year-old Native girl as she reluctantly goes undercover in a police investigation on her Ojibwe reservation. Mickey Fisher (“Reverie,” “Extant”) will serve as showrunner, and will co-write with Wenonah Wilms (“Horsehead Girls”) who will also serve as an executive producer. Like author Boulley, Wilms is from the Ojibwe tribe (Sault Ste. Marie and Red Cliff bands, respectively) and will bring her lived experiences to this series.

“Great National Parks” is a natural history docuseries that will explore some of the most wondrous national parks and wild spaces on Earth. Highlighting extraordinary species and habitats, the series will illustrate the importance of protecting the world’s remaining wildernesses and making them accessible for all. Higher Ground is producing the series with Wild Space Productions and wildlife filmmaker James Honeyborne of the award-winning series Blue Planet II.