The new 2021-22 broadcast season kicked off Monday night with the latest installments of The Voice and NCIS leading the pack in the early ratings results.

In Monday’s primetime roster that featured three new series, CBS’ NCIS: Hawai’i, Fox’s The Big Leap and NBC’s Ordinary Joe, it was the returning titles that scored. Per fast affiliate numbers, The Voice won the night with a 1.0 rating in the 18-49 demo and 6.98 million viewers. In addition to new talent, the season premiere introduced pop star Ariana Grande as a new coach.

Of course, whatever was happening on the Big 4 last night  was in the shadow of Monday Night Football on ESPN. Week 2 of the new NFL season saw the nationally followed Green Bay Packers crush the Detroit Lions 35-17 in what will undoubtedly be the most watched and highest rated show of the night.

The ABC celebrity dance competition return made for impressive performances by contestants like NBA pro Iman Shumpert, and milestone moments by Jojo Siwa and partner Jenna Johnson – who marked the series’ first ever same-sex pairing. Coming in second in demo rating, the latest DWTS debut was up down from its Season 29 (1.3, 8.10M) and Season 28 (1.0, 8.00M) premieres.

Preliminary ratings for ABC and Fox are likely inflated due to local football preemptions, so downward adjustments for both networks are likely.

CBS welcomed back veteran NCIS for its 19th season on its new night. As it had done on Tuesdays for years, the Mark Harmon drama won the evening’s viewership with 8.15 million viewers and scoring a 0.7 demo rating. It helped launch the newest spinoff, NCIS: Hawai’i (0.5, 6.33M), which had the most respectable Live+Same Day showing among the newbies in terms of lead-in retention and overall viewership.

In Monday’s marquee procedural showdown, the 9-1-1 Season 5 premiere on Fox (0.8, 5.26M) is currently edging NCIS pending possible downward adjustment for 9-1-1, which led to the premiere of The Big Leap.

Hoping to provide some debut bounce, NBC followed The Voice with the premiere of the James Wolk-starring Ordinary Joe (0.5, 3.81M). The new NBC drama matched NCIS: Hawai’i in demo rating, but fell short of the CBS spinoff when it came to viewers.

For both Ordinary Joe and The Big Leap, delayed and streaming viewership bumps will be key to survival.

Bob Hearts Abishola returned to CBS for its Season 3 premiere (0.5, 5.24M), which slipped from the sophomore season’s debut in November 2020. Also returning to CBS was The Neighborhood (0.6, 5.12M), which fell three tenths in demo rating and 14% from the previous season opener.

We will update with more ratings as time zone adjusted data from Nielsen comes in. Until then, check out our chart below for the first night of the 2021-2022 TV season. 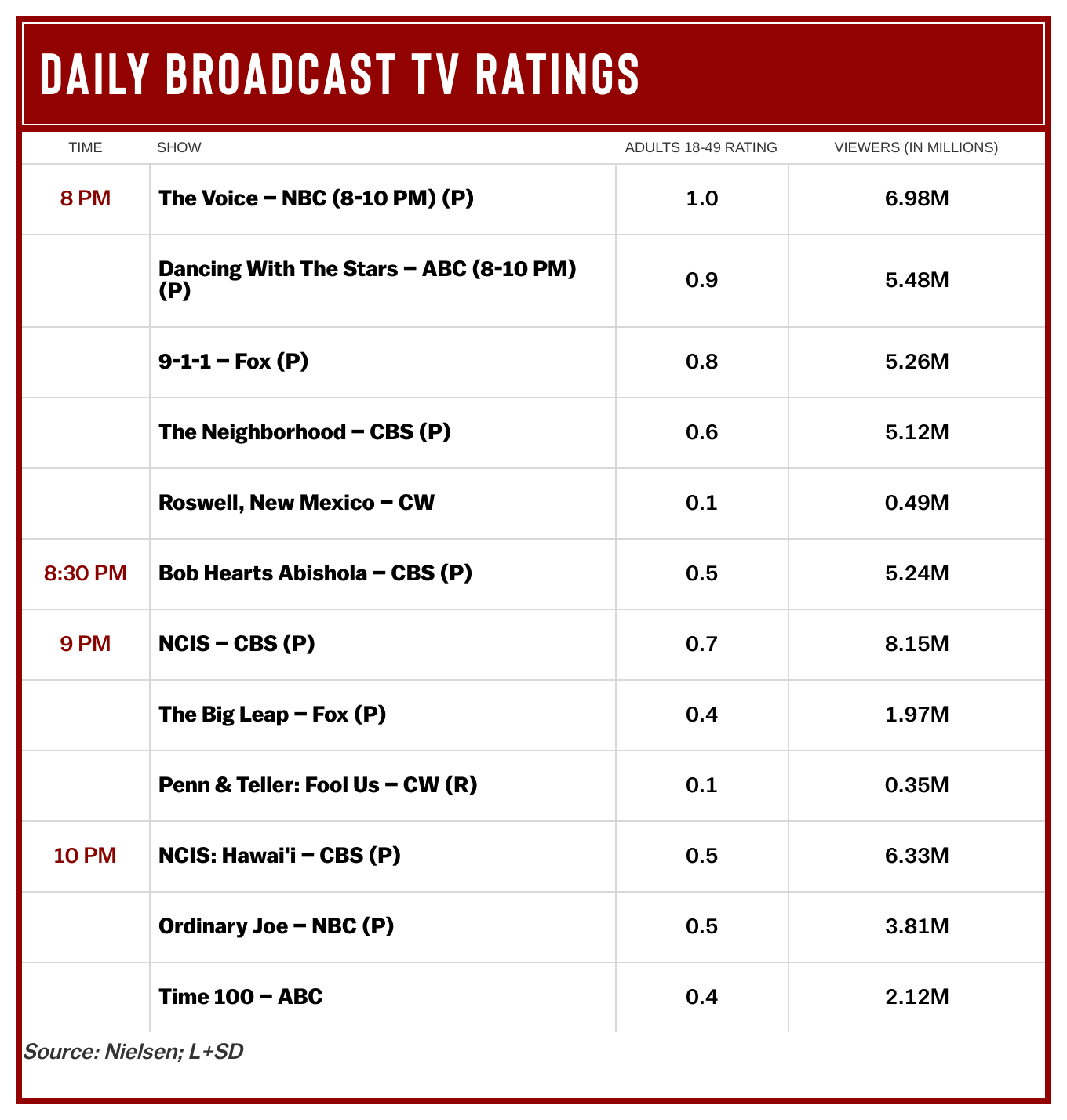