A recluse who coasted on the legacy of his slim output for decades, J.D. Salinger holds more allure as a mystery than as of the man himself. As a result, his legacy has birthed its own genre of speculation, epitomized by Joanna Rakoff’s acclaimed 2014 memoir “My Salinger Year.” Rakoff’s post-grad experiences as a wide-eyed twentysomething assistant to Salinger’s literary agent brought her close enough to the fabled novelist to answer his fan mail and exchange pleasantries with him on the phone, all while coming of age against the backdrop of the mid-‘90s New York youth culture.

Quebecois director Philippe Falardeau’s faithful adaptation of that story works overtime to inhabit the earnest nature of Rakoff’s ambition, with a warm Margaret Qualley performance imbuing the sincere narrative with some measure of soul. But “My Salinger Year” often trips on the self-serious nature of its premise, and struggles with an antiquated quality out of sync with its timeline, as if trapped between the character’s genuine experiences and her idealized vision of a literary world that doesn’t really exist.

Joanna lands in New York from Berkeley, abandoning her accomplished musician boyfriend Karl (Hamza Haq) to pursue her writerly ambitions in the big city. That old chestnut takes familiar shape once she gets an office job that just so happens to put her in the company of America’s most elusive literary icon. One kink: she’s never read a single word of his work, a detail that sneaks into the story as an intriguing surprise. Joanna is attracted to the idea of literary greatness but has much to learn about what lies beneath the surface.

“My Salinger Year” hums along when focusing on Joanna struggles with her icy boss Margaret (Sigourney Weaver) — who was actually Harold Ober agent Phyllis Westberg — and conveying the challenges of juggling the busywork of the literary gig in terms that invite easy comparison to “The Devil Wears Prada.” Weaver, however, turns it in a muted performance that’s never entirely convincing, while her tragic backstory and tough-love approach to her young disciple feel shoehorned in.

However, Margaret’s strict rules for Joanna’s routine lead to the most effective passages of the movie: Tasked with reading fan mail to Salinger before shredding the letters one by one, she decides to start answering them instead; Falardeau (who also wrote the screenplay) explores the range of Salinger superfans with a montage of first-person testimonials about the impact of his work, ranging from a Vietnam veteran to a housewife. Joanna is especially taken with one Holden Caulfield-esque obsessive (Théodore Pellerin, a rising star last glimpsed in “Never, Rarely, Sometimes, Always”), who finds a kindred spirit in the very nature of Salinger’s disinterest in the outside world. 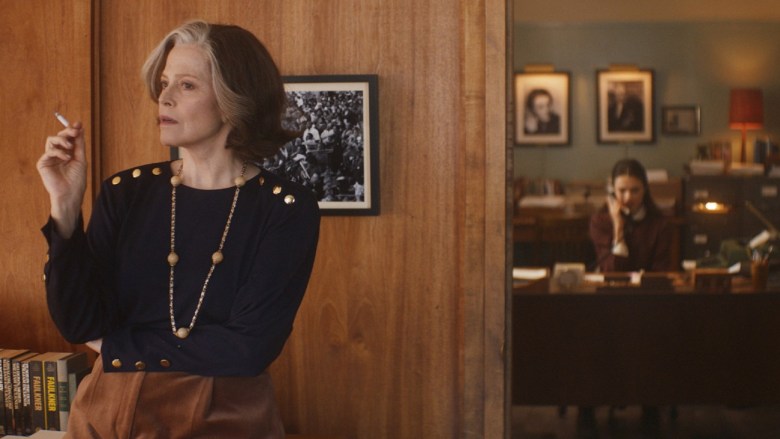 Joanna’s decision to break the rules of her job and engage with Salinger fans holds so much appeal that it exposes the less enticing melodrama surrounding it, particularly the drab relationship saga between Joanna and her new boyfriend Don (Douglas Booth). An aspiring novelist who works at a socialist bookstore and basically denigrates everything about Joanna’s existence (“publishing is so commercial!”), Don’s a watered-down stereotype straight out of the “Girls” Expanded Universe who epitomizes the movie’s fundamental inability to reconcile caricature from realism, as it ends up trapped in the same uncertain headspace as its idealistic protagonist.

“I didn’t want to be ordinary,” she says in an interview that provides the movie with its overarching voiceover. “I wanted to be extraordinary.” That line is delivered without a trace of irony, not unlike a dance sequence that comes out of nowhere in the third act, and there’s no doubting both moments would make the fabled “Jerry” himself renounce these storytelling ambitions outright.

Nevertheless, “My Salinger Year” generates a welcome dose of suspense in its later passages, as Joanna rises in stature at the firm and ends up playing a role in negotiating the terms to a Salinger short story that he shelved years ago. But Salinger himself remains a deity throughout the movie, less for Joanna than for us, suggesting that even she won’t reveal the true nature of the man behind the curtain. But what good is an exposé that only goes for half measures? Salinger surfaces throughout the movie in obscured frames, teasing the possibility of a real human whom even this fictionalized drama can’t reveal. It’s a witty device, but one at odds with the reality of Rakoff’s real experience, and suggests the movie views Joanna’s story less as their own discrete circumstances than another chapter in the unsolvable secret of his career.

“My Salinger Year” premiered as the opening night selection of the 2020 Berlin International Film Festival. It is currently seeking U.S. distribution.