Netflix‘s Money Heist became one of the streaming platform’s major success stories. In 2020, the show’s producer and Netflix announced they were developing a Korean drama remake. With actors like Park Hae-soo from Squid Game in one of the leading roles, the remake caught attention. Money Heist: Korea – Joint Economic Area was teased during Netflix’s Tudum event.

The upcoming K-drama gets its first official teaser introducing its main character, the Professor, and its main cast. The teaser also included the key marker from the original series.

While Park Hae-soo was officially announced to star as Berlin in December, according to Variety, the main cast was already locked in since April 2021.

According to Soompi, actor Yoo Ji-tae will play the infamous role of the Professor. He is joined by notable actors such as Jeon Jong-seo, Lee Won-jong, and Kim Ji-hoon. Money Heist: Korea – Joint Economic Area will follow a simialr storyline as the Spanish original.

The setting will change to be adapted into a K-drama but still include key details like the characters robbing a bank. According to Soompi, executive producer Álex Pina explains, “I am excited to see what will happen when this case unfolds against the backdrop of the Korean peninsula.”

As Money Heist: Korea – Joint Economic Area gets closer to a premiere date, Netflix released its first official teaser introducing fans to the professor, supporting characters, and the cast. 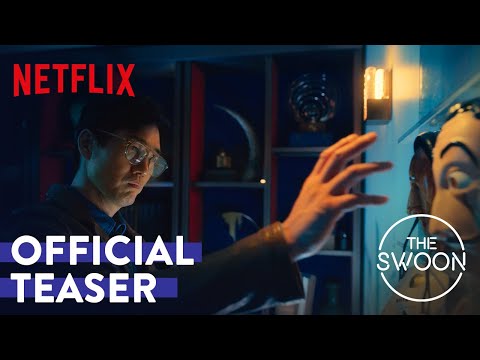 Fans of Money Heist were previously introduced to Yoo as the professor during Netflix’s Tudum event. In a special crossover, the many actors of various Netflix series needed help to find the streaming platform’s iconic opening sound. Álvaro Morte’s the Professor seeks the help of his K-drama counterpart.

The official teaser once again focuses on the K-drama character. In a dimly lit office, the professor looks over something on his desk before turning to approach a wall adorned with traditional Korean masks. With dramatic music playing, fans get their first look at the recognizable Salvador Dali mask worn in the Spanish original.

The scene implies that the Professor is looking over his plans for a heist. After the Professor’s scene, fans get their first look at another key character. In a control room is Seon Woo-jin, played by actor Kim Yoon-jin. Woo-jin is the leader of a special task force and head of the crisis negotiations division.

The Money Heist: Korea – Joint Economic Area teaser ends by introducing the actors as their characters like Tokyo, Berlin, Oslo, Denver, and more from the original series.

When will the ‘Money Heist’ remake K-drama premiere?

The K-drama remake has fans excited to see how Netflix will adapt the original storyline with Korean actors and settings. There are high hopes as Álex Pina also serves as an executive producer for the K-drama. Money Heist: Korea – Joint Economic Area does not have a set premiere date according to NME.

According to the press release, the K-drama will premiere sometime in 2022. Until then, fans can look foward to more teaser trailers and the official trailer.