For the briefest of moments in the summer of 2018, Adventureland was real. If you knew where to look, you would find yourself transported to the bustling river town of Porto Belo in Brazil at the turn of the century, wandering the crowded aisles of an open-air marketplace or ordering a drink at the Hotel de Ferreira. Locals, clothes dusty and skin baked in the sun, and tourists dressed in European finery alike belly up to the bar, hoping to beat the heat.

And should you need to book a riverboat cruise, find Frank, the skipper who operates “Jungle Navigation Company” out of a rambling shack on the water and is always good for a bad pun.

It’s June 1 and day 14 of shooting Disney’s Jungle Cruise in Līhuʻe, Hawaii. Based on the beloved theme park attraction of the same name, the movie stars Dwayne Johnson and Emily Blunt in a rollicking, action-packed, period piece adventure, with the island of Kauai transformed, for the time being, into something straight out of the Disney Parks.

“We had heard that the set was spectacular for months as they were building it,” says Johnson. “But when we finally stepped on set — we stepped on set together — we were just blown away. Very inspired. Had goosebumps.”

Jungle Cruise‘s Porto Belo is Adventureland fully realized — or mostly realized, if you avoid the small number of sets that are exterior only. I’ve not personally been to Brazil in the year 1916, but this feels less like it was adapted from the theme park’s pastiche of Africa, Asia and South America, among other far-flung locales, and more like the real place that inspired Walt Disney to dream up Adventureland in the first place, complete with plants that would have been native to the Amazon Rainforest a century ago.

Erected on a reservoir that provides drinking water for the island, the sprawling set — from the immersive cityscape to the docks — was created from scratch by production designer Jean-Vincent Puzos and his team over many months. It will be torn down after mere weeks, the only evidence that it ever existed living onscreen in Jungle Cruise.

“It’s an incredible set. You combine this kind of set and this kind of story [with] Disney and what they bring to the table, in terms of trust with audiences and families worldwide,” Johnson reiterates. “There’s heart. It’s universal. There’s fun. There’s adventure. And you know, there’s a good lesson as well.” 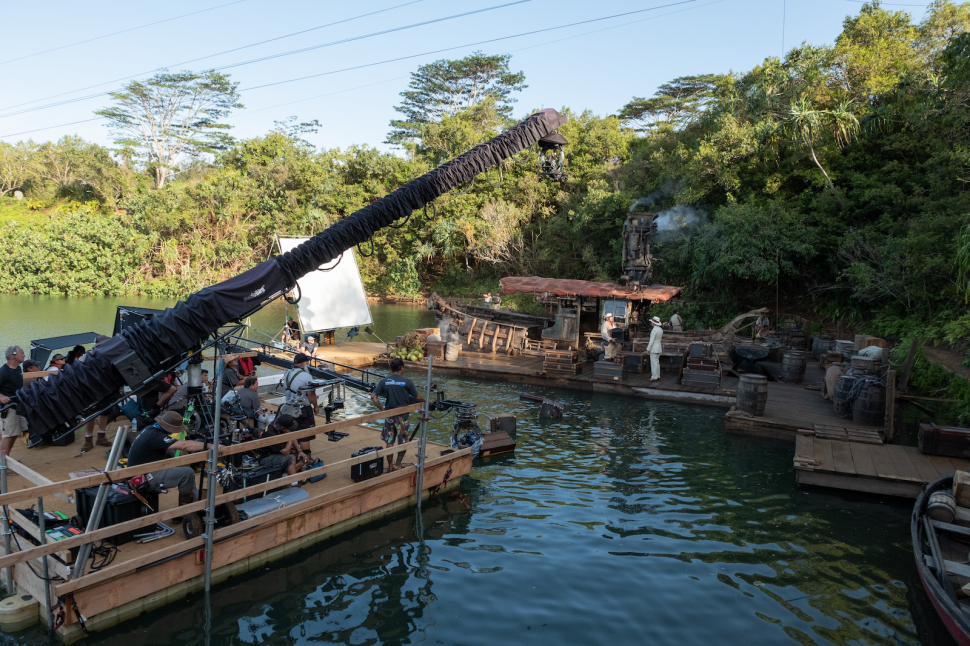 Disney has been working to bring Jungle Cruise to the big screen for decades. The ride was one of Disneyland’s original attractions when it opened in 1955, transporting parkgoers on a punny trip around the globe filled with animatronic animals and groan-worthy one-liners, so it holds a special place in the Mouse House’s legacy. Walt Disney himself, it’s said, served as the cruise’s first skipper.

Though the studio’s track record with ride-to-movie adaptations — your Haunted Mansions, your Tomorrowlands — is inconsistent, everybody involved sees Jungle Cruise‘s potential to become Disney’s next Pirates of the Caribbean.

“When you heard Pirates of the Caribbean was being made into a feature, you really didn’t understand it. And then we saw that trailer and it blew our minds,” producer Beau Flynn tells the group of reports, ET included, visiting set. “Jungle Cruise had that same feel when we read it.”

It happens to also be the favorite ride of one of the biggest movie stars in the world: Dwayne Johnson. When the actor heard word that a Jungle Cruise movie was in development, Disney’s president of production printed out the script and hand-delivered it to him. (Johnson so loves Disney Parks that he’s executive producing a companion series, Behind the Attraction, that explores the unique stories behind various rides.)

In Jungle Cruise, Johnson plays Frank Wolff, the hapless skipper of a rickety riverboat called La Quila. In desperate need of a payday, Frank cons his way into being hired by researcher Dr. Lily Houghton (Blunt) to guide her down the Amazon in search of a mythical tree possessing “Tears of the Moon,” which legend says can cure all sicknesses. Punnery abounds, including some lines taken directly from the ride.

“We’ve had such a fun time writing those. Dwayne has really jumped into that and connected with tons of skippers that have been a part of the Disney ride,” his longtime producing partner, Hiram Garcia, says. (Johnson has a picture of Walt skippering hung in his trailer for inspiration.) “We have a bunch of Easter eggs that we’re going to spread out all throughout.”

“And somehow he pulls it off,” Flynn adds. “Emily’s character doesn’t really enjoy the one-line puns, so he starts to do them on purpose. He’s got thousands of them that he uses to push her buttons.”

“There’s a big, beautiful love story here, and Dwayne and Emily, that is a crazy combustible energy.”

Blunt’s Lily is something of a female Indiana Jones, a woman ahead of her time amid World War I. (She wears pants!) The actress calls her character “tenacious, completely free-spirited, kind of weird” and, most importantly, not “the damsel in distress that you would imagine in this kind of genre or the straight-laced British person, which I was not wanting to do either.”

The distress, instead, is left to Lily’s brother, McGregor (played by comedian Jack Whitehall). Never not in a three-piece suit, McGregor is the definition of a dapper English gentleman, plucked from the lap of luxury and plunged into adventure. A fish out of water, McGregor’s fearful fretting serves as comic relief while Frank and Lily carry the lion’s share of the thrill seeking.

“He’s exactly the kind of person you want him to be,” Whitehall says of working with Johnson. “It would be such a bitter disappointment if you turned up onto set and he was a jackass. When you first sign up to do something like this and you know it’s going to be him, the first thing you have to tell yourself is don’t turn into a fan, just be professional. So, I lasted like six hours until asking him about, like, WrestleMania.”

Together, the trio set off from Porto Belo on what will hopefully feel like the ride of a lifetime for audiences, evocative of films like Indiana Jones and the Pirates of the Caribbean series. Yet Jungle Cruise takes its biggest inspiration, as name-dropped by everyone you converse with on set, from the 1984 classic Romancing the Stone. If everything goes right, Jungle Cruise will feel like one of those movies Hollywood doesn’t make anymore.

“I think you would be very surprised by the tone of the movie, by the scale, the scope, the set pieces,” Flynn teases. “But at the core, there’s a big, beautiful love story here, and Dwayne and Emily, that is a crazy combustible energy.”

“They’re both so formidable and independent people in real life, so they don’t suffer fools. And those two really go at it and they’re just having a blast,” Flynn confirms. “I think you’ll feel that energy. There are a lot of things that you can create in our business — it’s a smoke and mirrors business — but you cannot fake a vibe. And there was a vibe on this movie.” Back on set, Johnson is preparing to shoot a fight sequence in Porto Belo’s tavern. A pile of breakaway furniture — chairs and tables and benches — is on hand right outside the tavern set, wrapped in caution tape, lest they break prematurely. Inside, the director calls “action” and a waitress lets out a bloodcurdling scream as a performer in a motion capture suit jumps out.

That actor will later be replaced by a CGI-ed jaguar.

Lily lunges into action, though its Frank who pants and grunts his way through a fight with the man in the mo-cap suit. The director calls cut and someone hollers, “Bring in the stuffies!” And Johnson performs the same scene once more, though this time opposite a stuffed animal prop. Onscreen, audiences will watch Dwayne Johnson wrestle a photo-realistic jaguar.

“This is a man pretending to be a jaguar in a leotard, which is great because a man dressed in a leotard pretending to be a jaguar at no point just opens his bowels in the middle of a scene,” cracks Whitehall. For his last Disney film, The Nutcracker and the Four Realms, he worked with real horses and, “Every time I had closeup, it would poo everywhere. I’d have to carry on doing my closeup with an unfeasible amount of excrement coming out of its backside. Sorry, I’ve gone quite vulgar there, but that’s a genuine thing. I thought today, ‘It’s so good that this is not a real jaguar.'”

For the most part, the animals in the movie will all be VFX, aside from a few goats and a bird named Rosita, who spends the movie on the shoulder of Paul Giamatti’s foil, Nilo. (For those keeping track of the Easter eggs within this story, Rosita is also the name of a cockatoo in The Enchanted Tiki Room.)

Giamatti will wrap filming in Hawaii, while the production moves to Atlanta. There, they will be joined by two additional cast members: Jesse Plemons as Jungle Cruise‘s primary villain, Prince Joachim, a German heir after the same mythic MacGuffin with less benevolent intentions. And Edgar Ramirez as a 16th century Spanish conquistador with a mysterious connection to Frank.

“We unearth a lot of great legends that have come from the Amazon. Whether it’s true or not, we’ll never know, but we tapped into a lot of those mythologies and stories and curses and things that could potentially happen over the course of a very long Jungle Cruise through the Amazon,” Flynn teases of the final component necessary to the film: Peril. “We want to push the danger.”

Like the odyssey down the river within the movie, Jungle Cruise has had its own long, twisting and turning road to movie theaters. (When it finally arrives on July 30, it will also be available to stream on Disney+ with Premier Access.) Think of it like an extra long queue at Disneyland, one you stick in because you know it will be worth the wait to see the backside of water. And then, sequels? Pirates had four of them — and soon to be more — and the ride itself features adventures in Asia and Africa, too.

“We’ve been designing some paths that it can go to, future worlds that are very organic to the ride,” hints Flynn, though he’s wary of “sequel pandering.” But, “that’s certainly the dream.” As luck would have it, turning dreams into reality is what Disney does best.