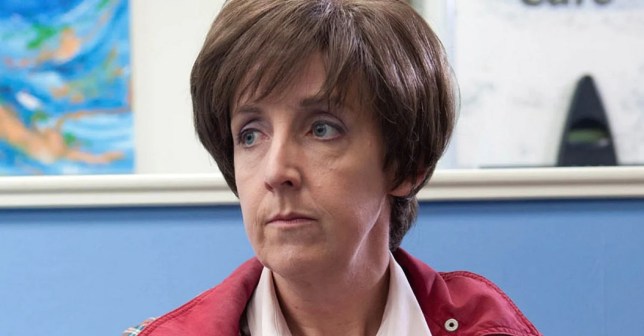 She will forever be known as Hayley from Coronation Street to fans, and Julie Hesmondhalgh has revealed that at one point she thought she would be in the show forever.

To mark the publication of her new book, An Actor’s Alphabet, Julie has been talking to the Mirror about her 16 years as one of the most iconic characters in the soap’s history – and how she never wanted to leave.

‘I used to joke that I’d be there for the 100th anniversary,’ she says. ‘When new cast members would join I’d introduce myself by saying, “I’m Julie, they’ll carry me out of here in a box.”’

Hayley first appeared on the cobbles in 1998 in what was only ever meant to be a short-term storyline. ‘Hayley was meant to be the first in a series of disastrous dates for Roy (David Neilson),’ Julie explains. ‘But people really got behind the relationship. They wanted us to succeed.’ This was all the more remarkable given that Hayley was the first trans character in a UK soap.

‘A lot of people think about the way I came and left Coronation Street, with the fairly sensational soap storylines,’ Julie says, referring to the revelation that Hayley was trans and also the sad storyline of her death as she took her own life while terminally ill with pancreatic cancer. But she says, ‘The 16 years in between there was a lot of pottering around.’

The ‘pottering around’ became so comfortable that Julie says. ‘I’d lost all ambition, any sort of thoughts about doing anything else, I was so happy there. I never intended to leave.’

Wanting to stretch her acting talents a bit she took some time off in 2012 to appear in a play and this proved to be a turning point. ‘Doing that made me realise there was other work I wanted to do, other stories I wanted to tell,’ she says. She made the decision to leave Coronation Street.

‘I thought long and hard about it but took the plunge,’ Julie recalls. ‘I was really devastated when I left, even though it was my decision. I do miss Hayley still. I get such a thrill when she’s still talked about in Coronation Street.’

As well as making her exit storyline completely moving and memorable, Julie’s departure has led to a busy and varied career, including work in shows such as Broadchurch and The Pact.

In the new year she’ll be appearing on stage in New York, and also has a new ITV comedy drama coming up called You & Me.

And Hayley, is, of course, still remembered and talked about on Corrie, with a recent storyline centred around her famous red anorak – which is so iconic it’s now a museum piece.