King Kong’s clash with the King of Kaiju is performing as well as his last film, “Kong: Skull Island,” in 2017. 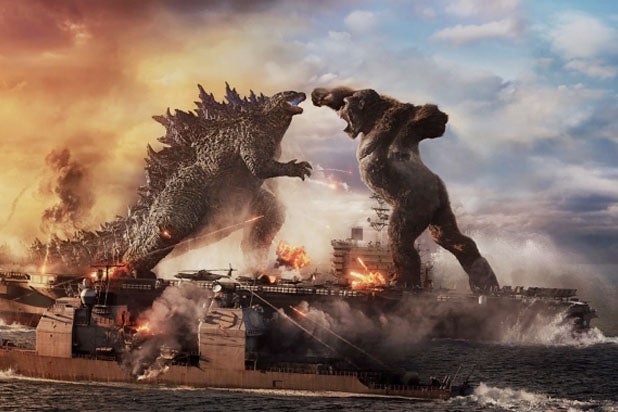 Warner Bros./Legendary’s “Godzilla vs. Kong” is providing some reasons for hope in Hollywood, as the film opened in 38 countries this weekend ahead of its U.S. release next Friday and earned a strong $121.8 million opening, including $70.3 million in China.

In both China and across the dozens of markets getting the film this weekend — which includes Mexico, Australia, South Korea, Russia and India — “Godzilla vs. Kong” is performing 11% ahead of its 2019 predecessor “Godzilla: King of the Monsters” and consistently with the 2017 film “Kong: Skull Island.” In China, “King of the Monsters” earned a $66.7 million opening while “Skull Island” earned a $71.6 million opening.

With this result, “Godzilla vs. Kong” has now earned the largest overseas opening weekend for a Hollywood blockbuster since the COVID-19 pandemic began. The impact of the pandemic is still expected to keep the film’s numbers below those of “King of the Monsters,” which was a box office disappointment with $110 million grossed in the U.S. and $386.6 million worldwide against a $170 million production budget.

But the crossover film is still a welcome title for tens of thousands of theaters around the world that are looking for a larger-than-life blockbuster to bring audiences back to theaters. IMAX is reporting its best weekend for a Hollywood film since the release of “Star Wars: The Rise of Skywalker” in December 2019, with “Godzilla vs. Kong” grossing $12.4 million from 891 IMAX screens globally.

While this is a big step forward, there’s still plenty of pandemic obstacles facing Hollywood’s blockbusters. The virus continues to keep major markets in Europe and South America shut down, with countries like France, Poland and Italy still under lockdown orders because of the spread of more infectious variants while Brazil has seen its daily death rate top 3,500 in the past week. The struggle of these countries to get the virus under control and reopen theaters is believed to be a major reason why Disney chose to move the release of “Black Widow” this past week from May 7 to July 9.