GMA3 has been getting into the rhythm of working with its three new co-hosts ever since T.J. Holmes and Amy Robach’s relationship led to them going on hiatus.

With the absence of Dr. Jennifer Ashton, who has gone on her holiday break, the Good Morning America after-show has experienced a rotating panel of stars.

However, fans are falling into step with the three currently on the panel, those being Rhiannon Ally, DeMarco Morgan, and Dr. Darien Sutton.

In fact, their banter is already one viewers are loving, as Rhiannon quickly called out her co-hosts on the air at the top of the show on Thursday for falling behind on the holidays.

TRENDING NOW: GMA3’s new anchor talks struggle with getting to host the show

“We’re getting close to Christmas, so go ahead and get it out, we know what you’re going to ask us,” DeMarco said exasperatedly to Rhiannon.

“Should I even ask?” she simply posed while throwing her hands up, then getting to the main question: “Have you started your Christmas shopping?”

A post shared by GMA3: What You Need To Know (@abcgma3)

Fans are getting used to seeing three new hosts on GMA3

DeMarco confidently responded with a “nope!” although Dr. Sutton replied: “I started yesterday,” after getting the same question from Rhiannon during the previous show.

“Only because of you,” he continued, even receiving a high five from her, with DeMarco quipping: “Always trying to be the teacher’s pet, trying to show off,” leaving his co-stars in hysterics.

During Dr. Sutton’s first appearance on the air in the previous show, his co-hosts wondered how he’d found the time and drive to even make it to the air in the first place.

DeMarco even asked him: “Good to see you, man! Don’t you ever sleep, you were in LA yesterday?” to which Dr. Sutton replied with a sheepish grin. 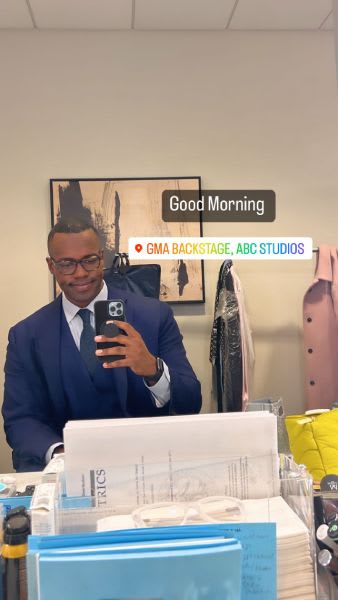 Dr. Sutton stepped in as the sub for Jennifer Ashton

“You know, I try to get at least seven hours of sleep, as per my recommendation. Sometimes I don’t meet that,” he responded, even joking: “Do as I say, not as I do.”