Over the past couple of months, Emmerdale viewers have seen Kim Tate (played by Claire King) display worrying behaviour. It comes after someone close to her has been drugging her and at first, she thought it was dementia or another illness. In upcoming scenes, the Home Farm owner will set a trap and expose the culprit and their sinister behaviour. Official soap spoilers have released an image that shows Kim sitting down to dinner with six other villagers – who wants her business and who is prepared to kill her for it?

Next week, ITV fans will see Kim dressed to impress, ready for her formal luncheon at Home Farm and she has invited all her oblivious suspects.

In the village, Jai Sharma (Chris Bisson), Jamie Tate (Alexander Lincoln) and Dawn Taylor (Olivia Bromley) are uneasy about why they’ve had a formal invitation from Kim.

Back in the manor house, Kim’s keeping up the pretence of being drugged and confused as she responds to Will Taylor’s (Dean Andrews) questions as to why he’s received an invite to the lunch.

As the guests arrive one by one, Kim pretends to be befuddled as she starts to spin her web.

Once the guests are all seated, Kim takes charge and declares she’s stepping back from the business, but first needs to anoint her successor.

Shock ripples through the dinner party and Kim sits, revelling in the reaction it creates and bickering amongst her guests commences. 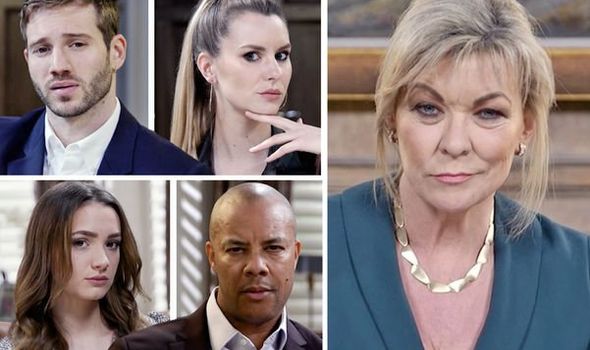 Viewers will see Kim address her guests one more time with a speech designed to manipulate her poisoner into taking action… but will it work?

Meanwhile, Al Chapman (Michael Wildman) is determined to impress Kim as he thinks he has what it takes to be in charge of the business.

On the other side of the table, Jamie is unnerved by his mother and Will’s closeness and when the opportunity arises, he takes Noah Dingle (Jack Downham) to one side and gives him on another covert mission; to spy on Will.

As for why Kim is doing this, Claire explained: “Kim is throwing out a line and then seeing who will be reeled in by her shock announcement. Who wants to succeed her the most?  Who will she flush out and expose as her poisoner? Once again Kim holds all the cards – it’s now a waiting game.”

Emmerdale’s Story Producer Sophie Roper explained: “Kim’s explosive discovery will send her on a quest for vengeance that will rock the Tate Empire like never before. With a traitor in her midst, Kim’s a very dangerous enemy and as the plot to unmask her poisoner thickens, Home Farm will become a hotbed for secrets and lies.

“But as Kim discovers who has committed the ultimate betrayal, will Kim be able to stop them before they stop her…”

As for the identity of the person drugging Kim and being fooled into becoming her successor, these are the suspects. 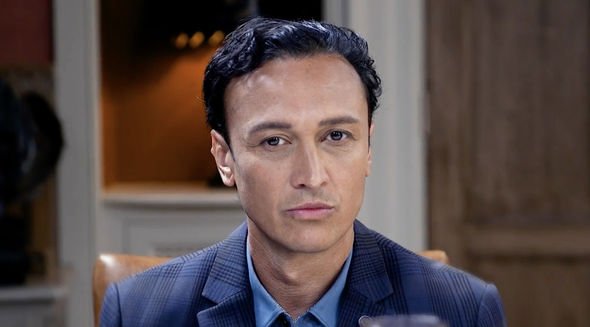 Jai and Kim have only ever had a business relationship and it didn’t get off to a good start – after all, Jai’s father, Rishi Sharma (Bhasker Patel), was the one who sold half their sweet business to Kim following the fire.

Speaking about his character being invited to dinner, Chris said: “Nobody knows why they have been invited to the lunch. The invites landed through their letterboxes that morning for lunch that same day, which is odd.  There is a conversation in the village where Dawn, Jamie and Jai are all talking, they are all slightly unsure what to expect.

“Andrea comments to them how Kim is probably going to murder them all but then she jokes it’s probably worse than that.”

As for how Jai feels about Kim at the moment, the actor continued: “Kim’s not been pulling her weight at the business – so, Jai has essentially been left running it. Kim’s also making a lot of mistakes, missing details on contracts etc.

“So for Jai her situation is increasing his workload and really starting to frustrate and annoy him.

“His motive would be to undermine, convince everyone she’s not capable and then try and take full control of the business. A bit of payback for the way she treated Rishi when he was forced to sell his share of Sharma & Sharma to her.”

As for whether Jai will become Kim’s successor, Chris explained: “He already owns half of the business. I don’t think he believes she is just going to hand the other half on a plate. I think he is more concerned that Al will get a bigger share than he’s got… Or even Kim’s share.”

So could Jai be the poisoner? “Yes, he could – but I doubt he’d be doing it to kill her.”

In recent months, Jamie has distanced himself from Kim, especially after her behaviour towards Dawn, but despite this, he is worried about her.

“Jamie has not been getting on with his mother for a while – she isn’t pleased with his choice of partner,” Alexander said.

“However, with Kim being a bit fuzzy and forgetful I think Jamie is slightly concerned about that. He thinks people are starting to take advantage of her.”

And when he arrives for the dinner party, he is “totally shocked” to see the others.

“Due to all the confusion she is experiencing Jamie is not sure if Kim knows what she is doing. He is really worried she could just do something really rash. I think she has been acting out of character for a while,” the actor commented.

“Before the confusion there is no way that Kim would have considered just giving up and handing over the business. Previously she would never have talked of retiring but this is what she is essentially saying. It’s very out of character.”

It seems unlikely Jamie is the one to be poisoning his mother, but Alexander said his character “has the access” to do so. 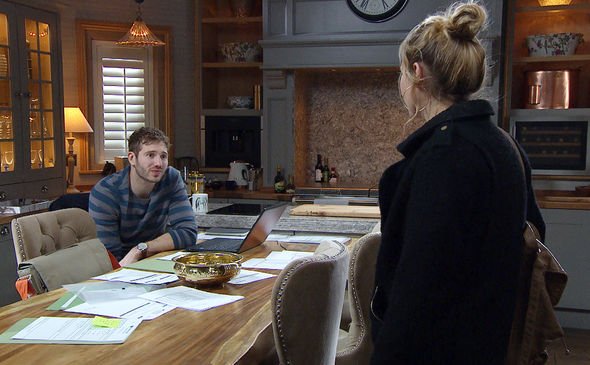 Dawn and Kim have not seen eye to eye since the mother of one registered her interest in Kim’s son.

Kim strongly believes Jamie can do better than the former prostitute and has, on several occasions meddled in Jamie and Dawn’s relationship.

As a result, Dawn could easily be the one intent on revenge.

When asked how her character feels to be invited to Kim’s formal lunch, the actress who plays Dawn said: “Dawn is very confused… she doesn’t trust Kim at all, she knows Kim is dangerous after the spiked drink incident and she knows Kim does not approve of her relationship with Jamie at all.

“But Dawn is falling in love with Jamie and is intrigued about what the invite means.”

Dawn is “very surprised” when Kim announces she is stepping back and, “thinks it’s out of the blue”.

“The vulnerability in Kim really shocks her,” Olivia added. “Kim is powerful and dangerous in Dawn’s eyes…she doesn’t want Jamie to be dragged into his mother’s world any further. She can’t imagine Kim stepping back quietly.”

Despite this, “Dawn doesn’t for a second think she has a look in” with becoming Kim’s successor.

Does this mean Dawn is not the one who has been drugging Kim? 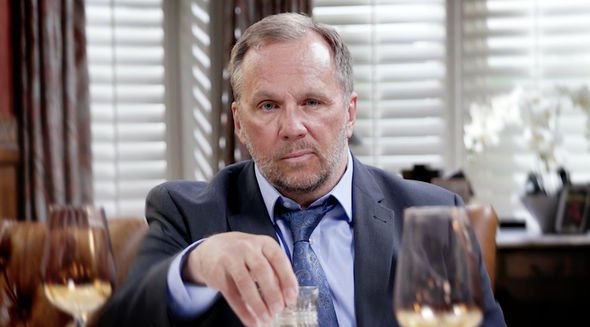 Will’s loyalties are split between Kim and Dawn, but does this mean he would poison his on-off lover in order to protect his daughter?

As for how Will and Kim have been getting on, Dean said “pretty well” and he is “starting to soften a little bit”.

But the actor doesn’t think he will be the one to take over her role as Home Farm matriarch: “I just think he feels there as a support to her. He knows he’s got good ideas but I don’t think he thinks he’s about to run the place.”

But that doesn’t mean he isn’t the one drugging her.

“Yes he could [be the poisoner], to get her back for his daughter,” Dean revealed.

“He keeps getting reminders from Dawn that he’s not done anything about that fight. And as a father of a daughter, I don’t think he would want to let her down.

“He’s also up at Home Farm – he’s got access. He can walk in when he feels like it, he can make excuses that he’s there for different reasons. He’s got the accessibility to poison Kim for sure.”

Al is lucky to still be in the village after he was exposed as a two-timing cheat at Christmas and framed for stealing thousands of pounds from Home Farm.

But Kim has kept him around, even though he doesn’t work for HOP anymore.

When asked whether Al is surprised to be invited to Kim’s lunch, Michael replied: “No I don’t think he is.  He is a business associate and has a good working relationship with Kim. They go way back.

“Although Kim’s been a bit short with him recently. I think some of the trust may have broken down.”

Whether the businessman is capable of running the whole enterprise, the actor added: “Yes I believe he thinks so.

“Whether she would just sign it over to him is another matter.. Although she might do that just to make Jai irate!”

However, he is suspicious as to why Kim is making such an announcement.

“Al is very bemused, the Kim Tate of old would not just walk away from a business. He is wondering ‘What is happening?’”

As for Gabby, she moved into Home Farm after announcing she was expecting Jamie’s baby and at first, she was kind towards Kim as well as wary of her power.

But it seems to spend time with the matriarch has had a detrimental effect as Gabby behaves as deviously as Kim does.

Kim said she would show Gabby the ropes in the hope her new grandchild could take on the family business, but those watching at home have seen the mother-to-be turn on Kim and toy with her forgetfulness and recent bad health.

“When Kim comes out with this thing of someone taking her place – it is Gabby’s future with the baby and she would fight for that and she doesn’t want Jamie to get it,” Rosie remarked. “The last person she would want in charge is Jamie, as he could get rid of her.”

Does Gabby think she is going to be put in charge of Home Farm?

“She does – I think Gabby is quite hopeful she will have a future there. She’s been doing lots of things to impress Kim. She’s working at the HOP doing what she can. Being her assistant, picking up her car etc.”

But Emmerdale fans are extremely suspicious of Gabby and believe she is the one poisoning Kim.

“Gabby has a lot of tricks up her sleeve; she is ambitious and she will do whatever she can to get power. And Kim is that person who can help Gabby do that.

“But as to whether she would poison her I’m not sure…You will have to wait and see,” the actress teased.

The person poisoning Kim hasn’t killed her yet and Rosie speculated: “We don’t know if the poisoner is trying to kill her or just subdue her?”