Moira Barton’s (played by Natalie J. Robb) brother finally arrived in Emmerdale tonight and within seconds of him coming face to face with his estranged sister, he was causing trouble. But, those watching at home slammed the ITV soap for the “unrealistic” storyline which saw bad-boy character, Cain Dingle (Jeff Hordley), somehow bundled into the back of Mackenzie’s car.

Taking to Twitter to comment, one said: “A stick insect like him tackled Cain good enough to stuff him in that car boot? Yeah, right! #Emmerdale.”

“#Emmerdale oh so he’s already lifted Cain then. They’ve spent yrs building Cain up as a big hard nut but some weedy t***** just sticks him in a car boot,” another chimed.

One tweet read: “If ‘Mackenzie’ was a foot taller & three stone heavier in muscle, then I’d buy Cain’s situation. He looked comfy in that boot though didn’t he? #Emmerdale.”

“Who the bloody hell is writing these storylines? How would Mackenzie know who Cain is. Come on Emmerdale, give us something believable if you are going to try and shove this site down our throats. #emmerdale #Emmerdale,” someone else mentioned. 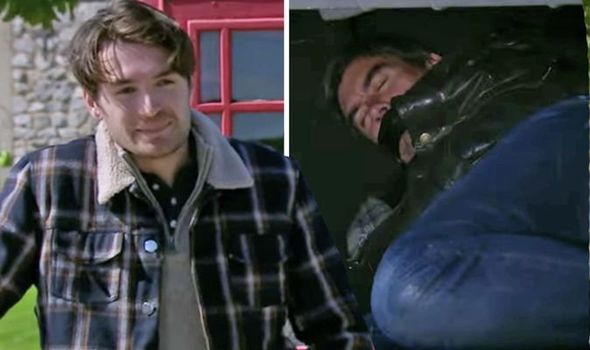 While one fan added: “Cain would of bitten his head off, chewed it a couple of times – then spat it out ‘tut’ #Emmerdale.”