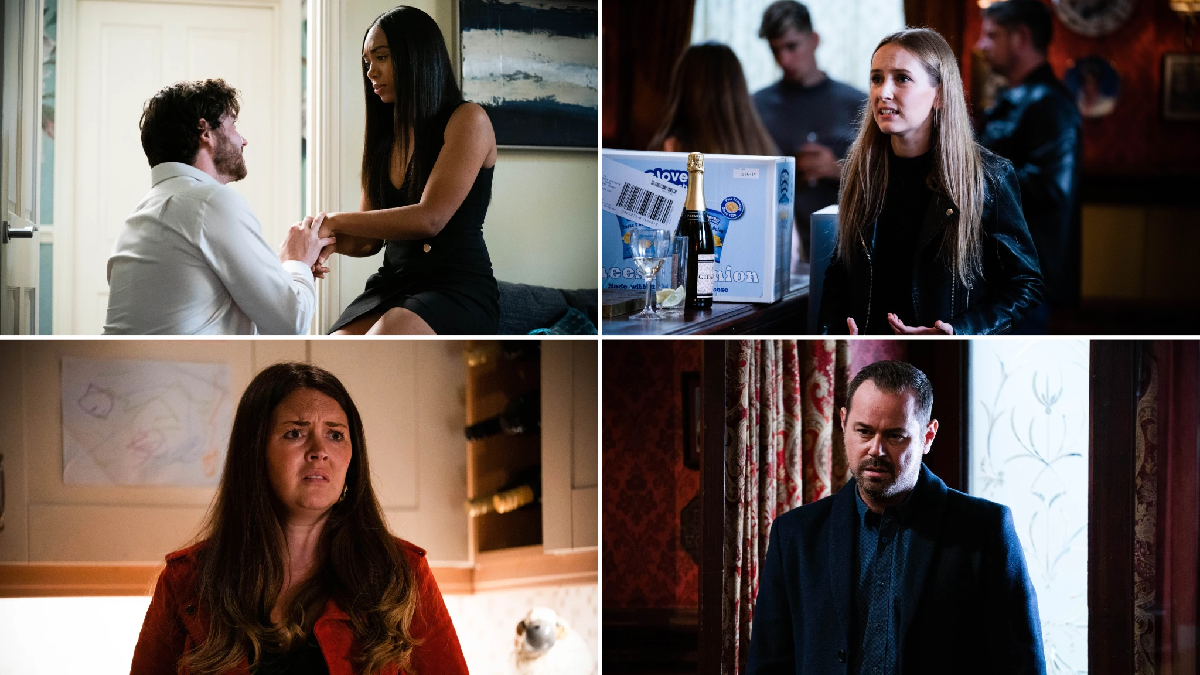 Chelsea Fox (Zaraah Abrahams) is set to get the surprise of her life when Gray Atkins (Toby Alexander-Smith) proposes in EastEnders – but not as surprised as Whitney Dean (Shona McGarty) will be.

Stacey wants Jean to let Eve stay. She then comes up with an idea to solve another problem and teams up with Eve to approach Suki. Suki is annoyed when she learns that she may not be able to evict the Slaters.

Later, Stacey and Eve report back to Jean about what they’ve been up to. However, once Jean is alone with Eve, she orders her to leave. Stacey is disappointed when she realises that Eve has gone.

Whitney has been avoiding Gray. Gray begs for her forgiveness and asks her to attend his dad’s funeral, but Whitney refuses. Chelsea tries talking to Gray, but he brushes her off.

Bailey tries to highlight climate change by standing outside Walford East with a petition for meat-free Mondays.

Vi confides in Rainie about how her son Jonno has sold all of her belongings, but she asks Rainie not to tell Stuart.

Karen isn’t happy over Chelsea and Gray’s renewed connection, so she accuses Chelsea of gold-digging.

Whitney starts to feel guilty over not attending the funeral of Gray’s father. She decides to go after all, but Chelsea intervenes and offers to attend in her place.

Later, after the service, Chelsea comforts Gray as he cries. Overcome with emotion and also tipsy after drinking, Gray asks Chelsea to marry him.

Stuart finds out what happened to Vi when he spots Billy flogging all of her items from a house clearance. Stuart is furious over what Jonno has done, but Vi urges him to leave the situation alone.

Although Stuart has got Vi her belongings back, Vi worries that one item is still missing – an antique children’s book. She tries to get it back, but Billy has already sold it to Kim.

Nancy and Frankie continue to argue. Things come to a head when Frankie throws a drink at Nancy, causing them to chase each other around the pub. Mick arrives back and is unimpressed by the chaotic scene that greets him.

Mick confronts Nancy and Frankie for causing a scene at the pub. He then becomes confused over the presence of Janine.

Later, when Frankie apologises to Mick and they share a father-daughter moment together, Nancy gets jealous.

Kim refuses to return the antique children’s book to Vi. Patrick then finds an interesting photo in the book.

Kim reads an online article about Cindy Cunningham from Hollyoaks and her upcycling of clothing.

Rocky encourages Peter to invest in his meat-free meat business and gets him to sign over £3,000. Dotty warns that she’ll need more money to help her mother, just as Sonia walks in. Did Sonia overhear anything?

Ben sees an old fling when he’s at the café, which unsettles Callum.

Honey and Janet return from America. Suki offers Honey her job back, but Honey politely declines.

Martin confides in Sonia about his suspicions.

Nancy’s jealousy gets worse when Mick buys Frankie a second-hand car. When the vehicle breaks down, it seems that sibling rivalry could be to blame.

Later, things come to a head between Nancy and Frankie.