Holly Willoughby and Phillip Schofield have been met by a number of complaints over the past few days after they were pictured visiting the Queen lying in state after avoiding the lengthy queues to do so. The This Morning duo attended the historic event in a “professional capacity” according to the ITV show but it sparked debate amongst some that they had “queue-jumped”, especially as some members of the public had been waiting over 14 hours to pay their respects.

Their visit was also brought up on Breakfast with Eamonn and Isabel on Monday morning as the GB News hosts discussed the latest news surrounding the Queen’s funeral.

Alongside guests Dawn Neesom and Christopher Biggins, Eamonn Holmes and Isabel Webster discussed the historic day ahead as millions prepare to say farewell to Her Late Majesty.

But after GB News guest Dawn said “everybody had come together” in a unified effort to pay their respects, Eamonn brought up his former This Morning colleagues’ trip to visit the Queen lying in state.

“Except not everyone came together, Biggins,” Eamonn chimed in, taking a swipe at Phillip and Holly. 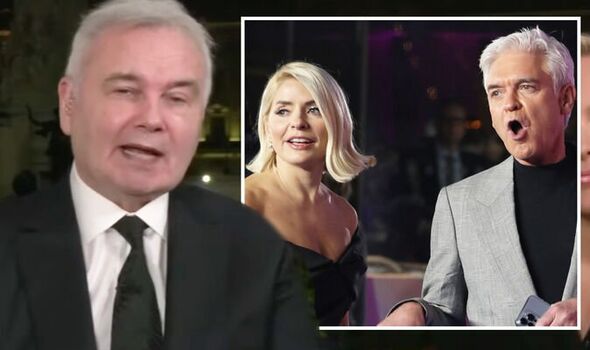 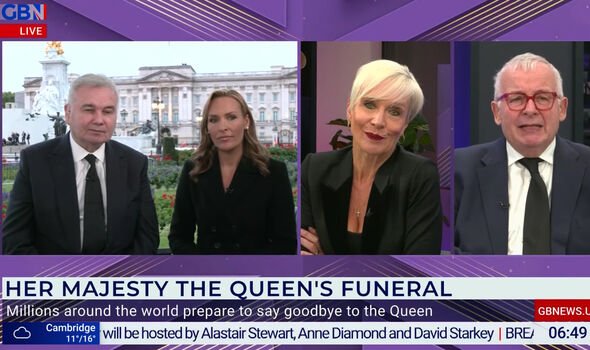 He added: “There’s been a lot of outrage at the ITV This Morning presenters, Phillip Schofield and Holly Willoughby, who went their separate ways, what do you think of the reaction to them?”

“Well I think it was a very silly move by them and their PR people, you know, to make this happen,” Christopher weighed in.

“Queue jump,” Dawn cut in as Christopher continued: “That’s it, I knew there was a word, queue jumping, you can’t have it! 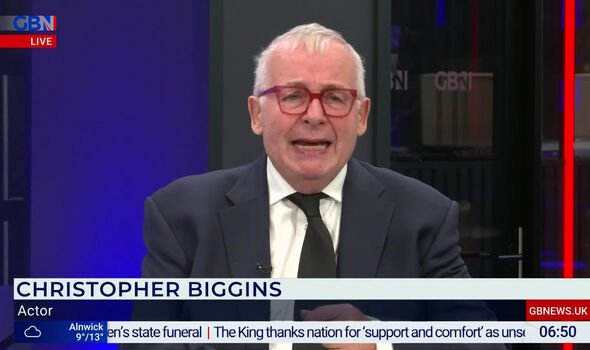 “I was in Plymouth all last week doing a show for the 40th birthday of the theatre and I desperately wanted to go so we came up yesterday from Plymouth on the train to the queue and they closed the queue.

“So I wasn’t fortunate but that’s what life is. You can’t – I mean David Beckham!

“David Beckham was wonderful, what a man, he queued and I know lots of other famous people who queued – my friends Anthony and Georgina Andrews queued and he’s not well.

“You do these things for your country and for the Queen. They were out of order, I think, very much so!”

This Morning released a statement, however, defending Phillip and Holly’s visit to the Queen lying in state.

It read: “Hello everyone, we would like to clarify something. We asked Phillip and Holly to be part of a film for this Tuesday’s programme.

“They did not jump the queue, have VIP access or file past the Queen lying in state – but instead were there in a professional capacity as part of the world’s media to report on the event.

An ITV spokesperson also released a statement which read: “This Morning had press accreditation and like other media, Phillip and Holly were escorted to work from the press gallery by government staff.

“They did not file past The Queen’s coffin. They were there alongside a host of other broadcasters and national press outlets for an item that will be broadcast on Tuesday’s show.

“Any allegations of improper behaviour are categorically untrue.”

Breakfast with Eamonn and Isabel airs Monday to Thursday at 6am on GB News.