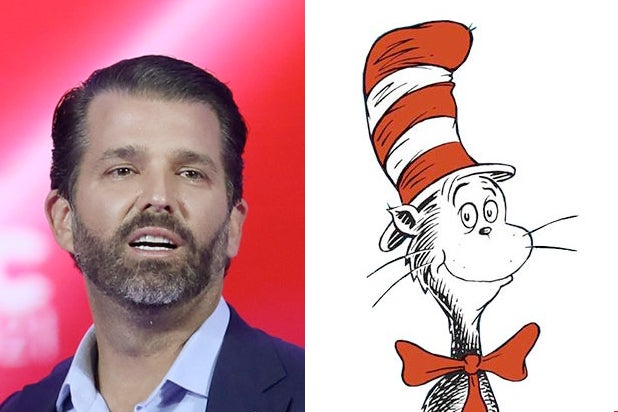 Donald Trump Jr. weighed in on the announcement by Dr. Seuss Enterprises that production on six Seuss titles will cease, saying the move was a result of “cancel culture.”

During an appearance on “Fox & Friends” on Tuesday morning, Trump Jr. expressed his anger and incredulity at “cancel culture” seemingly coming for childhood favorites as of late. “They canceled Mr. Potato Head. This week alone they canceled The Muppets. They’re canceling Dr. Seuss from reading programs,” Trump Jr. claimed.

“I literally know ‘The Cat in the Hat’ by heart, without the book there, because I read it so many times to my children,” he continued. “These things are not racist.”

The six books being pulled from publication are in fact being discontinued due to material deemed racist or insensitive, following criticisms of the ways Black and Asian characters were illustrated in Seuss’s books.

In a statement released by Dr. Seuss Enterprises Tuesday morning, the company said, “These books portray people in ways that are hurtful and wrong” and that the decision was made a year ago, after working with a panel of experts and educators.

“Today, on Dr. Seuss’s Birthday, Dr. Seuss Enterprises celebrates reading and also our mission of supporting all children and families with messages of hope, inspiration, inclusion, and friendship,” today’s statement said. “Ceasing sales of these books is only part of our commitment and our broader plan to ensure Dr. Seuss Enterprises’s catalog represents and supports all communities and families.”

“Cat in the Hat” is not among the titles that Dr. Seuss Enterprises in ceasing production and licensing on. The affected titles are “And to Think That I Saw It on Mulberry Street,” “If I Ran the Zoo,” “McElligot’s Pool,” “On Beyond Zebra!” “Scrambled Eggs Super!” and “The Cat’s Quizzer.”