Dexter: New Blood included all kinds of little references to the original Dexter series. The revival had some surprising twists and turns culminating in a shocking finale. In one of the calmer moments of the final episode, Dexter and Angela look at the moon from different places in Iron Lake. Showrunner Clyde Phillips explained the significance of this scene.

Dexter gets arrested in the ‘Dexter: New Blood’ finale

The walls begin to close in for Dexter Morgan in the Dexter: New Blood finale. Chief Angela Bishop has slowly been connecting Dexter to both the death of Matt Caldwell and the Bay Harbor Butcher case. In episode 10, she places him under arrest for Matt’s murder.

During one scene, Dexter sits in his jail cell alone and looks through his window at the moon. Then the scene cuts to Angela laying on top of her police car and staring at the sky. The moon can be seen in the reflection of the windshield of her car.

Clyde Phillips explains the significance of the moon scene

“Then we cut outside to Angela lying on the police car and we special affected the moon onto the front window of her police car,” Phillips continued. “And they’re looking at the same moon and she goes, ‘Mother f***’ and she gets off of that thing and she bursts into the police station and she calls Batista.”

The moon scene is a callback to ‘Dexter’ Season 4

In the season 4 finale of Dexter, Dexter sends Rita and the kids away from Miami so they will be safe. After he kills the Trinity Killer, Dexter looks up at the moon and has the following internal monologue. 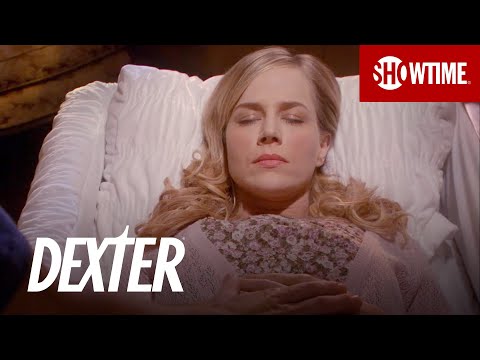 I wonder if Rita’s looking at the same moon at this same moment. I like that – connected by light. The dark passenger’s been fighting against it, trying to keep me all to himself. But it’s my turn now…to get what I want — to embrace my family. And maybe one day not so long from now I’ll be rid of the dark passenger. It all begins with a getaway. Time away from the old me. It’s ok. Life doesn’t have to be perfect, It just has to be… lived.

Unfortunately not long after that Dexter discovers the horrible truth. Rita never actually left town because the Trinity Killer got to her first.