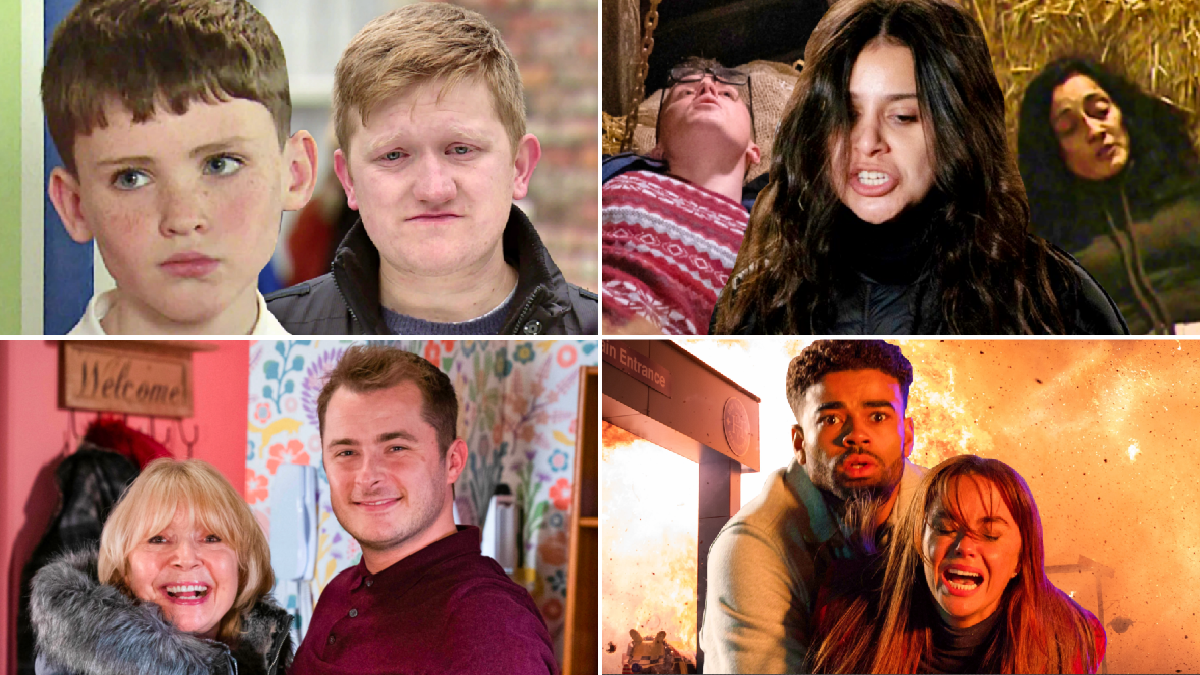 We’re not even two weeks into the New Year, and already the soaps are pulling out all the stops, with five days of explosive drama on the way that you’re NOT going to want to miss!

The question is: who dies?

Speaking of death, Emmerdale’s resident serial killer Meena Jutla is on the cusp of claiming not one, but two lives next week, as she sets out to murder both Manpreet Sharma and Vinny Dingle, the latter who she takes captive in upcoming scenes.

Coronation Street, meanwhile, is rocked by the disappearance of young Joseph Brown, while Summer Spellman makes a devastating discovery.

Ben Mitchell continues to struggle in the wake of recent events over in EastEnders, and while Callum Highway is unable to get through to him, he receives a visit from a dear old friend. But who?

Why, it’s Pam Coker, of course!

It’s a week that takes no prisoners, knows no bounds and delivers the drama in every way imaginable, and if you’re chomping at the bit to find out all there is to know about the explosive events ahead, you’ve come to the right place.

Summer and Amy are horrified to find Max looking at an upskirting photo, and Summer later discovers that the picture in question is of her. Asha insists that she report the incident to the police. Summer, however, feels too embarrassed. Amy, meanwhile, tears a strip of Max for violating Summer’s privacy and looking at the picture, and vows to find out who it is that’s taking and circulating the photos.

Joseph is being bullied at school. Gemma and Chesney later find out about his ordeal, and they’re devastated. Despite the little boy’s pleas, Chesney heads to the school. When Joseph finds out what he’s done, he’s fuming, and soon enough, he’s nowhere to be found! Chesney wastes little time in starting a search, but his efforts prove fruitless. Afterwards, he returns home, filling Gemma in on the fact that Joseph is missing.

Tim spends the night at the cab office, and when he returns home, he reassures Sally he hasn’t gone ‘off’ her. Aggie, meanwhile, offers him some advice, insisting that he return to see the cardiologist, explaining that he’ll tell him what the operation will entail. He ultimately does just that, but upon learning that he’ll receive a letter with a date, he is left incredibly scared.

Vinny, having been taken captive by Meena, is horrified as Manpreet fills him on her sister’s lengthy list of victims. He gives Manpreet his house keys, but the GP loses consciousness as Meena drugs her once more. The following day, however, Manpreet breaks free, and wounds Meena with a piece of wood! But Meena gets the upper hand once more, restraining Manpreet again.

Liam is perplexed to find no trace of Meena’s pregnancy or miscarriage in her medical notes, and when he sees blood seeping through a dressing on her wrist he confronts her. Meena retaliates by threatening to accuse him of sexual harassment, before informing Vinny and Manpreet that Liam’s interference means she’s had to escalate their plans, and thus they’re going to die today. The captives are terrified, as Meena drives the Dingle van into the barn.

Tracy reveals that she’s been offered a a job in Nottingham, and Charity encourages her to take it. Nate, however, is heartbroken to find out that she’s planning on leaving the village with Frankie, and he ends up undermining her about her ability to cope in a new city.

Neil is on the warpath, as he confronts Aaron and threatens Dana’s life, leaving Harvey concerned. Aaron plans to convince the far-right group Neil has lost his mind, and he returns having succeeded. But the catch is is that he now has to take Neil’s place and run the operation from Manchester. Harvey, appalled, begs his son to reconsider.

Ben is struggling in the wake of the attack, and Callum cannot get him to open up. Pam, however, succeeds in doing so, as she drops by, having heard what happened. Ben breaks down in her arms. Callum, meanwhile, speaks to Kathy and Phil, and together they stage an intervention. Ben admits that he is tired of fighting, revealing that he’s scared for his safety.

Mitch and Rocky suggest that Mick get back out into the world of dating, but it’s clear that he’s preoccupied with other things. Rainie, however, overhears, and realising that Mick and Linda have broken up, she confronts the landlord. But things take a shocking turn and Mick collapses, having a panic attack.

The McQueen clan show just how much they stick together when Mercedes saves Cher’s life, but things take quite a turn when they realise that one of their own is still in the building. A heroic act is then made, but a shocking lie has a deadly cost.

The Deveraux clan gather together to celebrate, but little do they know that Toby is readying himself to make an earth-shattering revelation. Before he can do so, however, something catastrophic stops him in his tracks. Subsequent scenes will see Toby make a huge announcement following an explosion, as his close bond with Celeste shines through. And powerful scenes will see the duo get their comeuppance for Lisa’s murder.