Beverley Turner revealed she has ‘no regrets’ over refusing to clap for Captain Sir Tom Moore after he died of coronavirus and pneumonia.

Following his death on February 2, people up and down the country cheered and clapped in memory of the war veteran, who raised more than £32million for the NHS by walking 100 laps of his garden.

At the time, Beverley reacted to the national movement to applaud Sir Tom, by stating that she wouldn’t clap in the street to ‘maintain the fear that imminent death is all around and we’re all in this together. We’re not.’

It comes after Good Morning Britain host Piers Morgan aired his frustration with Beverley for her refusal to clap, branding it ‘pathetic’.

Speaking about the latest headlines on Thursday’s This Morning, Phillip and co-host Holly Willoughby quizzed Beverley over why she didn’t want to clap.

‘I don’t have any regrets,’ the BBC presenter told them. 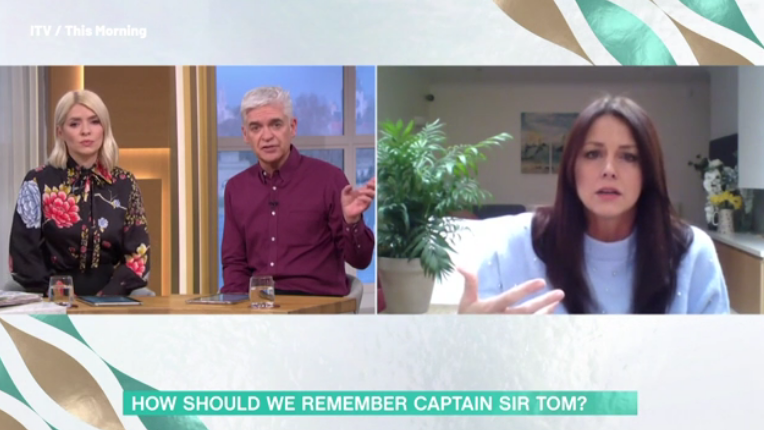 ‘He was a remarkable man, he brought a huge amount of uplift and he showed us that elderly people can do remarkable things.

‘The reason this became such a large story, is a certain breakfast presenter took objections to this.’

‘Why didn’t you clap?’ Phillip asked as he pushed for an answer.

‘It’s a hard argument to make in the 60 seconds we have,’ Beverley replied.

‘The response to this virus has been out of proportion to the deaths.

‘Are you happy with the (Sir Tom) statue?’ Phillip interrupted.

‘Of course,’ Beverley replied. ‘I have defended Sir Tom’s right to go on holiday at Christmas when a lot of people were laying into him, that it was irresponsible.

‘My god, he was 100 years old, of course he deserved one last holiday.’

‘I do not have a bad word to say about such a remarkable gentleman and the people who loved him,’ she added.

‘But, that is a very different issue to being stood on our doorsteps doing the bidding quite frankly of a particular Breakfast TV presenter and the Prime Minister.’

Before she could finish both Holly and Phillip stepped in, as Phillip continued: ‘Well, I am sure he would rather he was here to defend himself.

‘This is only one person, there was a wave of people who may have misunderstood or may have weighed in but he was only one of them.

‘Right, you’ve cleared it up, let’s move on to the next thing.’

This Morning airs weekdays at 10am on ITV.