FETCH the best cutlery, polish the candelabras and put on your sparkliest gown – Downton Abbey is back, and this time on the big screen.

And today we bring you a peek at the film’s starry cast in relaxed and jokey moments between takes, from a book about the making of the most anticipated British movie of year. 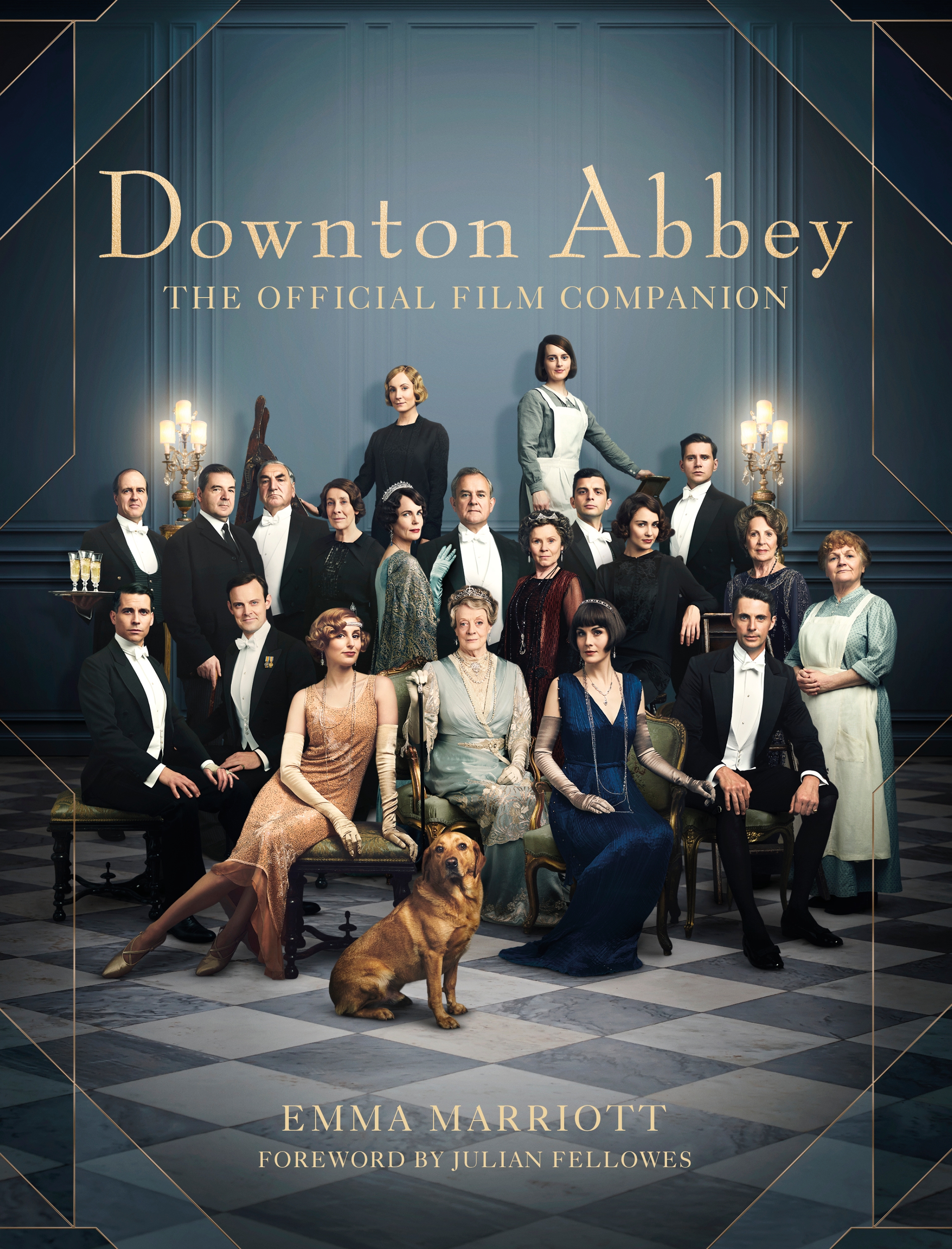 Nearly four years after the ITV period drama came to an end, the new movie version continues the epic saga of the aristocratic Crawley family.

Among the TV cast, Hugh Bonneville as the Earl of Grantham, Michelle Dockery, playing his eldest daughter Lady Mary, and Dame Maggie Smith as the cutting Dowager Countess Violet all return, this time facing the high drama of a visit by King George V to their country estate.

In the film, out on Friday, Lady Mary worries about how to fund repairs to Downton’s leaky roof — whereas there was clearly plenty of money to lavish on the film itself, with a grand ball, a royal parade and a dinner of epic proportions among the extravagance on show.

Director Michael Engler, who worked on the last two Downton TV series, said: “For TV you rely more on close-ups, whereas for the wider screen you can increase the scale of the scenes themselves, adding more crowd scenes, splendour and more of a gala atmosphere.” 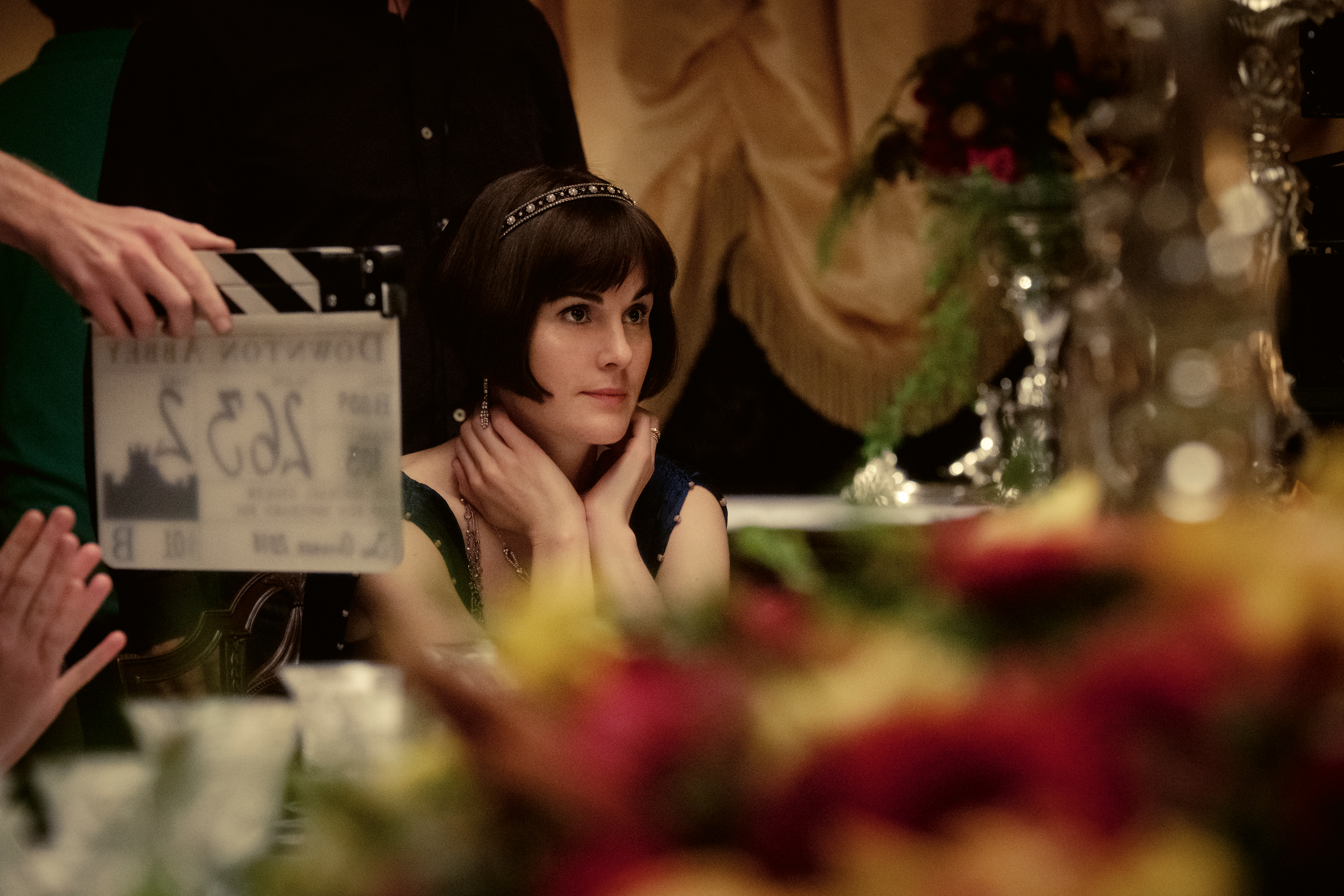 For Michelle and the cast, feasting with royalty was not as thrilling as it may sound.

It took hours to get each scene right, as after every take the production staff had to make sure the amount of food on plates and wine in glasses was the same as in the previous scene.

The actors would become bloated if they polished off the dishes put in front of them over and over again, so instead they nibbled on watercress and cucumber.

WE’RE ABBEY TO BE BACK 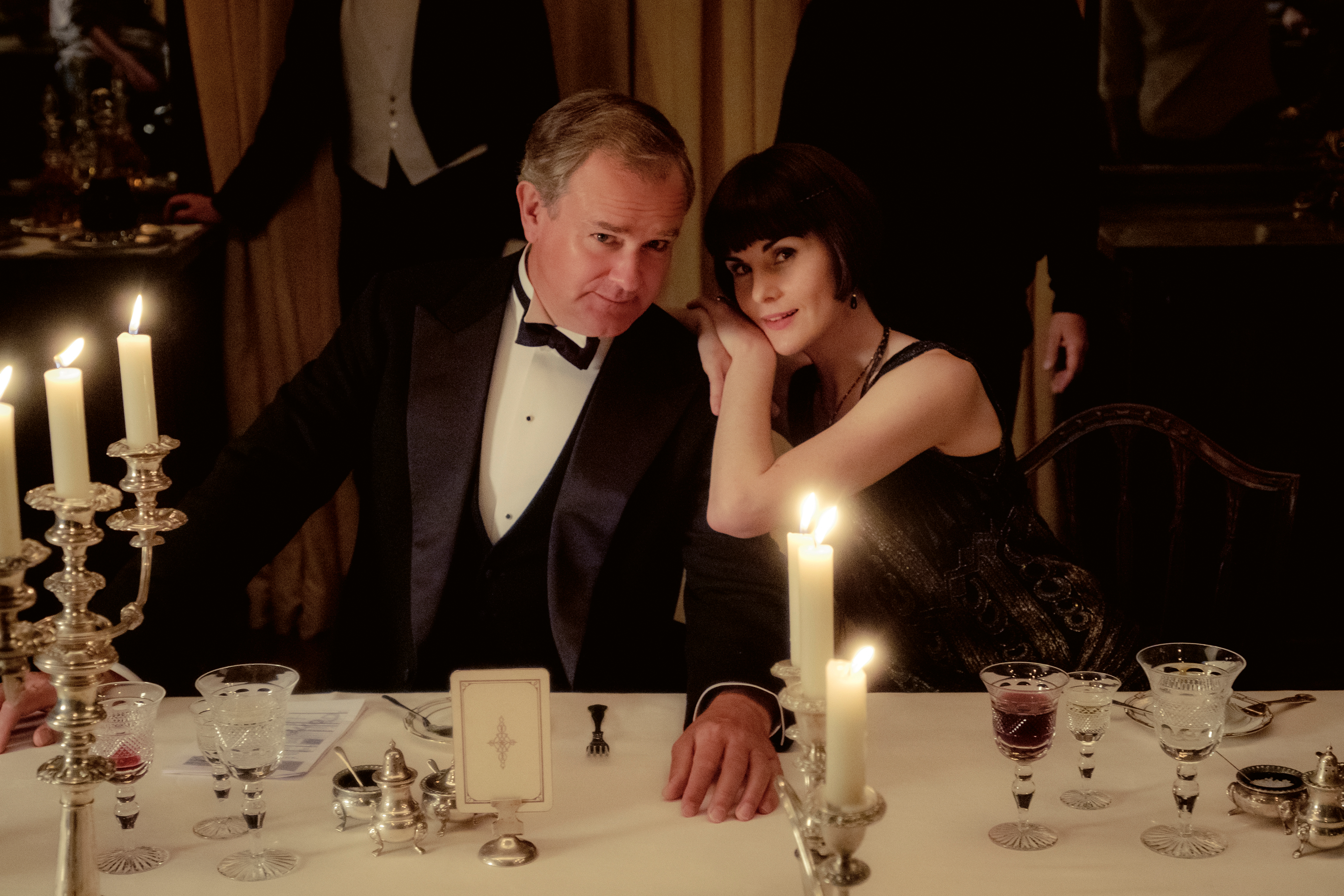 Hugh Bonneville as the Earl jokily mugs for the camera between takes, while Michelle Dockery, as his daughter Mary, playfully drapes herself over his shoulder.

Michelle said it was great to be back with all the “gang” because “we all missed each other”.

She also enjoyed the less formal clothing, saying: “When we first started, we were all in corsets. Now I can just throw my costumes on in the morning.” 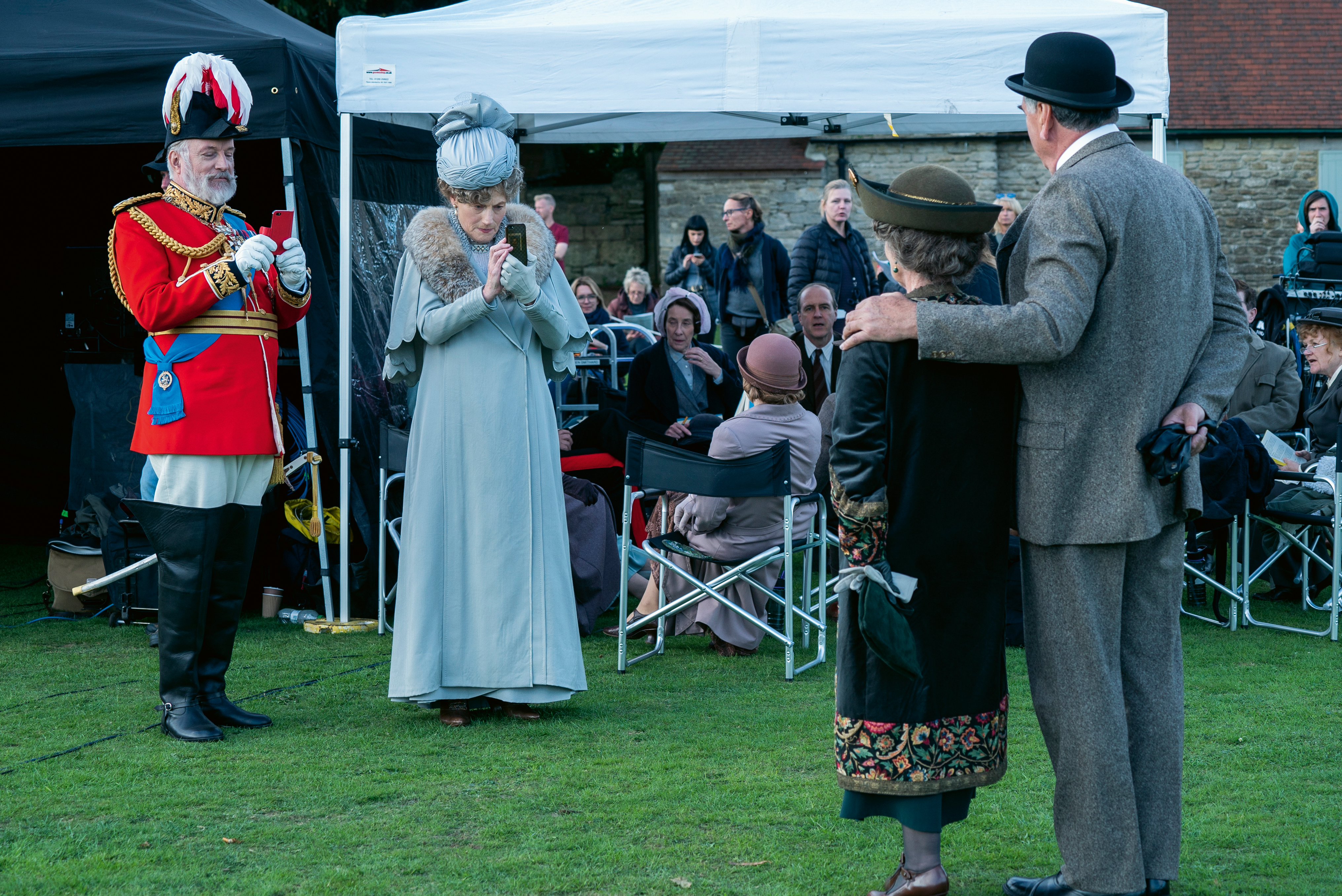 It’s the King and Queen – taking snaps of their subjects!

Simon said: “I did get quite a bit of deference from the extras, almost as if George V had come back to life.” 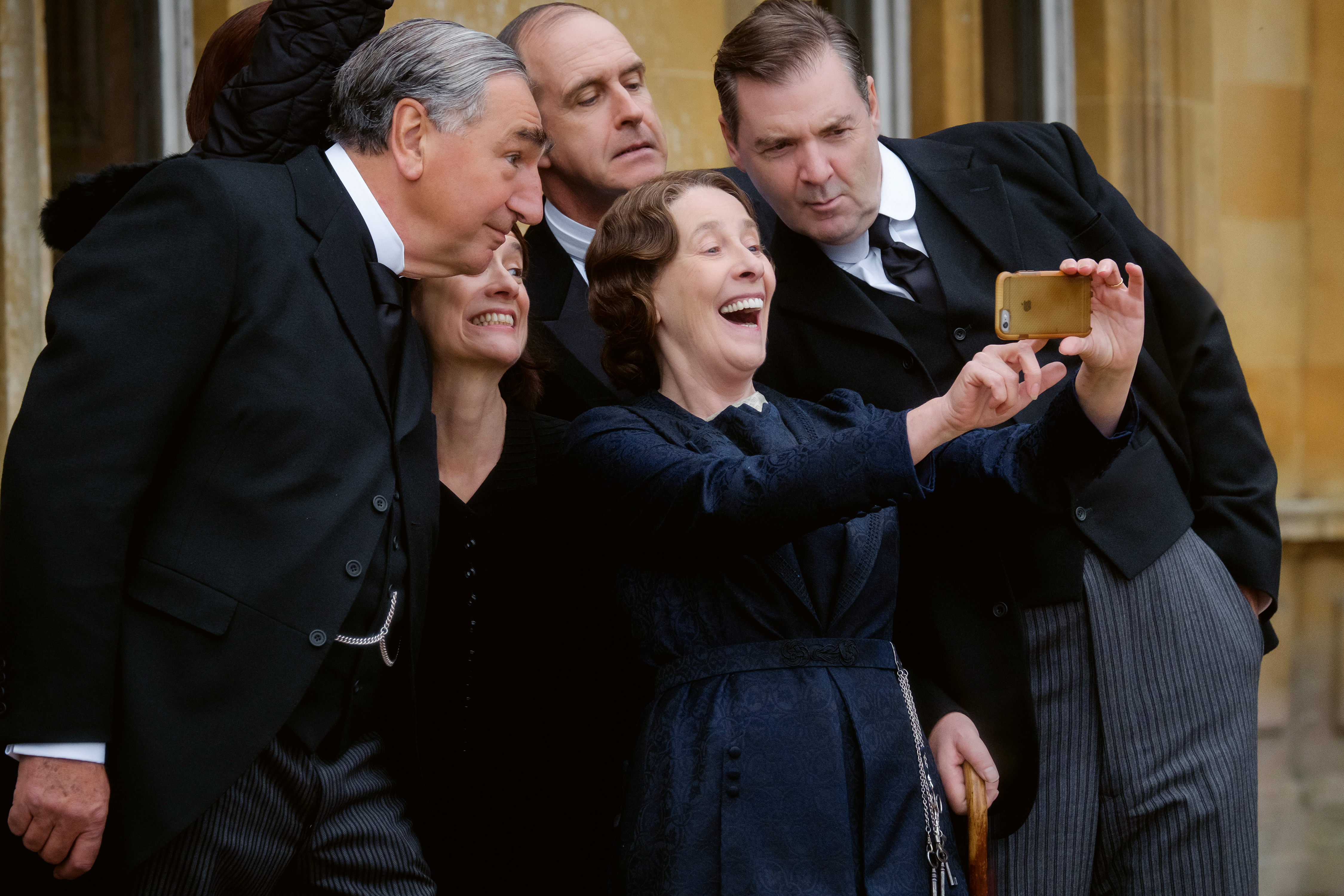 Selfie mania spreads to Phyllis Logan, who plays head housekeeper Mrs Hughes – now Mrs Carson, since she wed the butler – and she snaps away at her team of domestics, including TV hubby Carson, far left.

Jim Carter, alias Carson, said of their final moments at Highclere Castle, where outdoor scenes were filmed: “As the cameras pulled away, there it is, standing resplendent in its own cinematic time warp.”

BIT OF A DOMESTIC CRISIS 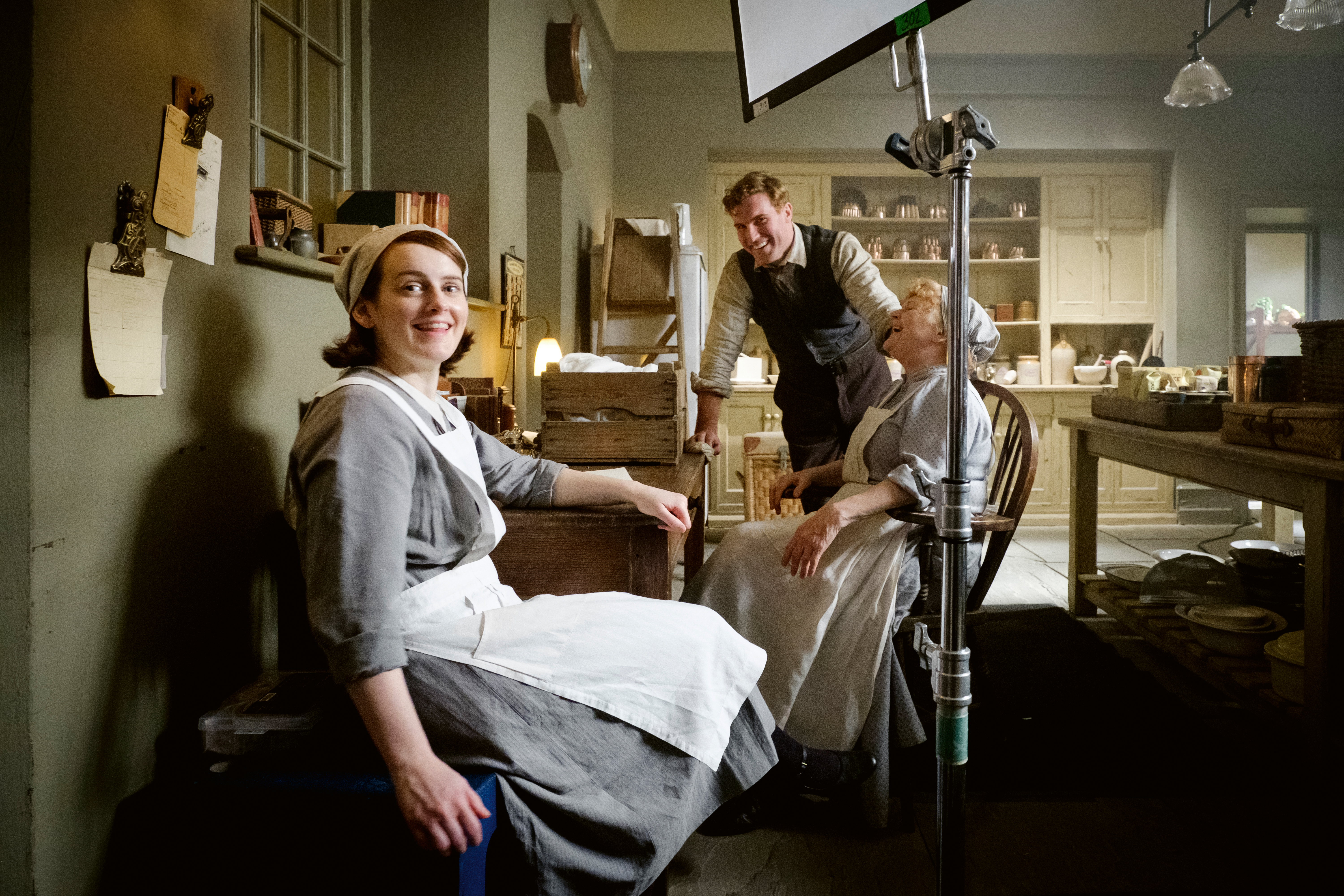 In the new film, young cook Daisy, played by Sophie McShera, has a crucial role in an uprising by the domestic staff.

Fortunately the real-life atmosphere below stairs seems to have been far more jovial – as the smiling cast show in this picture.

The “kitchen” was actually a set at Shepperton studios in Surrey, as were a wine cellar, a silver room, a servery and extra servant bedrooms. 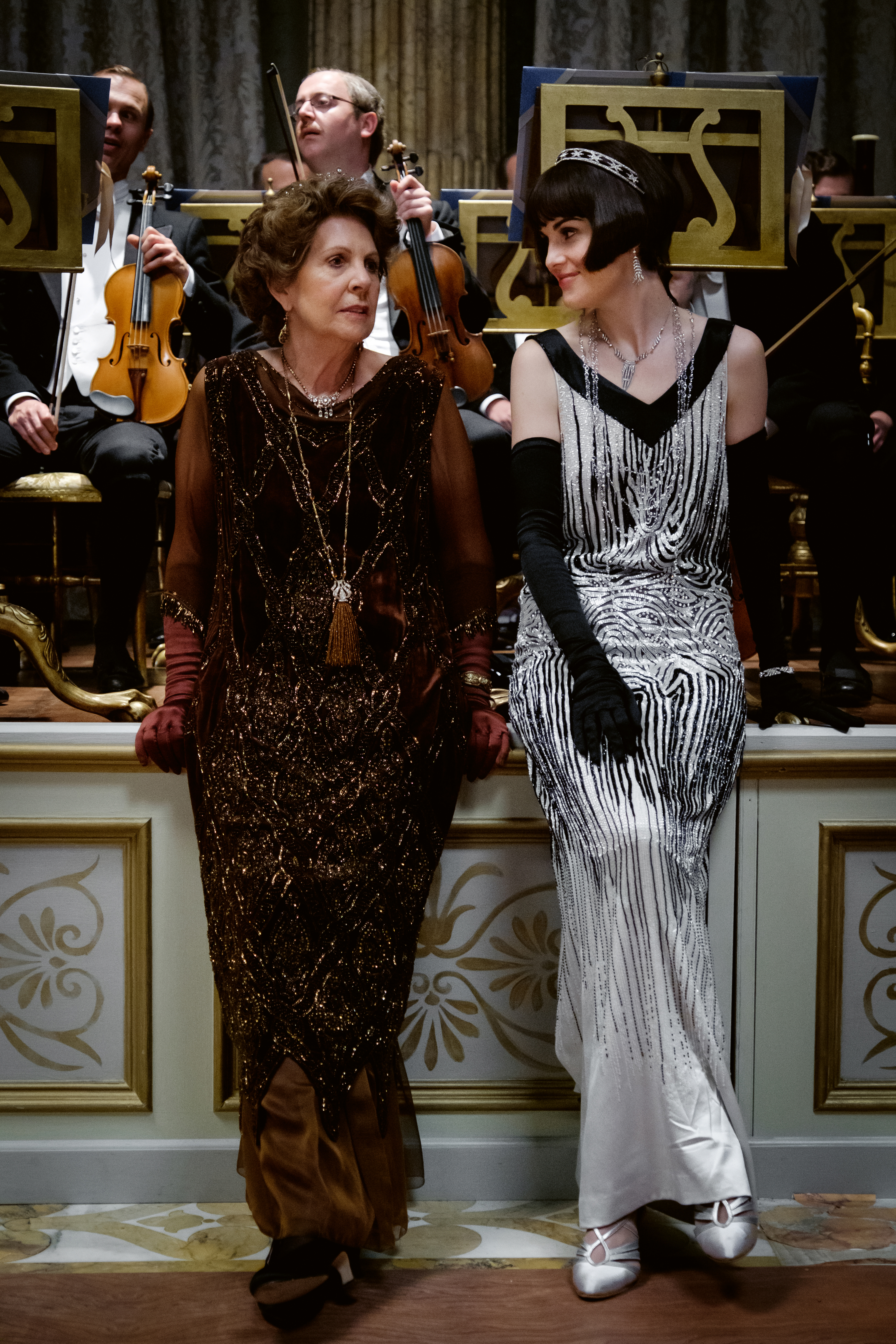 Michelle and co-star Penelope Wilton, who plays Lady Merton, are dressed for a ball but they take the chance to have a chat during a break between takes.

Michelle said: “When Anna said she’d just been to Paris to find pieces for me, I was just chomping at the bit to see what she had brought back.”