Home » Sport » ‘You can’t make me out to be the villain’: Chalmers threatens Simpson’s World Championships dreams

Kyle Chalmers says he shouldn’t be cast as the villain after declaring he will seriously consider lining up in the FINA World Championships in Budapest later this year in a move that could abruptly burst the bubble of former pop star Cody Simpson.

Chalmers, an Olympic champion freestyler, is turning his hand to butterfly at the Australian Swimming Championships in Adelaide as he takes a break from his pet stroke ahead of the Commonwealth Games. 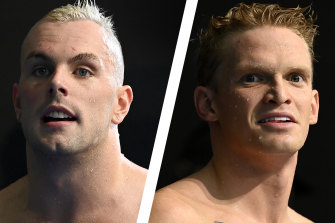 He didn’t have high hopes pre-meet but after finishing second in the 100m butterfly on night one and taking out the 50m fly on night two, in a time of 23.21 ahead of Simpson in fourth place, Chalmers is strongly reconsidering his decision to skip the world titles and head straight to the Commonwealth Games in Birmingham.

That’s bad news for Simpson, who had been a feel-good story on the opening night of the trials after his third-place finish in the 100m butterfly looked certain to book him a ticket on the plane. At that point, Chalmers was not in the running for worlds, meaning Simpson effectively qualified in the top two.

But with Chalmers back in the mix and Simpson’s third leaving him teetering on the edge of the 46-strong Commonwealth Games squad, it will mean an anxious wait for the Gold Coast sprinter before the teams are finalised on Sunday night.

“For me, I have to have a serious sit-down with my coach and team around me and have that discussion over these next couple of days,” Chalmers said. “Obviously I look at my preparation eight weeks ago and I wasn’t in the pool at all, potentially not going to swim at all, potentially maybe never even going to swim again. My shoulders were in a whole lot of pain. I was extremely burnt out.

“Personally I think [going to worlds] is going to be the best thing for me personally moving forward.”

The harsh reality is that Chalmers has every right to change his mind midway through the meet and make himself available for Budapest.

If that means Simpson’s Cinderella story has to wait, so be it. Swimming is a brutal sport and the only thing that matters at the end of the day is the time on the clock. If Chalmers goes to both meets, Simpson must hope there is room on the Commonwealth Games squad, where the Australians can select three athletes in each event.

Chalmers was asked about how his backflip might be perceived and also went into bat for good mate Matt Temple, who won the 100m butterfly event.

“You can’t make me out to be the villain,” Chalmers said. “Yeah, it’s unfortunate that it probably takes Cody’s spot away but it also takes away five other guys’ [places] who were in the race. It’s not just Cody. I think the hard thing is my training buddy Matt Temple is the Australian record holder who won his back to back title last night. There is no attention or hype around him which is for me what I struggle the most with. It’s great there is eyes on me and Cody. The eyes deserve to be on Matt Temple.”

Meanwhile, Zac Stubblety-Cook has produced the swim of his life, breaking the world record in the 200m breaststroke final on a thrilling second night at the Australian Swimming Championships in Adelaide.

Stubblety-Cook, who won gold in the same event at the Tokyo Olympics, went out hard and touched the wall in 2:05.95, shaving 0.17 seconds off Anton Chupkov’s world record that has stood since 2019. It is now the only individual swimming world record held by an Australian male.

Triple Olympic medallist Kaylee McKeown also claimed first place in the 400m individual final, an event she says she will definitely swim in Birmingham at the Commonwealth Games.

Zac Incerti took out the 200m freestyle final, ahead of Elijah Winnington and Mack Horton in third.

And with no Emma McKeon to contend with, Brianna Throssell cruised to victory in the 100m butterfly to earn her first national title in the event, having taken out the 200m last year.

McKeon has skipped the meet having been given a guaranteed slot in the Commonwealth Games team after her record-breaking feats in Tokyo.