Sunday got off to a rocky start when the N.F.L. announced it would delay this week’s game between the Denver Broncos and the New England Patriots because of continuing issues with the coronavirus. The decision led to a cascade of changes in the coming schedule, and is sure to be a frequent topic of conversation as teams adjust on the fly.

As for the games, there were surprising results, exciting action and a comeback by Alex Smith that almost no one predicted. But there was also a devastating injury in Arlington, Texas that appears to have ended Dak Prescott’s season.

Here’s what we learned:

Dak Prescott’s record-setting season is almost assuredly over. Prescott had scrambled for a 9-yard gain in the third quarter of Sunday’s game against the Giants when the Cowboys quarterback had his legs tangle underneath him as he was tackled. His right foot appeared to spin around and the veteran sat on the field clenching his calf as medical staff ran to help him. He was in tears as he was taken off the field on the back of a cart and was replaced by Andy Dalton, who led the team to a narrow 37-34 victory.

Prescott, who threw for at least 450 yards in each of his three previous games — an N.F.L. first — set a record for the most passing yards through the first four games of the season, with 1,690. The outburst of productivity followed an off-season in which he failed to come to terms with Dallas on a long-term contract extension.

No official announcement has been made as to the severity of the injury, but the NFL Network reported that it is a compound fracture near the ankle and that Prescott will need immediate surgery. On top of an arduous recovery, the ramifications of the injury will likely affect Prescott’s contract negotiations with Dallas this off-season.

There is no quit in Alex Smith. A devastating knee injury in November 2018 had doctors contemplating amputating the veteran quarterback’s right leg. His career was declared over by numerous pundits, his team used its first-round pick that off-season on a new quarterback, and the world moved on. That is, everyone moved on except for Smith, 36. He endured 17 surgeries, received medical clearance shortly before the season began, and entered the Washington Football Team’s game on Sunday after an injury to Kyle Allen, throwing an official pass for the first time in 693 days.

Smith was well short of the longest gap between passes, which according to the Elias Sports Bureau belongs to Tony Adams, a career backup who went 3,276 days between attempts (Oct. 15, 1978, to Oct. 4, 1987). But when you factor in just how unlikely Smith’s return was, his so-so passing day in a 30-10 loss to the Los Angeles Rams was nothing short of phenomenal. 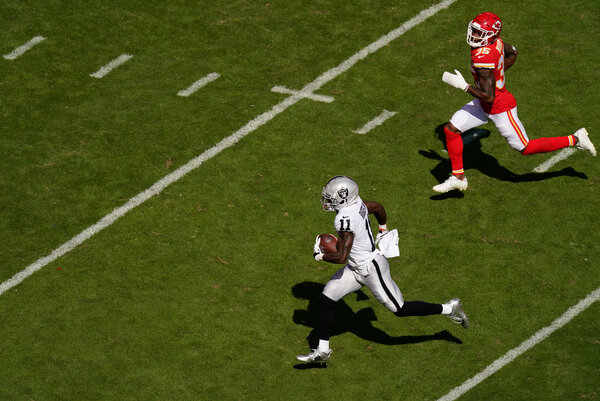 Kansas City needs to work on its concentration. The Chiefs opened their Super Bowl defense with four consecutive wins, including a dominant effort that ended Baltimore’s 14-game regular-season winning streak. But on either side of that win over the Ravens, the Chiefs had to survive an overtime scare against the Chargers in Week 2 and then struggled for much of the game against the Cam Newton-less Patriots in Week 4. On Sunday, that tendency to play down to their competition caught up with the Chiefs in a big way, as the Las Vegas Raiders, who came in as 13-point underdogs, threw everything they had at the Chiefs, running up a lead and then staving off a Patrick Mahomes comeback for a shocking 40-32 win at Kansas City.

It was just the 11th time the Chiefs allowed 40 or more points at Arrowhead Stadium, and Derek Carr was the first Raiders quarterback to top 300 yards passing at Kansas City since Rich Gannon in 2002.

The Ravens don’t need a huge day from Lamar Jackson to be dominant. Jackson was far short of his best on Sunday. While he had 180 passing yards and two touchdowns, he barely completed 50 percent of his passes (19 for 37), threw an interception and very nearly threw at least two more picks. He carried the ball two times for 3 yards — and the Baltimore Ravens still beat the Cincinnati Bengals, 27-3.

The strangely quiet game from Jackson was more than offset by his team’s running right over Cincinnati’s defense (24 carries for 161 yards), while Baltimore’s defense emphatically reminded Joe Burrow that he’s a rookie. Last week, Burrow became the first rookie quarterback to throw for at least 300 yards in three consecutive games. This week, he managed just 183 yards passing and was sacked seven times.

The Jaguars are good for your self-esteem. Houston had been in disarray, starting the season 0-4, which resulted in the firing of Bill O’Brien, who had been serving as the team’s coach and general manager. Under O’Brien the Texans seemed lost on both sides of the ball and looked gutted after having won the A.F.C. South in three of the previous four seasons. A switch to Romeo Crennel, 73, at head coach is not yet permanent, but he started off his reign as the oldest head coach in N.F.L. history with a convincing win, as Deshaun Watson threw for 359 yards and three touchdowns while leading Houston past Jacksonville, 30-14. The big question is if Houston can do anything like this against a team that fields something resembling an N.F.L. defense.

It is not always the guys you expect. You’d be forgiven if you’d never heard of Travis Fulgham or Chase Claypool before Sunday. Fulgham, a second-year wide receiver for the Eagles, was a sixth-round pick of the Detroit Lions in 2019 and was waived twice (once by Detroit, once by Green Bay) before ending up in Philadelphia. Claypool, a rookie wide receiver for the Steelers, was a second-round pick this year. They came into the day with a combined eight career receptions, but more than doubled that as they squared off in one of the more unlikely and entertaining battles you’ll come across.

Fulgham was all over the field, catching 10 passes for 152 yards and a touchdown as he powered a Philadelphia offense that looked surprisingly good against Pittsburgh’s stout secondary. But that was nothing compared to Claypool, who had seven catches for 110 yards and three receiving touchdowns, while running the ball three times for 6 yards and a fourth score.

Claypool’s fourth touchdown of the day came on a 35-yard pass from Ben Roethlisberger, and it put the game away for Pittsburgh in a 38-29 victory.