ALEJANDRO VALVERDE crashed out of the 2021 Vuelta a Espana in terrifying fashion on Friday.

In the mountains of south-eastern Spain, the veteran was in full flow on a tricky descent when he lost control of his bike. 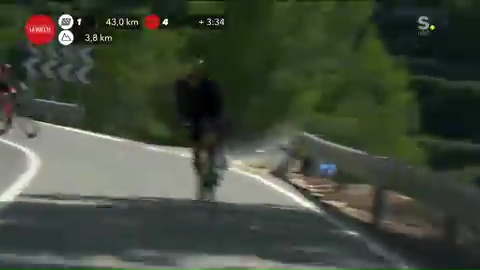 The Spaniard, who won the Vuelta in 2009 and has four Tour de France stage victories to his name, skidded off the road in painful fashion.

The metal barrier protecting the cyclists from a sheer cliff edge had briefly given way at that point, meaning that there was nothing to hold him from the huge drop.

Fortunately, 41-year-old Valverde only slid a few feet down the incline before he was able to get back to his feet and be helped up by team-mate Jose Joaquin Rojas.

The Movistar rider gingerly clambered back up the slope and was clearly in pain as team members stopped to check on his condition.

It has been suggested that he hit a bump as the bend began, and his bike appeared to momentarily bounce as he chased down Richard Carapaz for the lead.

The crash came 42 kilometres from the end of the seventh stage and Valverde bravely carried on after refusing a replacement bike.

But his battle against the pain was a brief one and he pulled out of the competition a few kilometres down the road, agonisingly close to reaching his hometown of Murcia.

Valverde, with his uniform bloodied and scuffed from the crash, was filmed in tears after being unable to continue.

Team Movistar confirmed via its Twitter page: "You have tried, but it will not be possible.

"After receiving the OK from the race doctor, and after covering a few kilometers with several of his team-mates, Valverde has been forced to leave the Vuelta." 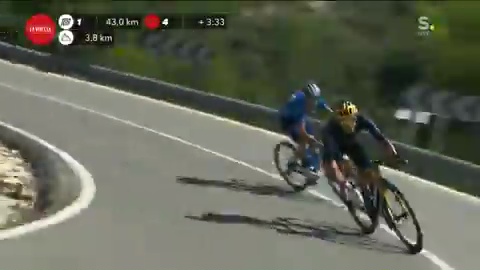 Fans added their encouraging messages online after one of road cycling's most famous sons suffered the blow.

Valverde was fourth in the overall standings ahead of the mountain stage.

Michael Storer went on to win the seventh stage with Primoz Roglic out in front in the general classification ahead of Saturday's flat ride to La Manga.