Home » Sport » Vixens claim win on the road over Giants

A dominant display from skipper Kate Moloney and wing attack Liz Watson has guided the Melbourne Vixens to a comprehensive 66-57 Super Netball win over the Giants in Sydney.

Moloney was at her stellar best with 21 assists and two interceptions at the Quaycentre on Saturday, but it was Watson who was the star of the show with 32 assists of her own as the Victorians cemented their spot in the top four. 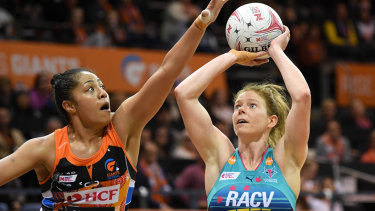 Tegan Philip of the Vixens shoots during the Melbourne club’s win over the Giants in Sydney on Saturday night. Credit:AAP

The integral duo provided shooters Caitlin Thwaites (40/42) and Tegan Philip (26/29) with ample chances throughout the dour affair, and it was a performance that will no doubt put the rest of title contenders on notice.

The Giants were poor across the court in the opening half and struggled to get themselves into the contest through cheap turnovers and a lack of cohesion.

Even Australian Diamonds star Caitlin Bassett was spelled temporarily at the start of the second quarter for wing attack Kiera Austin, who nailed 13 from 14.

In contrast the Vixens were excellent after overcoming a tentative start, as they moved the ball around well to give Thwaites and Philip and giving plenty of opportunities to build a 12-goal buffer at half-time.

The Giants limited the damage in the third term but still trailed by 14 heading into the final 15-minute quarter, a margin that proved insurmountable.

Giants shooters Bassett (20/22) and England international Jo Harten (24/27) next play on opposing sides at the upcoming World Cup, as Super Netball takes a break to allow focus to fall on the sport's global showpiece.