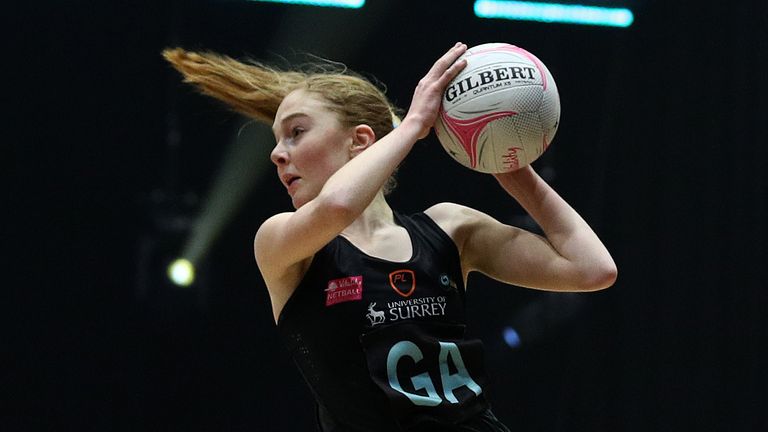 Surrey Storm, Team Bath Netball and Strathclyde Sirens all secured victories on the second day of the Vitality Netball Superleague season in Wakefield on Saturday.

The trio joined Leeds Rhinos Netball and Manchester Thunder in making winning starts to their 2021 campaigns as a bumper weekend of action continued at Studio 001.

London rivals Storm and Pulse duked out a thrilling first match of the day, with Storm coming out on top, before Team Bath Netball showcased their title credentials against Dragons.

Last on court, were Severn Stars and Strathclyde Sirens. The two did not disappoint as they pushed each other to the wire, before Sirens secured victory.

The bumper start to the season continues on Sunday with three more matches all available to watch via the Sky Sports YouTube channel, before Monday’s two contests are live on Sky Sports Mix.

The teams had met in one of the few games to be contested in the 2020 season and, after Pulse won 12 months ago, it was Storm who gained their revenge with a 42-40 victory.

Kelly, part of the England U17 and U19 squads, came on to make her Superleague debut when Storm’s starting goal attack Emma Magee suffered a painful leg injury after just four minutes, but the teenager was never fazed.

Having made a blistering start to the cancelled 2020 season, Pulse were keen to pick up where they had left off but it was Storm who started the faster, responding to Lefebre Rademan opening the scoring with a blistering run of seven unanswered goals.

Trailing by four after the opening 12 minutes, Pulse then fell six behind before they were finally able to chip away at Surrey’s advantage. Coach Sam Bird turned to Kira Rothwell for Rademan as she tried to get some control against a Storm defence which had Leah Middleton and Niamh Cooper impressing.

Player of the Match – Sophie Kelly

Belying her age, the 16-year-old slotted in seamlessly alongside Karyn Bailey to keep Storm competitive throughout a physical match-up and it was fitting she scored the goal that sealed victory in the final seconds

Sigi Burger drew Pulse within one and Rothwell was on hand to level the scores for the first time since the opening exchanges, but Storm recalibrated and held on to lead by two at half-time.

Pulse continued to create the clear-cut openings, but were wasteful in the shooting circle, in contrast Karyn Bailey and Kelly were relentless in taking the chances that came their way. Midway through the third quarter Pulse managed to sneak their way into a lead for the first time since the opening score thanks to a three-goal burst from Burger.

Bird’s team held onto their advantage, Olivia Tchine helping them into a one-goal lead going into the final quarter and then a two-goal advantage through the early stages of the last 12 minutes.

At 16-years-old, Sophie Kelly looked right at home on a @NetballSL court. 👏

Outstanding @SurreyStorm debut from @mikki_austin's GA – what a platform it sets for her.

Storm drew level at 35-35 and made their decisive move in a low-scoring contest with a 5-1 run giving them a lead which Pulse could not overturn – despite a couple of late chances to force a draw that typified their afternoon’s work with the feed into the circle letting them down.

It was not to be for Pulse who are back in action next Sunday, while Storm look to maintain a 100 per cent start in less than 24 hours when they face Saracens Mavericks.

Vitality Superleague – Round One fixtures & results

Anna Stembridge’s Bath outfit, like Pulse and Thunder, had enjoyed a flawless start to the 2020 season before its cancellation, and they underlined why they are among the favourites for the title with a 61-29 win over the Dragons.

Early on both teams made mistakes, as many have done after so long without competitive action. But as the opening quarter wore on, Bath began to up their tempo in attack and work their full-court press well.

On her Superleague return, England co-captain Serena Guthrie enjoyed a great deal of space in the goal third and thrived, feeding the potent partnership of Sophie Drakeford-Lewis and Kim Borger effortlessly.

The result of Bath’s slick work was a six-goal advantage, but as Annika Lee-Jones started to use her height more in the circle and Dragons looked to Amy Clinton earlier in attack, the Welsh team finished the first quarter strongly to hold Bath to a 13-9 advantage.

Welcome back to the court @EboniBChambers 👏🏾!! 💙💛

The start of the second quarter saw Eboni Usoro-Brown, who has been documenting her journey back to elite netball after giving birth, return to court and the seasoned international fitted effortlessly into the Bath defensive end. The most decorated side in Superleague history then put their foot on the gas.

Imogen Allison worked hard in defence, while Borger got the better of Lee-Jones up front, and, as was the case on Friday night against the Rhinos, Dragons found themselves staring at a large half-time deficit.

At 31-15 down, Tania Hoffman used the break to make wholesale changes. Christina Shaw showed her versatility as she moved from WD to GK, while Claire Jones donned the WD bib, with Sophie Morgan and Shona O’Dwyer completing a new-look mid-court.

They were slick, really slick. Bath were accurate, composed and they made their possession count. What I also loved was their work in their defensive end, for example Imogen Allison turned over so much ball in that first half.

In what looks like becoming a theme through the congested season, Stembridge also decided that the third quarter was the time to mix things up, with Betsy Creek, Charlie Curtis and Abi Robson arriving in place of Borger, Tash Pavelin and Guthrie.

The changes did little to loosen Bath’s hold on the game, instead their speed of play and pressure emptied a tired Dragons energy reserves and they charged over the finish line, with plenty in the tank for Sunday’s mouthwatering clash against Loughborough.

Strathclyde Sirens built on the positives of their first match on Friday night and edged out Seven Stars 36-30 in a cracking contest to finish the day.

It was clear from the onset that the match was going to be hotly contested from post to post.

Brilliant opening weekend @SirensNetball 😊 think teams will be taking note for sure 👀 apart from my gals @Lynsey_G & @bethgoodwin47 smashing it as always..SO impressed with Taylor Cullen in defence AND attack 👏🏽🚨

Despite good pressure from Lucy Herdman, Sirens’ Bethan Goodwin and Lyndsey Gallagher remained confident with their shots and, at the other end, Liana Leota set the tone for Stars with her feeds into Georgia Rowe.

Although Sirens found a two-goal edge midway through the quarter, they were hauled back in and just a single goal separated them after the opening 12 minutes.

In the second quarter, Towera Vinkhumbo did her utmost to provide Sirens with the ball they needed to fully break free, but Stars stayed firm.

As the quarter played out, it remained tense and tight before the Scottish outfit finished stronger and created a 19-16 half-time advantage.

Saturday done & dusted. Sirens👏🏼👏🏼Patience in attack, hustle in defence. So many chances to push on so getting over the line will fill them with so much confidence. Stars need to regroup quickly as they face wasps tomorrow, they just never found the attacking answers @SkyNetball

After the interval. Melissa Bessell introduced Lucy Harris at C and Iman Thomas at GD, while Karen Atkinson decided to stick with the same line-up. Sirens’ consistency paid dividends, as Vinkhumbo put doubt in Stars’ minds, and the Scottish outfit duly created a four-goal cushion.

From a position of 26-22 in their favour, the final quarter was a test of nerve for Sirens and Stars.

The introduction of 18-year-old shooter Goodwin proved to be a masterstroke from Sirens’ technical director Atkinson and that change in attack turned the game.

Goodwin created a great target in the circle and although Stars never gave up, Sirens were able to finally move away and secure the victory they desired.