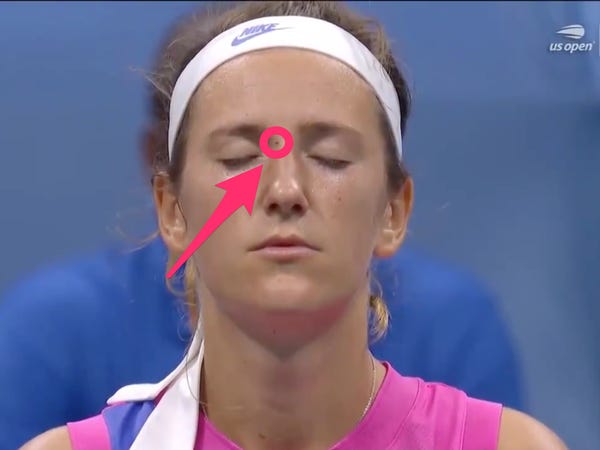 Beating the best tennis player in the history of the game is no easy feat. That pressure wasn't lost on Victoria Azarenka as she mounted an epic comeback against Serena Williams during their US Open quarterfinal matchup on Thursday.

The Belarusian veteran said she resolved to "bring the intensity up" after Williams jumped to an early 4-0 lead in the first set. That intensity manifested in unbreakable focus for Azarenka, helping her climb out of the hole. But it also resulted in a rather bizarre moment in the third set.

Williams took a medical timeout one game into the set, after tweaking her left Achilles tendon. Azarenka was so intent on maintaining her concentration that she sat with her eyes closed as trainers re-wrapped her opponent's foot. When the cameras panned to the 31-year-old during the broadcast, they captured a fly walking across the bridge of Azarenka's nose — and she didn't even flinch.

After the match, a WTA reporter asked Azarenka what she thought about as she sat with her eyes closed during those moments.

That steely resolve undoubtedly fueled Azarenka's stunning comeback against Williams, one of the fiercest competitors tennis has ever seen. Azarenka exploded out of the gates to secure the second set six games to three, then took over in the final third.

"Intensity was important today to bring it up," she said. "I'm glad that worked out for me."

She acknowledged that Williams "dug me in a big hole in the first set — I had to climb my way out of there one by one."

But Azarenka added: "We both know that the match is never over. I knew it wasn't going to be over at 5-3 either. I've been there before so, today was going to be different."

She has another tough battle ahead though: against world No. 4 Naomi Osaka in the US Open final on Saturday. The pair have met three times before, with the 22-year-old superstar besting Azarenka head-to-head two matches to one.