Home » Sport » Tommy Lasorda Was a Celebrity. He Was Also a Leader.

Tommy Lasorda was born on the first day of fall, the season that matters most in baseball. Many years later he would make a lasting autumn imprint, but on that day, in 1927, the Brooklyn Dodgers lost a doubleheader. Lasorda, from Norristown, Pa., would grow to be a scrappy left-handed pitcher for the team, but he would never win for them, either.

Like Walter Alston, his predecessor as manager of the Los Angeles Dodgers, Lasorda appeared only briefly as a major league player. Alston was hitless in one at-bat; Lasorda was winless in a handful of starts. Yet they managed the team in an unbroken line from 1954 to 1996, combining for all six of the franchise’s championships before 2020.

“Their strength was the strength of the Dodgers: They knew the minor league system, they knew how players got to be major leaguers, they understood the importance of scouts and player development — they knew it from the ground up,” Fred Claire, the former Dodgers general manager, said on Thursday. “Their personalities were different, but their foundations were nearly identical.”

Until Lasorda’s death at home on Wednesday, at 93 years old, he was the senior member of the Baseball Hall of Fame. If there really is a Dodger blue heaven, as he always claimed, he could look down at the world and see his old team on top of it. He was watching from a ballpark suite, in Arlington, Texas, when the Dodgers clinched the World Series last October.

“I think he needed to be there, you know?” Bobby Valentine said on Thursday. “Just like he needed to get home from the hospital to be with his wife, so she could say it’s OK.” 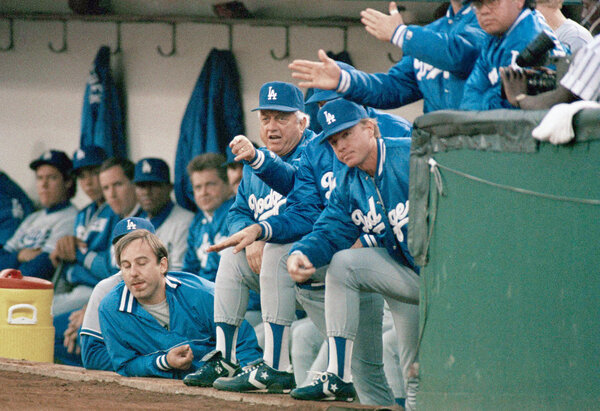 Valentine, the longtime major league manager, was with Lasorda at Globe Life Field; a mutual friend, Warren Lichtenstein, had arranged for Lasorda to take a private plane to Texas, with a doctor by his side at all times.

“He didn’t stand — we wheeled him in, and he sat the entire time — but with one out or maybe two outs in the last inning, he stood, and he watched the game standing, and when they won he threw both hands up over his head and said: ‘Oh yeah!’” Valentine said. “That ‘Oh yeah,’ for anyone who was ever around him, that’s what he was saying when he was running out of the dugout after they won: ‘Oh yeah, we did it!’”

Lasorda’s teams won 1,630 games in the major leagues, postseason included. He guided the Dodgers to seven division titles, four World Series appearances and two championships, in 1981 and 1988. In retirement, he managed the United States baseball team — mostly minor leaguers — to gold at the Sydney Olympics in 2000.

With Lasorda, though, the games were only part of the story. He was a genuine celebrity, a friend of Frank Sinatra and Don Rickles who always knew where to find a camera. He could share wisdom as a pointy-capped wizard on a children’s TV show (“The Baseball Bunch”) or spew profane hilarity at a reporter who dared to ask for his opinion of a rival’s performance. Jon Lovitz played him on “Saturday Night Live.”

Lasorda had a thing about mascots. In 1989, he ordered the umpires to eject Youppi! — a jolly orange blob in a Montreal Expos jersey — for noisily cavorting on top of the Dodgers dugout. A year earlier, he wrestled the Phillie Phanatic to the turf at Veterans Stadium and beat him with a stuffed Dodgers dummy.

Lasorda and the Phanatic, then played by Dave Raymond, had formed an act, of sorts, on a Major League Baseball goodwill trip to Japan in 1979. The mascot would mock the manager, whose feigned outrage got a laugh from the fans. But Lasorda snapped that day in Philadelphia, and an all-time highlight was born.

“All the other times I was interacting with him, he was really doing it with tongue in cheek, but I knew he was mad because he was using my name and he strung together a few choice expletives,” Raymond said on Thursday. “I was kind of confused — ‘I think he’s really angry!’ — and when my head almost came off, I was really angry. So the next few innings, I had the dummy up on the Phillies dugout and I was feeding it pizza. At that point, I’m like, ‘OK, you started it.’”

Years later, when Lasorda spotted an out-of-costume Raymond in a hotel lobby at baseball’s winter meetings, he regaled friends with a blow-by-blow recap of their brawl. It was all part of the show with Lasorda, who would always ask Raymond about his father, Tubby, the longtime football coach at the University of Delaware.

“The biggest sadness — beyond his family and his close friends and the Dodger family — is for baseball, because Tommy was the best ambassador,” Raymond said. “We don’t have people like Tommy Lasorda or Earl Weaver or Tug McGraw or Jay Johnstone anymore. Those types of people seem to be weeded out. With travel sports and the emphasis on performance and analytics and all that, we’re losing some of the best parts of baseball, some of the things we’d latch onto as kids. There was this wonderful window frame that personalities like Tommy gave to the game.”

Valentine — himself a colorful character — agreed with that idea but emphasized Lasorda’s role as a visionary who saw far beyond the hills overlooking Dodger Stadium. He held clinics around the globe, learned Spanish and championed players like Fernando Valenzuela, one of baseball’s first stars from Mexico, and Hideo Nomo, the first M.L.B. All-Star from Japan.

To Valentine, Lasorda was following the lineage of Branch Rickey, the Hall of Fame executive for the Dodgers and other teams who brought Jackie Robinson to the majors and created a blueprint for the modern farm system.

“Tommy was carrying the baton of doing things differently,” Valentine said. “He was an old Italian who had old Italian ways, but somehow, with a high school education, he knew that the world was changing and that baseball needed to change with it.”

Lasorda’s most profound legacy, perhaps, is in the way he changed the role of manager. While Alston could be distant and taciturn, Lasorda was an unabashed cheerleader for his players, creating an environment where young players thrived, and motivating players as few could.

The 1988 World Series, against the imposing Oakland Athletics, was Lasorda’s masterpiece. The Dodgers stole Game 1 on Kirk Gibson’s spellbinding homer, and pitcher Orel Hershiser dominated the A’s twice. But their other win, in Game 4, was all Lasorda, whose patchwork lineup had fewer homers put together than Oakland’s Jose Canseco had all by himself.

On the NBC pregame show, Bob Costas praised the Dodgers’ pitching but called their lineup “one of the weakest ever to take the field for a World Series game.” Lasorda, who was watching in the clubhouse, rattled the walls with a fusillade of grievances.

“You hear what Costas said? He said you’re the worst offensive team ever!” said Mickey Hatcher, the super-sub batting third, recalling Lasorda’s tirade recently. “Oh, man, he was stirring it up. And of course when we were out in the dugout, the players were yelling and Costas didn’t know what the heck was going on. But Tommy kept feeding everybody.”

Costas finished the pregame show from his spot on the first-base side of the grass, by the visitors’ dugout. He stayed on the field for the national anthem, having no idea Lasorda had seen his analysis, let alone used it to rally the Dodgers.

“I’m standing next to Hershiser, who’s at the end of the line with his cap over his heart during the anthem,” Costas said recently. “And he looks down over his shoulder and out of the corner of his mouth he goes, ‘Boy, Tommy’s really got the guys going over what you said.’ And I’m startled, like, ‘What the hell is he talking about?’

“Then they won, and Lasorda makes a big deal about it afterward on TV with Marv Albert. And the whole time he’s winking at me!”

The Dodgers ran the bases with abandon that night, scratching out runs on a passed ball, an error and two ground outs. They clinched the title one game later, and when they finally reclaimed it, at long last, their biggest fan was there.

“What it was about Tommy, more than anything, was his passion and love for the game,” Claire said. “It’s what drove him, it’s what enabled him to play professional baseball to begin with, it’s what he had as a youngster, and it’s what he never lost.”