Emma McKeon is an unlikely temptress. She does not wear diamonds, like Elizabeth Taylor, or a vial of blood like Angelina Jolie. She wears Speedos, goggles and Eau de Chlorine, and has spent much of her life doing laps of suburban pools. Her hard work and personal sacrifice have made her one of the best swimmers in the world.

But McKeon competes for country with an appetite for soap opera from its swim team. In the 1980s, magazines frothed over Lisa Curry and Ironman Grant Kenny, and in the 90s it was Kieren Perkins and Samantha Liu. In the 2000s, gossip columns reported the dating dramas of accused “party girl” Stephanie Rice. The scrutiny continues well after the athletes hang up their gold caps, as Ian Thorpe, Grant Hackett and Michael Klim can attest. 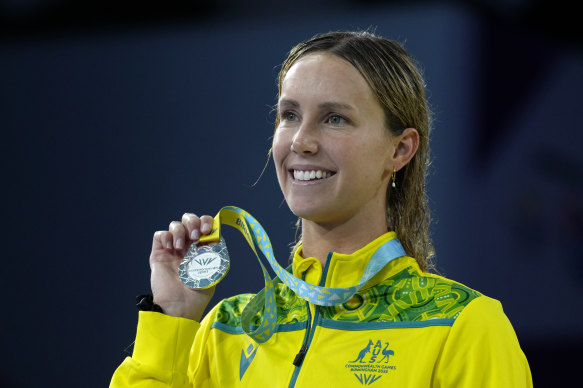 Emma McKeon is an unlikely temptress.Credit:AP

At the Birmingham Commonwealth Games, McKeon’s love life had all the elements of a cracking story. A beautiful heroine. A rugged ex-boyfriend, Kyle Chalmers, with “only the strong survive” tattooed – in German – across his chest. A new love in pop-star swimmer Cody Simpson, who has dated celebrity models and musicians. And an apparent early snub on the pool deck, when the body language between the two exes was interpreted as frosty.

The ensuing “love triangle” drama almost overshadowed the team’s performance, and tested its focus. Chalmers was furious, and made it known. McKeon shed quiet tears. Swimming Australia’s handling came under attack. Journalists’ ethics were questioned. Amid the fallout, the sport’s administrators will need to ask themselves the question; could – or should – they have done more to protect their athletes from the frenzy?

A biennial obsession with swimming, at the Olympic and Commonwealth Games, is a particularly Australian peccadillo. Perhaps it’s that swimming is the country’s gold mine, and shows the world that the little nation down under, with its chronic cultural cringe, can punch above its weight. Part of the attraction may also be that Australians have traditionally spent summers in pools – we have more per capita than any other country – and so can see ourselves in our swimmers, diving off the blocks and chasing that black line.

The president of Swimming Australia, Tracy Stockwell, won three gold medals in the pool for America in 1984. In the swimming world, it was a huge deal. In the wider world of the United States, with its big, national sports and highly paid, superstar athletes, it was less so. “When I moved to Australia more than 30 years ago, that was one of the first things I noticed,” she says of the difference between the two countries. “We are a swimming nation.” 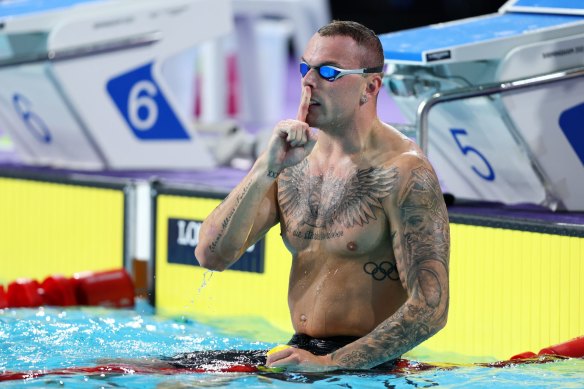 Kyle Chalmers silences his critics with his performance in the pool.Credit:Getty

Australia has had swimming celebrities for a century. Boy Charlton. Annette Kellerman. Fanny Durack, who was, from 1910 to 1918, the world’s greatest swimmer across all distances. And, of course, Dawn Fraser, who, with two fellow team members, souvenired an Olympic flag in 1964 and was chased by the constabulary.

Swimming “golden girls” were big business in the 1980s and 90s, when the more popular ones earned good coin by selling an exclusive about their new love or heartbreak to cashed-up, warring women’s magazines. Those deals came with contracts that stipulated the angle of the story and allowed the athlete’s management pre-publication approval of the photos and text. It made stories about swimmers’ personal lives easier to control.

Their public profile led to sponsorships, endorsements and post-swimming jobs as commentators. Their faces were on Weet-Bix boxes and Milo cans. Four members of the so-called Mean Machine, which won relay gold in the 1986 Edinburgh Games, even appeared in a beer commercial.

But the world has changed. The magazine industry has collapsed. There are more media outlets in Australia, competing more vigorously for juicy detail. Social media has come with both risk and reward. Athletes no longer need traditional media, and can broadcast their own narrative. But they don’t have as much oversight, either. An impetuous post, or a critical backlash, can be emotionally and reputationally damaging. 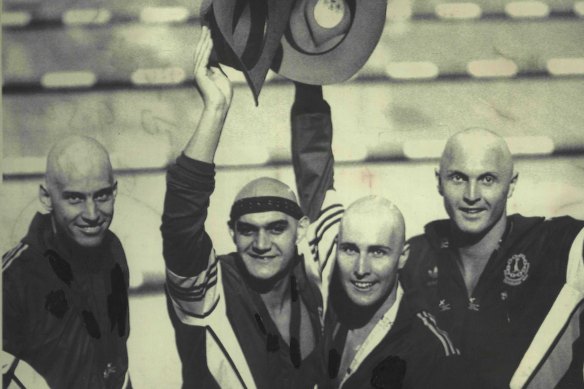 Australia’s “Mean Machine” pose with their gold medals after they won the final of the mens 4×100 freestyle relay. Credit:Kenneth Stevens

When they most need to focus, at competition time, they face the most distractions. That’s the challenge the Dolphins faced in Birmingham, after reports that Chalmers failed to congratulate McKeon after an early relay race and the love triangle headlines took on a life of their own. In a press conference, he was questioned about bad blood. He angrily denied it. The 24-year-old then followed up on social media. “I am your poster boy from 2016 and I’m your villain in 2022,” he said. “Do you know what it does to the humans you write about? It breaks them down little by little, and tonight is the breaking point.”

Grant Hackett, who won gold in Beijing, has had his own media dramas, described the headlines as rubbish. “They might be great swimmers, they might seem to be invincible … but at the end of the day they’re human. This stuff mounts on you,” he said. “All three of them from my understanding have had enough … when the adrenalin is going, the team’s around you, you’ll push yourself through it, but at what cost?”

Some said Chalmers was pouring fuel on the story by talking about it. Another former swimmer, Libby Trickett, congratulated him for being able to articulate his feelings. But the young swimmer’s father was critical of Swimming Australia for allowing his son to be grilled at a press conference.

“They allowed the media to dictate the questions and keep going on about it,” he told Adelaide radio. “They’ve failed to look after their athletes … If it was in a workplace, and you kept getting asked the same question over and over again, it’s a form of bullying and harassment, and it’s not condoned, and it’s not accepted.” 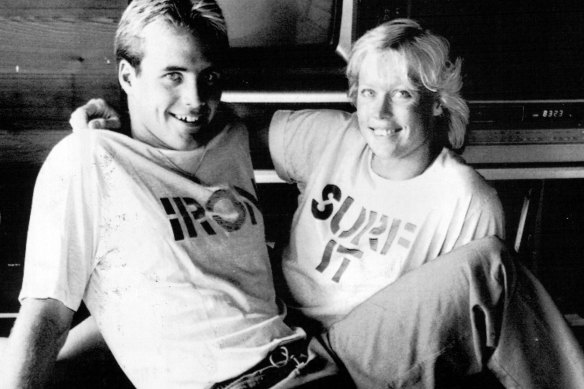 Australians have long been interested in the private lives of their swimmers: Lisa Curry and Grant Kenny announce their engagement in 1985.Credit:Fairfax Media

Each of the three athletes dealt with the controversy differently. Where Chalmers was vocal, McKeon was silent, although those close to her say she was deeply rattled. “I just focus on what I need to do. I’m here to race.” She let her swimming do the talking, and won an historic six gold medals. Simpson seemed to take it in his stride. “I think he has been lucky because he has had so much history with press and media before, performing on stage for thousands of people,” his mother Angie said in a television interview.

It’s easy to forget that most of the time, there’s nothing glamorous about swimming. It’s hours of training and minute focus on tumble turns and strokes and kicks, for which athletes sacrifice everything their peers enjoy, such as social lives and jobs that reward long hours with decent pay. It’s not surprising that swimmers date swimmers. It would be difficult for anyone else to understand the monastic relentlessness of their life choice.

Georgia Ridler is an elite sports psychologist who worked with Swimming Australia after its damning review of team culture at the London Games, and is now lead performance psychologist with the Australian Olympic Committee. That Chalmers and McKeon reacted differently to the situation they found themselves in is natural, she says; we are all different, and respond differently to stress.“Obviously there was enough of a need, a desire, to speak up [for Chalmers].”

Sports do try to prepare athletes for their two-yearly burst of scrutiny, but it is never easy to finish a race then quickly refocus in order to respond to questions from journalists, she says. “When you get the super tricky questions that have underhanded meaning, that’s tough for a young person post race,” she says. “Some of the media questioning may not be in alignment with supporting young fellow Australians. I think that’s fair to say.”

Sports are becoming more sophisticated in their approach to athletes’ wellbeing, she says. They are no longer judged – within their team, at least – for showing glimpses of their feelings. “[These games] have highlighted that athletes feel more comfortable to tell their story. We’ve seen more emotion and elation and expression in their responses, and I think that’s a positive thing. It’s okay to be human as an athlete, whereas I think in the past being human in a sense was shunned and athletes needed to present more robotically.”

Stockwell said post-race press conferences were part of the games. “Some people might say, ‘well you should be happy your sport is getting media’, but when you’re dealing with people and their mental health, it sometimes seems to be a bit unbalanced and inappropriate,” she says. “When we are at major competition we would like the focus to be on the performances.”

“At the same time, you’ve got to walk through the mixed zone, you have to go to press conferences, again they’re all learning to perform in that arena as well. There are expectations. How do we better prepare athletes to deal with difficult scenarios and questions? If we have to, we’ll do that more.”