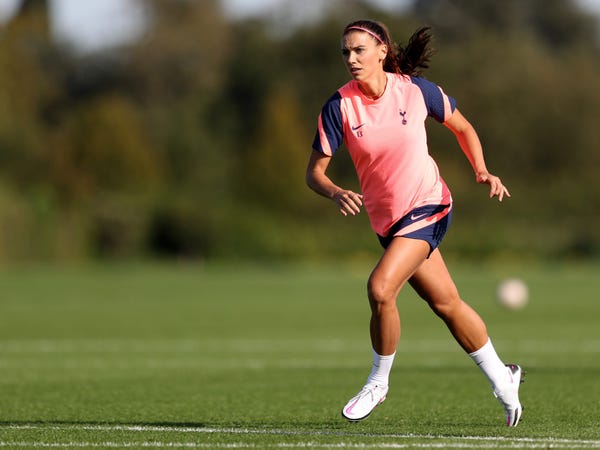 A lot has changed for Alex Morgan — a new mom with a new team in a new country.

The US Women's National Team superstar signed a one-year deal with Tottenham Hotspur less than six months after giving birth to her first child. Now she's adjusting to life in the UK with her daughter, Charlie, while preparing to return to competition for the first time in a year.

It's a lot to take on for anyone — even an Olympic gold medalist and two-time World Cup champion — but Morgan's love of the game trumps all.

"I want to play, you know? I want to play soccer," Morgan told Insider while promoting her Fun Comes First campaign with GoGo squeeZ. "This is what I love. It's my passion, and regardless of it being my job, it's what I love to do every single day."

That wouldn't have been so easy back in the United States. Since 2013, Morgan has played club soccer in the National Women's Soccer League, the top women's league in America that, before the pandemic, featured all of the active players on the USWNT roster.

Though her Orlando Pride have been active in recent weeks, they did not partake in the NWSL's Challenge Cup this summer due to a COVID-19 outbreak within their own ranks. The Pride will have played just four games in 2020 when their NWSL Fall Series schedule is all said and done this Saturday. Between the limited opportunities for competitive play and the outsized risk of contracting the virus while traveling to North Carolina and Texas, Morgan opted to try something new.

"I have to look at when the last time I played a competitive match was. A full match? That was the World Cup … it's been a year," Morgan said. "I need to get back to full fitness, and I need to get games … Not being able to do that in the US because of the season really wrapping up with the NWSL mid-October and not starting back up until a to-be-determined date next year, I knew that I needed more."

"An individual training environment just wasn't going to be enough for me to get my touch back, to get my speed back, to feel good about going in with the National Team," she added. "Whether that be in November or January, I wanted to be in a team environment consistently so I can feel good going into 2021 — which is hopefully when we'll be going to Tokyo."

The FA Women's Super League provided her with the best opportunity to do just that. The league — which includes several sister teams to Premier League clubs — has rapidly bridged the gap in skill level between itself and the women's leagues traditionally thought to be the best on the planet, including the NWSL and Australia's W-League. International superstars such as Australia's Sam Kerr, Denmark's Pernille Harder, England's Lucy Bronze, and Ellen White, France's Valerie Gauvin, and Holland's Vivianne Miedema have all recently joined the FA WSL's ranks.

Plus, some of Morgan's USWNT teammates have also taken the trip across the pond to compete for various sides in the UK's top league. Strikers Tobin Heath and Christen Press both joined Manchester United, while midfielders Rose Lavelle and Sam Mewis signed with crosstown rival Manchester City.

"I feel like the decision is made so quickly, so it took me like a week or two to settle down here, but I feel good about my decision that I made," Morgan said. "It's pretty exciting just seeing so many international players play here as well as so much top talent domestically."

Though Morgan has yet to debut across the pond, her Hotspur squad has already played six matches this fall and has another eight on its schedule before the end of the year. She acknowledged that Tottenham might not have been the most obvious landing spot for a three-time FIFPro World11 star like herself. Morgan said she sees joining a team that "isn't really seen as one of the top two or three powerhouses in the WSL" gives her a unique opportunity to make an immediate impact for the club.

"It gives me a challenge to really step in and get back to where I was before at an accelerated rate," Morgan said. "And also to bring my playing leadership and experience as well to try to help my team to more success."

But until she's match fit, Morgan will continue getting her lay of the land in North London. Though her husband, Servando Carrasco, didn't make the initial trip to the UK with her, Morgan said she's looking forward to his arrival at the end of the month.

As for Charlie, Morgan says the now-five-month-old has been remarkably adaptable to her new surroundings, which has undoubtedly made it easier for the 31-year-old to make the most of her time on the pitch.

"She's a total rock star and has been sleeping well, which gives me a lot of rest and helps me feel good for training and getting back in with the team," Morgan said. "We've also been doing a lot of day trips to parks and into the city. It's been fun to explore."

Morgan could make her Tottenham debut as early as next week, as Hotspur take on a league-leading Arsenal squad on Sunday. If not, Tottenham's November 4 matchup with Chelsea will more than likely feature Morgan's first live action of the year.