PEBBLE BEACH, Calif. — It is the shortest hole that most of the world’s best golfers ever play. At barely 100 downhill yards from tee to green, it consumes just one-seventieth of the overall length of Pebble Beach Golf Links.

Yet the cliffside seventh hole is where the best players pause to look around and, these days, take a selfie overlooking the ocean. It is also the place that might require a smooth wedge one day and a hard-punched 5-iron the next.

It is a beautiful and wicked par 3, with a habit of interjecting itself into United States Open lore.

“Think you can throw it on the green?” Jon Rahm, the 24-year-old Spaniard, asked his caddie during a practice round on an uncommonly warm and still Tuesday. The sign nearby said the hole was 109 yards away.

“No,” the caddie replied.

“From the front of the tee box?” Rahm asked.

Rahm later called the seventh “easily” one of the three best par 3s in the world. When Justin Rose was asked which holes stood out at Pebble Beach — a course jammed with iconic holes — his mind went to the seventh.

“It’s great to play a par 3 that’s not 200 yards,” he said. “And as soon as the green gets firm, it’s like the 17th at Sawgrass. As soon as the conditions get a little bit rough, everything changes. It’s right there on the peninsula and on the rocks, and you get a 10-, 15-mile-per-hour breeze, that green is pretty small. It’s an elevated tee, so the wind has more effect. It’s a fun hole.” 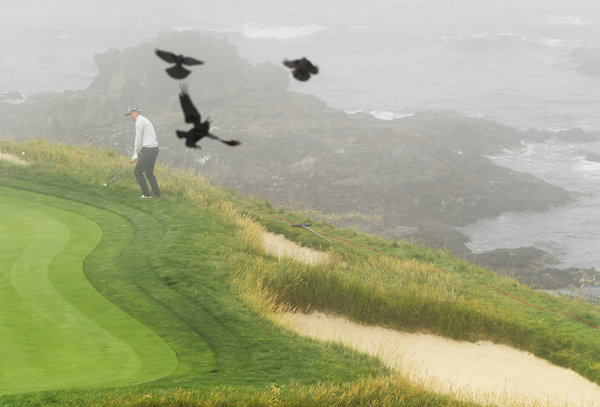 “Fun” is not always the preferred adjective. Sam Snead once used his putter off the tee at the seventh just to avoid the wind. A club pro during the Bing Crosby event, now the AT&T Pebble Beach Pro-Am, once made a hole in one on the seventh with a 3-iron.

The most famous shot at No. 7 was during the final round of the 1992 U.S. Open. The wind was treacherous that June day. Only two of the final 20 golfers hit the seventh green.

Tom Kite, in the last group, hit a 6-iron off the tee and sent it into the deep grass to the left.

In the clubhouse, Jack Nicklaus congratulated Colin Montgomerie on winning, even though he was trailing and the tournament was hours from concluding. Montgomerie had shot a 70 that would leapfrog 20 competitors. The feeling was that Kite would soon fall behind, too.

“Just as Jack said it, Kite chipped in,” Montgomerie said that evening.

Kite led by one and held on to win. Montgomerie was third. Between them was Jeff Sluman.

“You almost don’t want to hit the shot up there,” Sluman said of No. 7. “But you can’t just walk over to the eighth tee.”

Pebble Beach starts inland, among trees and homes and condos. It is not until the fourth hole that the course kisses the coast and the briny smell of the sea wafts in the heavy air. The sixth is a par 5 straight down one side of a peninsula that juts into the ocean; from the fairway, the sixth green feels like the end of the earth.

But there is more hiding behind it: the tee box to No. 7.

“The first six holes are something of a come-on, you could say,” Herbert Warren Wind wrote for The New Yorker from the 1972 U.S. Open, the first played at Pebble Beach. “There’s nothing especially hard about them. Then watch out. From there on in, you’ve got to play absolutely first-class shots or you can go for a bundle.”

The seventh tee backs to a cliff, guarded only by a weathered, lichen-stained split-rail fence. On Tuesday, a television technician stringing wires leaned against one section, and the top rail popped out of its holdings. He fell into the few feet of sloping weeds atop the precipice.

“I didn’t even realize how close I was to going over,” he said.

The rocky reefs below are made for shipwrecks and seals. During Tuesday’s practice round, most golfers paused to take photographs after teeing off. They visit some of the prettiest places in the world each week. But the seventh at Pebble Beach is where they take pictures.

Adding to the serenity is the lack of fans. They are not permitted close to the tee or the green. Most are corralled into a grandstand along the left side, overlooking the green and the ocean beyond — maybe the best view from a set of bleachers anywhere.

Behind the little green, staked at the cliff’s edge, is a microphone capturing the sound of waves crashing below for television audiences. A harbor seal sunbathed on the rocks on Tuesday.

During practice rounds, caddies sometimes take swings at the seventh. One foursome on Tuesday agreed to a closest-to-the-pin contest, each tossing in $5 — or $100, if someone got a hole in one. None of them hit the green.

A short time later, Julian Etulain of Argentina hit a 56-degree lob wedge. The ball landed soft and skipped into the hole.

Jack Nicklaus won the 1972 U.S. Open, the first played at Pebble Beach. The shot that is recalled most is his 1-iron at the par-3 17th, about twice the length of the seventh, that hit the pin. Nicklaus won by three strokes. In chronicling the tournament for The New Yorker, Wind said it was not the most important shot of the day.

It was the birdie at No. 7 that set Nicklaus straight after a rocky start. On the tee, he bent and pinched grass from the ground and tossed the blades into the 30-knot gusts.

“And when they were whipped back into his face, he laughed nervously,” Wind wrote.

Nicklaus, then 32, punched a 7-iron low and left, 25 feet from the hole, which is about as far as the tiny green allows. He drained the putt for a birdie.

The seventh was nearly erased from Pebble Beach shortly after the course opened 100 years ago. In 1920, the golf architect William Herbert Fowler said that the hole was beautiful, but not a test worthy of an otherwise fine championship course. He suggested getting rid of No. 7 and squeezing a short par 3 in somewhere else.

Fortunately, no one acted on his recommendation. (Thankfully, they did act on his idea of stretching the 18th hole from a short par 4 to a long, seaside par 5, creating one of golf’s great finishing holes.)

On Tuesday, Tony Finau came to No. 7 and casually lobbed a wedge onto the green. It was much different than a rainy, windy round in February 2017 when Finau was so proud of his 5-iron to the green that he posted the video on Instagram.

Marc Leishman, Finau’s playing partner this time, similarly eased a high floater onto the green. As he began the short downhill walk, he stopped and turned to his caddie.

“You want a picture?” Leishman said. “Right here, in front of the tee?”