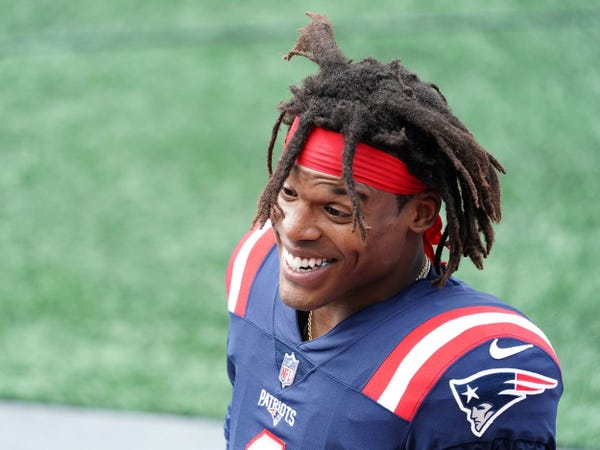 The most jarring aspect of the first Sunday of the 2020 NFL season may have been how normal it felt.

After an off-season unlike any other, with a pandemic forcing teams to draft from home, study playbooks over Zoom, and forgo the preseason entirely, Sunday mostly felt like the start of any other season.

The football was good. There was late-game drama, hotly debated calls from referees, and players making highly anticipated debuts with their new teams. While fans weren't in attendance across most of the league, those watching at home got so much action, it was impossible to keep track of every storyline.

Here the big moments you might have missed from the first weekend of the NFL season.

Week 1 was full of new beginnings at the quarterback position, as several QBs debuted with new teams. They all made an impact.

Tom Brady's first touchdown as a Tampa Bay Buccaneer came on his most unstoppable play: the quarterback sneak.

Brady threw for 239 yards, two touchdowns, and two interceptions. While it wasn't enough to stop the New Orleans Saints, Brady still looked like he had plenty of game left at 43.

Cam Newton, Joe Burrow, and Philip Rivers all had notable starts as well — though some better than others

Taking over for Brady in New England was former Panthers quarterback Cam Newton, who also scored his first touchdown on a designed run play. Newton then celebrated in the end zone with a "Wakanda forever" salute in tribute to Chadwick Boseman, who died last month at 43.

Newton went on to score another touchdown on the ground for the Patriots, then finished the game with 15 rushes for 75 yards and two scores. He made 15 completions on 19 attempts, throwing 155 yards through the air, as New England beat Miami 21-11.

Patriots offensive coordinator Josh McDaniels seems ready to utilize the entirety of his new quarterback's  skillset, and it should result in a New England offense unlike any we've seen in recent years.

Rookie quarterback Joe Burrow, meanwhile, wasn't able to secure Cincinnati the win, but he gave Bengals fans plenty of reason for hope. Burrow looked calm, cool, and collected in his first-ever NFL game, despite being hounded by one of the most dangerous pass-rushing duos in the league: Melvin Ingram and Joey Bosa of the Los Angeles Chargers.

Burrow got his first touchdown as a pro on a designed run, scampering through the middle of the field for a 23-yard score to get the Bengals out to a 7-0 lead early.

Then late in the fourth, Burrow engineered an impressive 80-yard drive down the field to set up what should have been the game-tying field goal in the final seconds. But just as fans were preparing to watch Burrow triumph in overtime, Bengals kicker Randy Bullock shanked a 31-yard chip shot, and the game was over.

Finally, veteran quarterback Philip Rivers' first game as an Indianapolis Colt was disappointing. The team lost to the lowly Jaguars in the most shocking upset of Week 1. Rivers became infamous during his last few seasons as a Charger for his knack for throwing untimely interceptions late in close games. Despite his new jersey, Rivers kept the trend going in Week 1 of the 2020 season.

Rivers' late-game interception was a clear sign that football is back.

The biggest moment of the season's opening Sunday came before the games kicked off. Just before 11 a.m. ET, NFL Network's Ian Rapoport reported that all players and coaches had passed their most recent round of COVID-19 tests, which were administered Saturday morning.

The NFL still has plenty of work ahead in navigating the season through a pandemic, but a smooth start was important for the league, since Week 1 was the first time teams traveled to play football.

As sports fans saw with Major League Baseball, one positive COVID-19 case can quickly lead the virus to spread through a locker room and even take a team off the field for days.

Baseball's schedules can be massaged if necessary with the help of double-headers and eliminated off-days. But making up games lost to COVID-19 in the NFL would be much more difficult.

The Bengals, Lions, and Cowboys faced a trio of heartbreakers

Sunday brought some solid, dramatic football. Burrow's heartbreaker with Cincinnati was only the second-most painful defeat of the day, since the Detroit Lions blew a 23-6 fourth-quarter lead against the Chicago Bears.

After looking lost for three quarters, Mitch Trubisky found his rhythm in the fourth, throwing three touchdown passes to give the Bears an improbable 27-23 lead with just under two minutes to go.

In response, Lions quarterback Matthew Stafford navigated his team into the red zone with seconds remaining. For a moment, it seemed he'd thrown a game-winning touchdown pass to rookie running back D'Andre Swift.

But Swift dropped it.

It's tough to pin a game's outcome on one play or one player, but man, would Swift like to have another shot at that one.

After the game, Lions head coach Matt Patricia comforted his new running back.

"I put my arm around him as soon as we got to the tunnel, walked up the tunnel with him and told him he's a great player," Patricia said after the game, per ESPN. "The game's not on him. It's on me."

The referees made a bit of noise

What would a week of NFL action be without controversy over the rules?

The final minutes of Sunday Night Football were settled thanks in part to a hotly debated penalty.

With the Rams leading 20-17 in the fourth, the Cowboys needed to drive for at least a field goal to force overtime. For a moment, it appeared they'd done it, as Dak Prescott connected with Michael Gallup down the sidelines for 47 yards. But the yellow flag was thrown.

Gallup had extended his elbow while looking for separation from cornerback Jalen Ramsey, and the play would be called back. Watching the replay, you can see what the referees were going for, but it felt like a soft call.

The other highlight from the refs on Sunday came in the the form of the first ejection of the season.

In the second quarter of the Lions' opener against the Chicago Bears, Detroit linebacker Jamie Collins became frustrated with Bears running back David Montgomery for lowering his head on his runs. So after a play, Collins lowered his head and lightly put it into the chest of a referee, as if to demonstrate how Montgomery was running.

You can't do that.

But even with those ref-centric moments, overall the zebras and the players had a pretty good weekend with regard to penalties. False starts were way down, and it didn't feel like any officials became the main characters of the game they were calling.

Teams took varying approaches to protests during the national anthem

Heading into the season, it was clear that players and teams would handle the national anthem differently across the league.

On Thursday night, the Chiefs were on the field for the anthem, while the Houston Texans remained in their locker room. When the two teams met on the field for a moment of silence dedicated to "the ongoing fight for equality," they met boos from the crowd.

On Sunday, there was a similar split. The Miami Dolphins had announced ahead of time that they'd stay in the locker room as the anthem played, and the Green Bay Packers, Philadelphia Eagles, Jacksonville Jaguars, Buffalo Bills, and New York Jets made the same choice. Of the teams that took the field, players knelt, raised a fist, or stood.

The most effective onfield display of solidarity came from the Seahawks and Falcons, who both took a knee together after the opening kickoff, in a move similar to that seen around the Premier League over the summer.

Washington, Arizona, and the best of the rest of the Sunday slate

Washington's first game as the "Football Team" was a success for a franchise looking to turn the page. After spotting the Philadelphia Eagles a 17-0 lead to start the game, Washington closed with 27 unanswered points thanks to an impressive defensive performance that generated eight sacks from seven different players.

Rookie defensive end Chase Young looks to be as good as advertised.

The Arizona Cardinals, meanwhile, wowed with an upset win over the San Francisco 49ers. Second-year quarterback Kyler Murray made the most of his newest offensive weapon, wide receiver DeAndre Hopkins, connecting for 14 receptions and 151 yards.

In Minnesota, the Green Bay Packers'  Aaron Rodgers had a spite game for the ages, putting up 43 points against the Vikings. Who says he needs more weapons?

Despite all the changes, some things remained the same

The Ravens are still good, which was bad news for the Browns.

And the Jets are still bad, which was good news for the Bills.

But Week 1 isn't over yet

In Monday night's double-header, the Steelers take on the Giants and the Titans travel to Denver to face off against the Broncos.

Between Big Ben's first game in a year, Joe Judge's first game as head coach of the Giants, and Tennessee's first chance to prove that their AFC title game appearance last year wasn't a fluke, there's still plenty more NFL action to go before Week 1 comes to a close.