PARIS — This is a story about North Korea, a dubious lightning strike, the curative wonders of deer musk glands and how Thailand became a women’s soccer power.

It also is the story of the insurance magnate who is the general manager and benefactor of the Thai team. And the American-born Thai forward who will face one of her childhood heroes on Tuesday when Thailand plays the United States in their opening match of the Women’s World Cup in Reims, France.

“I don’t think the Thais consider themselves an Asian power,” said Thailand forward Miranda Nild, 22, who grew up in the Bay Area and attended Cal-Berkeley, as did the American star Alex Morgan, whom Nild idolized as a younger player. “The rumor was we made it because North Korea couldn’t make it.”

It is more than rumor. At the 2011 Women’s World Cup, five North Korean players tested positive for steroids and the team was banned from the 2015 tournament. Now, plenty of people deny using prohibited substances. Many produce extravagant alibis for how illicit drugs entered their bodies: Their toothpaste was spiked. They kissed their girlfriend too passionately. They absorbed a twin in utero.

North Korea, though, trotted out a particularly ornate explanation. Many of its players had been struck by lightning, team officials said. To recover, the players took traditional medicine made from the glands of musk deer. Or so it was said. Even FIFA, which has been known to put up elaborate smoke screens of its own, especially when it comes to bribery scandals, did not buy that excuse.

With North Korea suspended and the 2015 World Cup field expanded from 16 to 24 teams, including five from Asia, Thailand slipped into the spot many expected to go to the North Koreans and made its inaugural appearance in the tournament. Then it missed out on the knockout rounds only by the tiebreaker of goal differential.

Because North Korea was not seeded in qualifying for the 2019 World Cup, it faced an early showdown against South Korea, lost the match and found itself ineligible for a second time to compete in soccer’s global championship. Again, Thailand benefited. 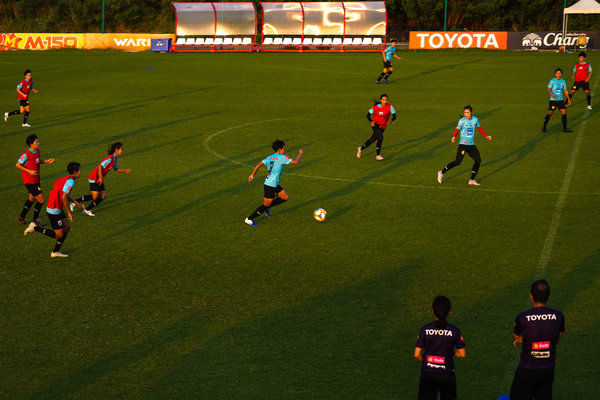 “That’s not to say they haven’t worked hard and earned a spot,” Moya Dodd, a prominent soccer official from Australia and a former member of FIFA’s executive committee, said of Thailand in an email. Yet Thailand has capitalized on North Korea’s troubles, she added.

While North Korea is only an accidental benefactor of Thailand, a more deliberate patron is the general manager of the Thai women’s national team, Nualphan Lamsam, 53, known to many as Madam Pang. She also happens to be the chief executive of one of Thailand’s largest insurance companies and the chairwoman of a team in the Thai men’s league. Her family’s company also is a sponsor of Thailand’s nascent women’s league.

Players on the women’s national team also are employed by Lamsam’s company, Muang Thai Insurance, a team spokesman said. If there is a long period without training or matches, the players work as sales representatives for the company, the spokesman said. During the season, a regular paycheck from the insurance company allows players to concentrate on soccer without having to find other jobs.

And during World Cup qualifying, Lamsam even doubled the bonuses paid to the players, Nild said, calling the financial assistance “super sweet and nice for the girls.”

Of course, Thailand is still expected to play at an extreme disadvantage against the United States on Tuesday. The teams have met only once, in 2016, and the Americans prevailed, 9-0. Nild, 22, whose given name — the one used on Thailand’s roster — is Suchawadee Nildhamrong, and whose father is Thai, said she noticed several cultural differences between women’s soccer in the United States and in Thailand.

At 5 feet 7 inches, Nild brings height and physical strength to a team whose players are generally small, quick and deft moving in tight spaces. Nild is the second-tallest player on Thailand’s team, and is the type to win headers and to be strong enough not to get knocked off the ball by defenders.

While the Americans possess what she calls a “go-getter mentality,” she said, the emerging Thai team lacks self-confidence, and it can seem intimidated against the best teams in Asia and elsewhere.

“The girls are trying to address it, but there’s a pretty big insecurity,” Nild said.

She said that the Thai coaches are “a little soft on us,” perhaps because they feel that “women are too delicate.”

“They are always really afraid to hurt our feelings,” Nild said. “When they critique us, it’s always sandwiched between compliments. Everyone really treads lightly around women players. That’s super different from what I’m used to. My college coach was always direct — ‘This is what you’re not doing well and you need to fix it.’ In Thailand they shy away from what you are not doing well and focus on other things, which I think is probably our biggest loss.”

On the other hand, Thailand is a progressive soccer nation when compared to others in Southeast Asia. A woman is general manager of its women’s national team. And a woman is coach, Nuengruethai Sathongwien, a rarity in that region. Maybe even more rare than players getting struck by lightning and cured by deer musk glands.

Jeré Longman is a sports reporter and a best-selling author. He covers a variety of international sports, primarily Olympic ones. He has worked at The Philadelphia Inquirer, The Dallas Times Herald and The Clarion-Ledger in Jackson, Miss.