Neymar, the soccer star who is one of the world’s best-paid and well-known athletes, has been accused of rape by a woman in São Paulo, Brazil. The woman filed a complaint with the Brazilian police over the incident, which she said happened in a Paris hotel room.

The details of the accusation are contained in a police report seen by The New York Times and first reported by news media outlets in Neymar’s native Brazil.

In comments to the Brazilian television channel Band, Neymar’s father, Neymar Santos Sr., strongly denied the rape allegation, contending that his son had engaged in consensual sex with the woman.

“This is a tough moment,” Neymar Santos said. “If we can’t show the truth quickly it will be a snowball. If we have to show Neymar’s WhatsApp messages and the conversations with this lady, we will.”

A spokesman for Neymar’s French club side, Paris St.-Germain, said the team was not aware of the allegations.

The accusation comes as Neymar prepares to lead Brazil’s national team at the Copa América, South America’s most important national team tournament, later this month. Neymar was replaced as Brazil’s captain in recent days after a difficult club season in which he was banned and fined for an altercation with a rival fan.

According to the police report, the woman said Neymar paid for her to fly from Brazil to Paris, then attacked her in a hotel in Paris on the evening of May 15.

The police report states that the woman, who was not identified by name, said she exchanged messages with Neymar on the social media platform Instagram before accepting an invitation to travel to Paris, where she met with him in a suite at Sofitel Paris Arc de Triomphe in May. According to the report, the two spoke and “exchanged caresses” before, the woman said, Neymar “turned aggressive” and forced her to have sex against her will.

The woman stayed in Paris before returning to Brazil two days later. She filed the complaint in São Paulo, where she lives, according to the police report. She did not register the accusation in France, the woman said, because she was too emotionally shaken to do so in a foreign country. 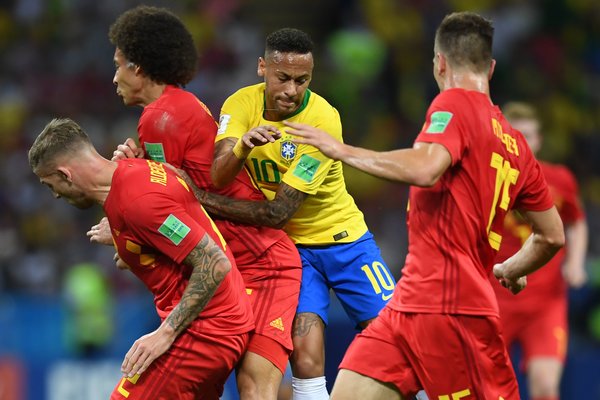 São Paulo’s civil police confirmed in a statement that a case had been filed but did not elaborate. A spokesman for the Paris prosecutor’s office said that he was not aware of any complaint or investigation in that city.

The case will be followed intensely in Brazil, where Neymar burst to nationwide acclaim as a teenager with the club Santos, the club where the Brazilian legend Pelé made his name. Neymar’s stunning early performances as a teenager turned him into an instant millionaire, with sponsors clambering to sign him to their brands.

He was the figurehead of Brazil’s World Cup team in 2014, the year before he joined Spanish club Barcelona. Neymar played four seasons in Spain before his blockbuster sale to P.S.G. for a world-record fee of almost $250 million.

The French team, backed by the seemingly bottomless funds of its Gulf owners, paid a transfer fee that was more than double the previous record. Recent media reports have linked Neymar with a return to Spain, however, either with his former team Barcelona or its bitter (and similarly deep-pocketed) league rival Real Madrid.

The first news reports of the rape accusations against Neymar emerged on Saturday in the middle of the Champions League final, the biggest club game in global soccer.

For all his success, Neymar has also proved to be a lightning rod. At the 2018 World Cup in Russia last summer, he was ridiculed widely for regularly flopping and rolling on the turf after seemingly innocuous contact from his opponents.

Neymar also has expressed frustration at persistent criticism of his party-loving lifestyle and general behavior. Earlier this year, he was photographed at Rio’s Carnival while on crutches as he recovered from an injury that had kept him out of crucial games, including P.S.G.’s Champions League elimination by Manchester United.

Neymar responded to that defeat by insulting match officials on social media. That led to a three-game suspension by European soccer’s governing body, UEFA, that he will serve at the start of next season’s Champions League.

Neymar is not the only major soccer player facing a rape inquiry. Cristiano Ronaldo, who has for much of the past decade vied with Lionel Messi to be acclaimed as the sport’s best player, is being investigated by authorities in Las Vegas.

Last year, the police reopened an investigation into an American woman’s 2009 rape accusation against Ronaldo after the German news weekly Der Spiegel published details of the case obtained through a leak of emails belonging to Ronaldo’s attorneys. Ronaldo has denied the accusation.