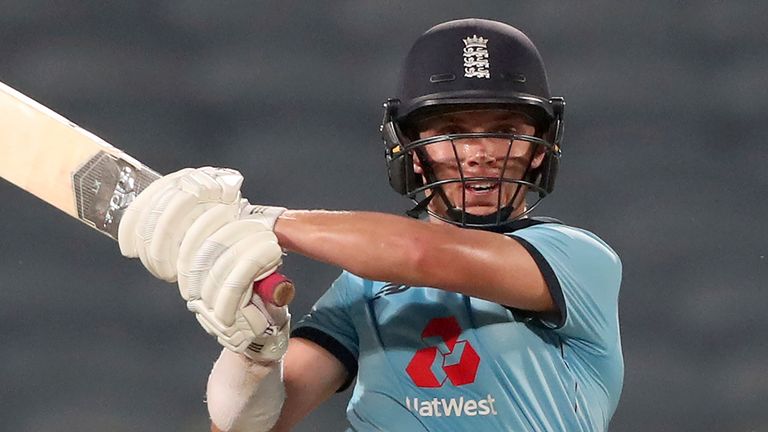 A magnificent unbeaten 95 from Sam Curran came in vain as India secured a clean sweep of series wins over England with a dramatic seven-run victory in the crucial third one-day international.

With England faltering in their chase of 330, the all-rounder made the most of being dropped on 22 and thumped nine fours and three sixes in his 83-ball knock but, left needing two sixes from the last two balls, he came up just short.

Quickfire half-centuries from Rishabh Pant (78 from 72 balls), Shikhar Dhawan (67 from 56) and Hardik Pandya (64 from 44) had helped India to post 329 in Pune, despite a lower-order collapse seeing them bowled out in 48.2 overs.

The game looked up when Moeen Ali (29) departed to leave England 200-7 but Curran shared stands of 57 and 60 with Adil Rashid and Mark Wood, respectively, to keep England in contention right until the end with a superb first ODI half-century. 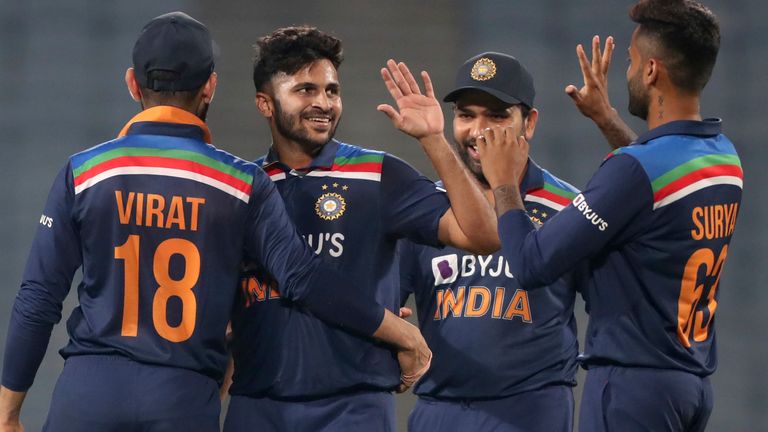 The all-rounder took it down to 23 from the last three overs but after two dropped catches and a run out in a thrilling finale, England finished on 325-9, leaving India to celebrate an ODI series success to go with their triumphs in the Tests and T20s.

Having been put in again, India took a different approach with the bat. Gone was the gradual build towards an explosive crescendo in the last 10 overs, replaced by a tactic more in line with England’s: go hard and go early.

Dhawan, in particular, embraced that during the powerplay, getting after anything loose and peppering the boundaries, as he raced to a 44-ball half-century.

The opening stand had reached 103 before Adil Rashid (2-81) broke it with a superb googly that turned to beat Rohit Sharma (37) through the gate and hit off stump.

The legspinner struck again in his next over, another googly drawing a leading edge from Dhawan and the bowler held on to the return catch. England’s fightback, led by their spinners, continued when Ali (1-39) ended a 340-ball wicketless run in ODI cricket by claiming the prize scalp of Virat Kohli (7), the India skipper bowled as he played back to a delivery that turned sharply to hit the top of leg stump.

Pant and KL Rahul (7) steadied things briefly before the latter handed Livingstone (1-20) a wicket with his second ball in ODI cricket; the part-time spinner sending down a leg-stump full toss that was hit to short fine leg where Ali clung on to a good catch.

Losing four wickets in less than 10 overs did not deter India, though, and Pant and Hardik were soon driving the hosts forward, three sixes off an Ali over the clearest example of their big-hitting potential and positive intent.

The partnership quickly reached 99 and a score of 400 was well within India’s reach before Curran (1-43) dismissed Pant, thanks to a fabulous reaction catch, one-handed behind the stumps from Jos Buttler after he had initially been wrong-footed.

Hardik eased to a 36-ball fifty soon after, only to be bowled behind his legs by Ben Stokes (1-45) at the end of the 39th over, just as India would have been gearing up for another onslaught. 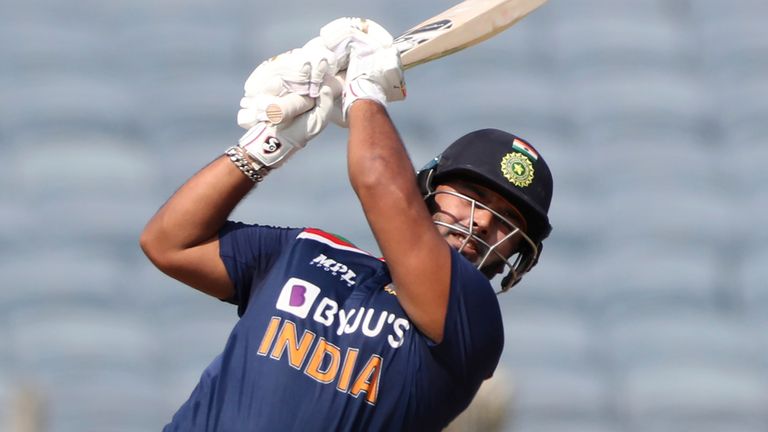 Krunal Pandya and Thakur (30 off 21) added a useful 45 but when Wood, who had been on and off the field and looked visibly unwell, had the latter caught behind, the innings subsided quickly – the last four wickets going down for just eight runs – as India were unable to marry the fast start with their usual barnstorming finish.

England looked set to get off to another flyer in the chase as Roy hit three boundaries from the first five balls, only to be bowled by the sixth, a beautiful in-swinger from Bhuvneshwar getting through his defence and hitting the top of off.

Bhuvneshwar removed the in-form Bairstow (1) lbw in his next over and having accounted for England’s much-vaunted opening pair early, it should have been three in three overs for India’s star seamer; Stokes, on 15, skying the ball as he tried to hit over the top but Hardik dropped a relatively simple chance as he came round from mid-off. Fortunately for Hardik, it did not prove too costly as Stokes departed for 35, hitting a waist-high full toss from T Natarajan down the throat of Dhawan at deep square leg.

Stand-in captain Buttler’s disappointing one-day series was completed when Thakur trapped him lbw, India reviewing to overturn the original ‘not out’ decision and leave England 95-4.

It was left to Malan and Livingstone, both relative novices in ODI cricket, to get the innings back on track and they did so impressively; Malan elegantly kept the score ticking over while Livingstone went boundary hunting.

However, after adding 60 in 8.4 overs, the pair fell in successive Thakur overs. Livingstone toe-ended a full toss back to the bowler before Malan, having pulled through midwicket to bring up his maiden ODI fifty, tried to repeat the shot and picked out Rohit inside the circle. Ali kept England’s faint hopes alive with some typically stylish stroke-play, only to fall for 29 when Bhuvneshwar came back into the attack in the 31st over.

England were not done though with Curran and Rashid keeping them up with the required rate but when Kohli took a stunning one-handed catch in the covers to get rid of Rashid (19) and give Thakur his fourth wicket, it looked like it was game over.

Curran, having been given a life when Hardik dropped a regulation catch in the deep, reached his half-century from 45 balls and cleared the ropes with a couple of lusty blows, but with just the tail for company, he faced an uphill task.

The game seemed to be getting away from England before Thakur came back for his final over and Curran thumped two fours and a huge six over long-on to bring the visitors right back into contention, needing 23 from 18 balls.

Bhuvneshwar bowled a superb 48th over, conceding just four, while it took the tightest of DRS reviews to deny him the wicket of Wood after the England No 10 had been given out lbw on the field.

The drama ramped up again in the 49th from Hardik with a misfield followed by two drops in as many balls, Thakur shelling a sitter to give Wood a reprieve before Natarajan grassed a slightly tougher opportunity next ball that not only kept Curran in, but also allowed him to keep strike.

Natarajan was tasked with defending 14 in the final over with England, Curran slapped the first ball towards long-on but slipped as he turned for the second; that meant Wood had to turn back and a bullet throw from Hardik left him short of his ground when Pant took the bails.

Topley got Curran back on strike to make it 12 needed from four balls, Natarajan nailed his yorker with the next but Curran’s chance came from the fourth, a low full toss that the left-hander could only hit to long-off.

A four from the penultimate ball meant England needed extras to win and Natarajan held his nerve to finish the job for India.