Russell Wilson may lead the N.F.L. in touchdowns and Dak Prescott in passing yards, but Josh Allen leads the league by a wide margin in cognitive dissonance.

A short list of Most Valuable Player Award contenders has separated itself from the pack as the N.F.L. season rounds its first turn. Allen, with 1,326 passing yards and 15 combined passing and rushing touchdowns for the 4-0 Buffalo Bills, is the dark horse galloping up the rail.

Allen was a polarizing prospect when the Bills selected him seventh over all in the 2018 draft. Height and arm strength are aphrodisiacs known to make the N.F.L. scouting establishment pant like cartoon wolves, and Allen is 6-foot-5 and can throw a football across a ZIP code. But internet draft hipsters insisted that Allen would fail because he was about as accurate and reliable as a medieval trebuchet careening down a steep hill, and Allen lived down to their expectations early in his career.

His accuracy and decision making have steadily improved over three seasons with the help of stable coaching and upgrades to his supporting cast. That’s how football wisdom dictates young quarterbacks are supposed to develop, but it rarely happens as planned, because football wisdom is passed down by coaches like Adam Gase. At any rate, Allen’s emergence has forced the analytics and indie scouting communities to modify past judgments, justify evaluation methods and seek other alternatives to just admitting we were wrong.

Allen may be gaining ground, but Wilson is currently the handicappers’ favorite with +175 odds to win the M.V.P. award. The Seattle Seahawks are 4-0, and Wilson has completed 75.2 percent of his passes for 16 touchdowns and just 2 interceptions so far this season.

Wilson has never received a single M.V.P. vote, much less won the award, despite two Super Bowl appearances and six Pro Bowl selections over his nine-year career. He was held back in past seasons by play calling that a 1970s high school coach would find conservative, and by the Seahawks’ habit of populating Wilson’s offensive line with converted defenders, power forwards and reanimated cadavers.

Wilson now has better protection and a playbook that wasn’t mimeographed by Weeb Ewbank, allowing him to be effective for full-game stretches instead of materializing like a deus ex machina in the fourth quarter to rescue the Seahawks every week. 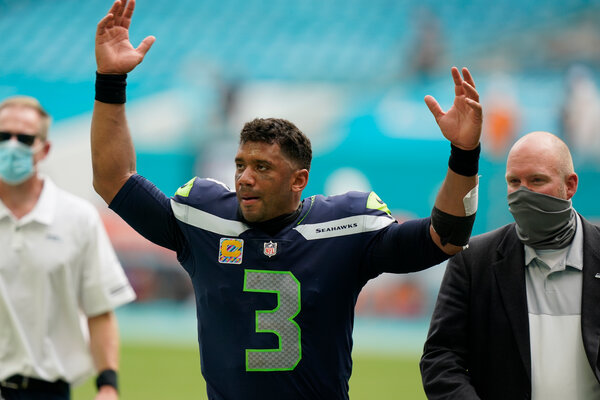 The reigning Super Bowl M.V.P., Mahomes remains in the thick of the race, but the football world is building up a tolerance for his brilliance, so fans need ever-increasing doses of highlights to fuel the rush. Humdrum performances like Mahomes’s 236-yard, two-touchdown effort in the Kansas City Chiefs’ Monday night victory over the New England Patriots may send voters elsewhere for their fix.

Rodgers has all the credentials of an M.V.P. candidate: His Green Bay Packers are 4-0, and he ranks second in the N.F.L. to Wilson in passing touchdowns (13) and efficiency rating (128.4). Rodgers’s prickly personality also makes him about as electable as Richard Nixon after the 1960 presidential debates. M.V.P. balloting is not supposed to be a popularity contest, but at a fundamental level it is totally a popularity contest.

Prescott is on pace to throw for 6,760 passing yards this season, shattering the N.F.L. record (Peyton Manning had 5,477 in 2013), but his Dallas Cowboys are 1-3 and perform each Sunday as if they just stumbled in from a weekend at a Barbecue, Bourbon and Buttermilk Festival. Prescott’s lonely battle against his team’s inadequacies will eventually earn him a lucrative long-term contract, either from the Cowboys or some more-deserving suitor. That’s a much better prize than any award.

Newton’s candidacy was derailed when he tested positive for the coronavirus last week, forcing him to miss the Monday night loss to the Chiefs. The fact that the Patriots offense was hapless in his absence could be framed as evidence of just how deserving of consideration Newton really is. By that talk-radio logic, we are all viable candidates by virtue of not playing for the Jets or Giants.

Brady climbed back into the M.V.P. race on Sunday with five touchdown passes in the Buccaneers’s 38-31 victory over the Los Angeles Chargers. A closer look at Brady’s portfolio reveals a weak schedule and a troubling habit of throwing pick-6 interceptions, but handing Brady a fourth career M.V.P. Award instead of recognizing someone younger and better qualified would be the ultimate 2020 shoulder shrug in the face of progress.

There are some non-quarterbacks well back in the M.V.P. chase, including Alvin Kamara, who leads the league in yards from scrimmage (557) and is the only force keeping Drew Brees from tumbling into a broadcast booth, and defenders like Cleveland Browns pass rusher Myles Garrett.

But only quarterbacks have won the award since Adrian Peterson in 2012, and no defender has won since Lawrence Taylor in 1986. The Offensive and Defensive Player of the Year awards typically recognize the accomplishments of players like Kamara and Garrett, though Brady won Offensive Player of the Year in 2007 and 2010, and who knows how voters will respond if he makes a gutsy tackle after an interception?

While Wilson and others may be stronger M.V.P. candidates, Allen is the best bet. His odds to win the award stood at +1,100 after Sunday and started the season at around +5,000. Any true believer who wagered on Allen early may soon be flush with both cash and enough “told you so” clout to be utterly insufferable on Twitter.

Odds from DraftKings are current through Tuesday.