Home » Sport » ‘Rather than checking out and getting cynical, I decided to do it’

It’s the oldest chestnut ever and always trotted out, oh so sagely, whenever the proposal is put to harness the power of sport to change the world.

“Sport and politics,” they say, with a pause that will have to pass for consideration, “shouldn’t mix.”

It was always the go-to defence objecting to sporting sanctions against South Africa in the Apartheid era, and it is the go-to defence now when the proposal is that all Russian sport and sportspeople should be told to stay home because the world doesn’t want anything to do with the destroyers of Ukraine.

It fools the dummies because they embrace the pithy concept without thinking on it for two seconds longer. Denying Black Africans voting power and base-level human rights, arresting and torturing dissidents, was not “politics” – it was an abomination. Invading Ukraine, murdering civilians and raping women kept prisoner is not politics – it is a war crime. But don’t get me started.

In any case, in the much more benign world of Australia, sport and politics demonstrably do mix, and most of our national leaders regard having a sporting interest so important they even frame it as part of their political appeal. (As a matter of interest, does anyone else in the country swing their scarf around their head the way the PM does when in the stands when Cronulla score a try? Not sure that I have seen it before, have you?) 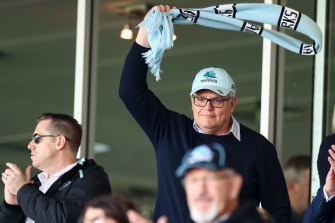 Scott Morrison at a Sharks game in 2020 at Netstrata Jubilee Stadium.Credit:NRL Photos

What, though, in this country, of people who have first made their name in sport before using the platform it gave them to have a go at politics?

Stand-out names include Sir Hubert Opperman, Ric Charlesworth, John Alexander, Dawn Fraser, Pat Farmer and Nova Peris. Of those, it was the Olympic cyclist, Sir Hubert, who was most successful, rising to the level of cabinet minister in the Menzies government.

And yet none of them get close to the one who was most admired for his honesty in his political foray.

That is one-time Kangaroos captain Mal Meninga, who a couple of decades ago thought he’d have a go at politics, running as an independent in Canberra. Yes, he was a little short on policy, not big on gravitas, but it was his complete lack of artifice that won everyone over.

“Why should people vote for you?” he was asked in his first radio interview.

And he walked out the door, never to return to politics, even as the people cheered. Give us anything but give us authenticity, give us honesty, give us frankness!

Mal delivered on all three fronts and his 10-second political career is fondly remembered because of it.

Asked what happened on Fox Sports many years later, Mal was, once again, nothing if not frank.

“I’d been doing all this preparation for six weeks prior about all these questions. All these questions you get asked there’s two or three answers you have prepared. So they asked me this question, ‘Why should people vote for [you]?’ And I hadn’t got this question in the whole six weeks of preparation. Jiminy Cricket’s on the shoulder and told me, ‘What the bloody hell am I doing this for?’ Bugger it.”

Two decades on, and another famous footballer from down Canberra way is also seeking to transition to a political career. Enter one-time Wallaby great David Pocock, who is running to be a senator for the ACT, also as an independent, and has already mounted a well-funded, well-resourced campaign with hundreds of volunteers.

Always the most political of footballers – he once stopped a Super Rugby game when a homophobic slur was uttered, and was later arrested for his part in a blockade against the expansion of the Maules Creek mine, while refusing to get officially married until marriage equality was legislated – I’m told Pocock is a reasonable chance of actually being elected. 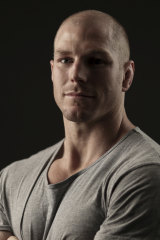 David Pocock will stand for the Senate at the May 21 election.Credit:Alex Ellinghausen

I spoke to him this week and asked the obvious question, first up. David, was Mal Meninga your political hero too, and most pertinently – we must get this out of the way – why should people vote for you?

(Stand by, sports fans. Let’s see if he crumbles.)

“I guess we all appreciated Mal’s honesty in that interview,” he replies with a laugh. “And, personally, like so many people I have been frustrated with politics. I feel like we’re not being well represented.

“Politicians aren’t actually connected to the people that they’re meant to represent, that they’re meant to be accountable to, and we’re seeing a real lack of integrity and trust and a lack of action on the big issues that actually matter to us. And so, rather than checking out and getting cynical, I was asked by a number of people to stand. I decided to do it.”

Was it the rugby that first formed you, and then informed your political views?

“I owe rugby a great deal, and was honoured to represent us on the world stage, but I also owe Australia a lot and want to repay the country that’s given myself and my family so many opportunities. While playing rugby, there were issues that I was interested and passionate about and felt like if I could contribute to some of those conversations long after my rugby career was over it would be a good thing.” 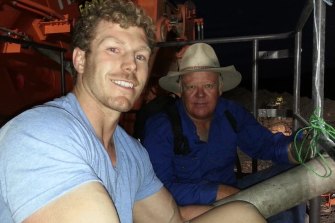 David Pocock pictured chained to a digger at Maules Creek coal mine.

“Among other things, I was trying to stop a fifth-generation farm from being mined. We should not be mining such a valuable resource. Beyond that, I think we can all see now that we have to actually transition to renewable energy. This is an economic opportunity we cannot afford to miss, and that’s another big part of why I’m running – it is a huge opportunity for Australia.”

You get the drift.

With the greatest respect to all, Mal Meninga he ain’t.

You will recall a decade ago, when it fell to independents Tony Windsor and Rob Oakeshott to decide who would form government, and they plumped for the ALP. As you are going for the Senate, not the House of Reps, that won’t be your call. But you could at least give us all an indication whether, if elected as an independent, you will likely lean to the Libs or ALP?

“(Light laugh). That’s the beauty of running for the Senate, is that yeah, you’re not forming government. But the power of the independents is that they can actually get real results. You look at Jacqui Lambie, she’s getting real results for Tasmania, as is Zali Steggall in Warringah.

“If I get elected, my role would be to work with whoever is in government, whoever the Australian people choose, to make sure that any policy that passes on my vote is actually in the best interest of the ACT and in the best interests of the country and …”

And you get the drift. I don’t know if Pocock will make it or not. But win, lose or draw, he is a bloke that sport can be very proud of having formed.