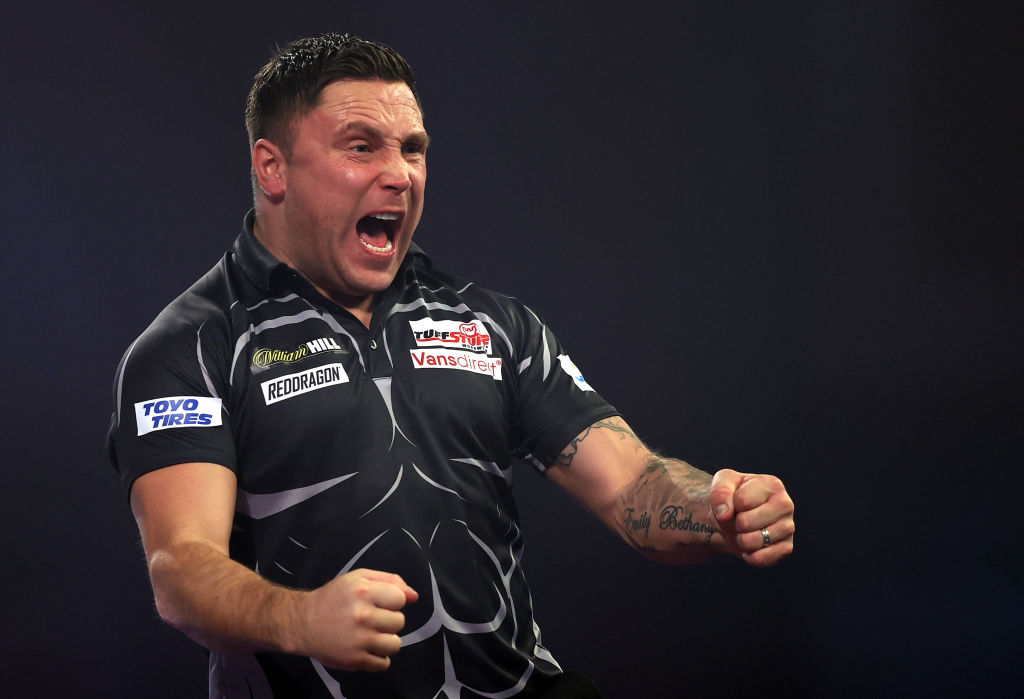 Gerwyn Price became just the seventh player to average over 100 in a World Grand Prix match on Sunday night, but the world number one still reckoned that his stats were ‘a little bit disappointing’ in his first round win.

The world champion beat Michael Smith 2-0 in Leicester, finishing with an average of 100.82 as he set up a second round clash with Mervyn King.

It was a thoroughly impressive performance from the Iceman, with 100 averages very difficult to come by in the unique double-in tournament.

However, having seen that he was averaging as high as 104 earlier in the match, Price was a bit frustrated that he couldn’t keep up that even better standard of play.

‘I thought that I played pretty well, especially the first set,’ the Welshman told Online Darts. ‘The problem was I looked over and seen that I was averaging 104 and I thought I had to keep it up, put a bit too much pressure on myself.

‘I know Michael slipped up in a couple of legs, I couldn’t start in one or two, but overall it was a good performance.

‘After dropping down from 104, it was a little bit disappointing, but I’m just glad to get a win.

‘Numbers are nice to look at after you’ve won but the W is more important than anything.’

Having won the Gibraltar and Hungarian Darts Trophies last month, Price is in fine form and came into the Grand Prix as both defending champion and favourite to claim the title again.

‘Obviously winning breeds confidence and I’m full of it,’ he said. ‘I know this tournament is a little bit different, double start, it can get to you a little bit mentally.

‘I seem to concentrate a bit more these days, don’t put myself under too much pressure, today it worked. Michael played pretty well but I topped his game a little bit.’

Price reached the top of the world rankings with his World Championship win in January and has stayed there since, but his spot is under some threat from Peter Wright.

The World Matchplay champion is insistent that he will be world number one by January, in a typical display of confidence from the 2020 world champ.

‘Winning [the Grand Prix], picking up this tournament will help to catch up on Gezzy. And we’ve got a few more to come up. Obviously I’ve got to defend the World Championships, and I’ve already said I’m going to win the Worlds this year. So I should be number one at the beginning of next year.’

Price is less convinced, reminding Wright that he has never topped the world rankings before.

‘I’m number one now, I’ve been there, done it,’ he said. ‘Peter’s obviously chasing it, he’s never been there

‘As long as he keeps chasing then I’m in a good place.’

Wright gets his Grand Prix campaign underway on Monday night against Rob Cross.