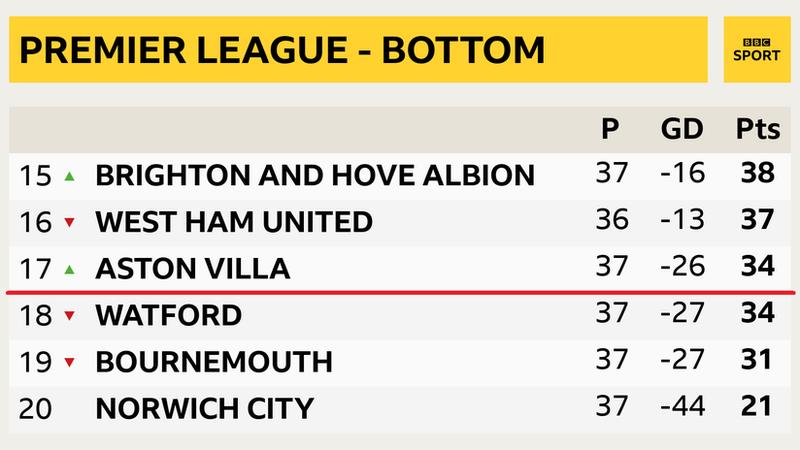 Sunday’s Premier League season climax is set to be a nerve-shredding one for teams battling to avoid relegation.

Norwich are certain to finish bottom of the table – and two from Aston Villa, Watford and Bournemouth will join them in the Championship next season.

Tuesday was a significant day in the battle to avoid against the drop. Aston Villa beat Arsenal 1-0 to climb out of the bottom three – for the first time since 28 February – on goal difference, helped by Watford’s 4-0 thrashing at home by Manchester City.

Though West Ham are not mathematically safe, they have a vastly superior goal difference than the three teams in trouble below them, as well as a game in hand – Manchester United at Old Trafford on Wednesday.

How are final positions determined?

If teams finish on the same points then goal difference comes into play. Aston Villa’s victory over the Gunners took them to -26, a single goal better than Watford and Bournemouth’s -27.

If they still cannot be separated then goals scored comes into the equation, with Villa netting 40, Bournemouth 37 and Watford 34.

If teams still remain tied then a new addition from this season sees the use of a head-to-head record between two clubs, with the team collecting the most points finishing higher up the table.

Going further still, should teams still remain deadlocked then there is the highly unlikely scenario of a play-off taking place at a neutral ground. 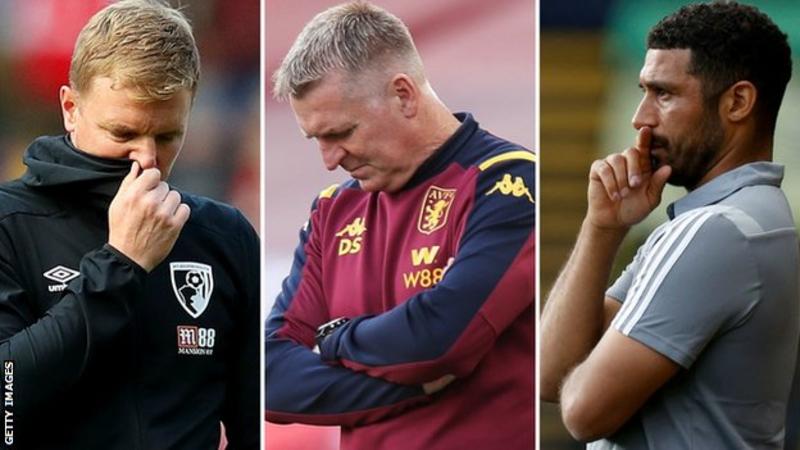 Back-to-back victories have steered West Ham away from the bottom three places and the Hammers need a point from their remaining two games to guarantee top-flight football next season.

David Moyes’ side are currently three points clear of 18th place but their -13 goal difference is a very healthy one compared to the other three teams fighting for survival.

That said, if the players have already switched off and suffer two very big thrashings against Manchester United and Aston Villa, there is a slight possibility of dragging them down into trouble. Very slight.

Having achieved promotion, Aston Villa spent big last summer by bringing in almost £150m worth of talent, but have not managed to stay clear of the danger zone.

They saw fellow relegation rivals Watford thumped by Manchester City earlier on Tuesday and Dean Smith’s side took full advantage by claiming a huge victory. Villa have picked up form at just the right time, unbeaten in their last three games.

“We needed this,” said Villa boss Smith after beating the Gunners. “We’ve got to go and do the same against West Ham on Sunday.

“It’s a big boost, that’s for sure. We knew we had to win to catch Watford up. Now we’ve got the season in our own hands and that’s all you can ask for.

“Watford can go and win at Arsenal so we have to make sure we win at West Ham.”

Villa were only promoted from the Championship last term and could be relegated from the Premier League for the second time in five seasons.

The Watford owners made the shock decision to sack manager Nigel Pearson with two games to go, despite the former Leicester boss guiding them off the foot of the table and out of trouble when appointed in December.

Former England Under-21 midfielder Hayden Mullins was put in temporary charge but suffered a disastrous 4-0 defeat against Manchester City in their penultimate game, dropping them into the bottom three and it could prove fatal.

“It is a tough league, there are no guarantees,” Mullins told BBC Radio 5 Live. “One season to another it is totally different. All I know is that we need to go to Arsenal now and get a positive result.

“We spoke about staying together and doing the right things. When you get to this stage of the season it is tough but we will deal with it the way we know how – stay confident and prepare as best we can for Sunday.”

The Hornets have been in the top flight since 2015.

Bournemouth had risen from the lower reaches of League Two to become an established Premier League team under Englishman Eddie Howe, who led them to three promotions in six seasons.

But it has been a struggle this term, losing 22 of their games – bottom team Norwich are the only side to have suffered more defeats.

Howe said after his side’s 2-0 loss to Southampton: “The key thing is while there’s still hope we have to believe, until such time as it is mathematically impossible.

“You never know in football, crazy things happen. That’s my immediate thought, but very disappointed. A big chunk of our destiny and our future was still sort of in our hands. It feels like that has slipped away a little bit.”

Like Watford, the Cherries have been in the top flight since 2015, after pipping the Hornets to the Championship title in 2014-15.