DUBLIN, Ohio – This time, Patrick Cantlay got the job done on the back nine on a Sunday in the Memorial.

Last year Cantlay took a two-shot lead to the final nine holes in the final round at Muirfield Village but didn't make another birdie and instead made three bogeys and missed a playoff by one shot.

This time around, Cantlay, after making the turn in 5-under 31, didn't extinguish his momentum and birdied the 11th, 14th and 15th — and made a clutch par out of a deep greenside bunker in the 72nd hole — en route to a two-shot win in Nicklaus' annual get-together.

He started the day 4 back.

Patrick Cantlay is -7 thru 14 today.#LiveUnderParpic.twitter.com/3DCByjrrbG

"It feels great," Cantlay said. "It's been a while since I've won. To win on a golf course like this, in front of Jack, it's hard to describe."

A few words of advice from Nicklaus guided Cantlay on the back nine. This week, Nicklaus talked with Cantlay on how to close out a tournament.

"He said just relax and have fun and look around and see all the people having fun and have a good time with it. That's why you're there," Cantlay said. "I felt at ease having his words in my head coming down the stretch. Meant a lot."

With a closing 8-under-par 64 — the lowest final round by a Memorial champion — Cantlay finished at 19 under and two shots clear of Adam Scott and four clear of Martin Kaymer. Scott (68) was trying to win for the first time since the 2016 WGC-Cadillac Championship.

WINNING HANDSHAKE: Why shaking hands with Jack is a prize to remember 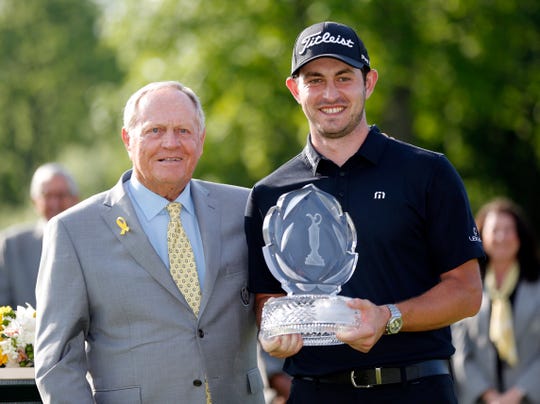 Kaymer, the 54-hole leader by two shots, was trying to win for the first time since the 2014 U.S. Open. He upped his advantage to four with three birdies in his first seven holes. But Cantlay kept coming and Kaymer bogeyed three holes in a five-hole stretch.

Tiger Woods closed with a 67 and tied for ninth in his final tournament before the U.S. Open at Pebble Beach, where he won the national championship in 2000 by a record 15 shots and tied for fourth in 2010.

HANEY: Remarks about Korean golfers were 'based on statistics and facts'

It was the second PGA Tour title for Cantlay, the former world No. 1 amateur for 54 weeks whose career has been marred by a back injury that nearly forced him out of the game and the death of his best friend and caddie, Chris Roth. Roth was killed in a hit-and-run while the two were crossing a street in Newport Beach, Calif., in 2016.

During a stretch of three years, Cantlay played just nine tournaments while dealing with a back issue that was finally diagnosed as a stress fracture in his L5 vertebrae. After he won the 2017 Shriners Hospitals for Children Open, Cantlay kept putting himself in position to win a second Tour title.

He has finished T-15 or better nine times. In his last three individual starts before the Memorial, he tied for ninth in the Masters and tied for third in the RBC Heritage and PGA Championship.

"This win validates my confidence that I can beat the best players in the world on a golf course that is set up like a major championship," Cantlay said. "It does a lot for my confidence."