It looks as if international gymnastics officials will get a second chance to do right by Simone Biles.

In a 60 Minutes interview Sunday night, the Olympic champion was shown training a Yurchenko double pike vault, a skill no woman has tried yet in competition. Should Biles decide to do it at the Tokyo Olympics, or a World Cup meet before that, the International Gymnastics Federation (FIG) will have to assign it a value.

Which means it can either recognize Biles’ greatness, or it can punish her for being better than everyone else and continue dumbing down the sport. 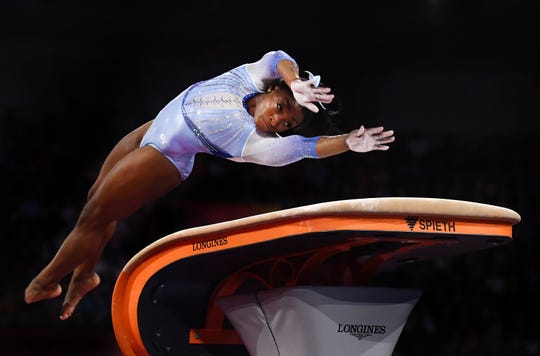 Simone Biles competing on the vault at the world championships in Germany in 2019. (Photo: Laurence Griffiths, Getty Images)

Given the FIG’s track record, I’m not overly optimistic about what it will choose.

Simone Biles could be the first woman to attempt a Yurchenko double pike in competition, say her coaches. Only men have landed it. “It’s very, very challenging… people can get hurt… it’s a very dangerous vault,” says Biles’ coach, Laurent Landi. https://t.co/ovlrulJYIOpic.twitter.com/qQTxKeUuNk

It was two years ago that the FIG undervalued Biles’ double twisting-double somersault dismount off balance beam. Intentionally so.

Every gymnastics skill is assigned a numerical value. The more difficult the skill, the higher the number and, theoretically, the higher the total score for a routine. The women’s technical committee, which is responsible for assigning skills their value, said in a statement that part of its reasoning for not giving Biles’ dismount the full credit it deserved was that it wanted to discourage other athletes from trying skills they are not capable of doing.

“In assigning values to the new elements, the WTC takes into consideration many different aspects; the risk, the safety of the gymnasts and the technical direction of the discipline,” it said. “There is added risk in landing of double saltos for beam dismounts (with/without twists), including a potential landing on the neck.

“Reinforcing, there are many examples … where decisions have been made to protect the gymnasts and preserve the direction of the discipline.”

Imagine telling Michael Phelps or Usain Bolt they needed to give their competitors a second or two head start. Or adding extra gates when Mikaela Shiffrin races because other skiers aren’t as good at slalom as she is. That’s essentially what the FIG did.

'A COMPELLING CHARACTER:' Simone Biles to star in new behind-the-scenes docuseries ahead of Olympics

NANCY ARMOUR: Simone Biles penalized for having skills other gymnasts can't pull off

SIMONE THE GREAT: Simone Biles surprised by her greatness. 'I really don't know how I do it sometimes'

“They do not like that Simone has made a mockery of the open-ended Code of Points. And made it so that a competition isn’t a competition before the competition starts,” said Spencer Barnes, author of the popular gymnastics blog, "The Balance Beam Situation," and a co-host of the GymCastic podcast.

“But she’s kind of broken the system they created.”

Unlike the old 10.0 scoring system, there is theoretically no maximum score in the current, open-ended system. Gymnasts compile points for both the skills they do and execution of them.

When the FIG ditched the 10.0 scale, the thinking was that it would both reflect and encourage technical advances in the sport. That’s exactly what Biles has done, her natural athletic ability and savvy in training allowing her to push boundaries. She’s won every meet she’s entered since the 2013 U.S. championships, often by wide margins, and about the only way she won’t collect another slew of gold medals in Tokyo is if she doesn’t go.

But rather than celebrating the bar Biles is setting, the FIG has shown it would rather side with the poor gymnasts who can’t keep up. That’s as insulting to other gymnasts as it is to Biles. The FIG might as well stop awarding titles and medals and just give everyone a participation trophy if it’s going to take that attitude.

Sports is not only about competition, it’s about testing one’s limits and pushing to expand them. While it’s true few, if any, gymnasts can keep pace with Biles now, the same was once said about Nadia Comaneci. It wasn’t even a decade ago that it seemed unfathomable someone could be better on vault than McKayla Maroney.

Who’s to say there isn’t a little girl watching Biles now who won’t be inspired to reach similar heights or go beyond them? Isn’t that the whole point of elite sports?

Simone showed a competition-ready Yurchenko double pike, so we discuss all of the arguments & salient points she will need in her inevitable rebuttal letter to the FIG when they don’t give it a 6.8 D. Always pre-prepare for the injustice of it all! https://t.co/jEEiJ0A7aepic.twitter.com/vP2G0E3am2

“There is the assumption, I think, among a lot of people in gymnastics that Simone is an outlier and we’ll never see someone else at her difficulty, and maybe that’s true,” Barnes said. “She’s naturally more talented, and more technically talented, than anyone we’ve seen in gymnastics before. But to think we couldn’t have another Simone is naive. Sport is always progressing.

“She’s not an alien, she’s not superhuman. She’s just really good at gymnastics,” he added. “To think of her as an outlier does her a disservice and everyone who could come after her a disservice.”

The FIG will insist this is about safety, that it wants to remove the incentive for gymnasts to chuck skills they can’t actually do. Yet the FIG also thinks it’s fine – just fine! – for gymnasts to compete in event finals without a warm-up.

Plus, hammering someone’s execution score would be an equally effective deterrent for recklessness.

Should Biles do the Yurchenko double pike, it will be harder for the FIG to defend undervaluing it because a precedent has already been established on the men’s side. There was no such comparison available for her beam dismount, as men don’t compete on beam.

But this isn’t even about the number so much as how, and why, the FIG arrives at it.

Biles isn’t hurting the sport. But in trying to rein her in, the FIG is.