NHL columnist Kevin Allen provides analysis of the 31 players taken in the first round of Friday's draft in Vancouver.

The Devils are getting a No. 1 center and a player they can market. Hughes, an American, has been compared to Patrick Kane because of his quickness and ability to dart into the seams of the defense. He posted 34 goals and 78 assists in 50 games this season for USA Hockey’s National Team Development Program. He’s expected to play next season in the NHL. He’s the younger brother of Vancouver Canucks player Quinn Hughes.

Some NHL scouts thought Kakko was the best prospect in this year’s class, or at least tied with Hughes. He has been compared to Florida’s Aleksander Barkov, mostly because he broke Barkov’s scoring record by producing 22 goals as an under-18 player in the Finnish Elite League. 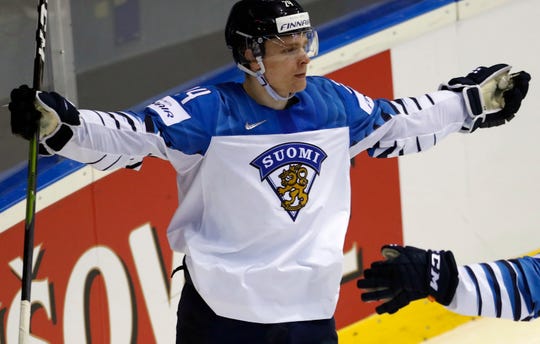 He’s the big center that every coach covets. He’s strong on the puck and possesses the skill to be a top-line performer. He had 25 goals and 73 points in 62 games for the Blades this past season. He’s a Mark Scheifele type center.

Scoring 26 goals and 71 points in 67 games, Byram is considered the best puck-moving defenseman in the draft. He’s the speedy, flashy offensive star that many teams are trying to find. He can quarterback a power play and a trigger the offense with his skating and vision. He doesn’t have a strong defensive game and he will need to clean that up to play in the NHL.

He’s a smart, flashy center, capable of making a highlight-reel pass or a game-saving defensive play. Has hockey in his DNA. His father was former NHLer Alfie Turcotte. Alex is a creative player with the speed necessary to excel in today’s NHL. Seems to always make the best play.

Among the available defensemen, he might be the closest to being ready for pro hockey. He’s mature beyond his years. He’s already played for Germany at the World Championships. He helped his German team win a league championship. Should end up being a quality shutdown defenseman at the NHL level.  He has good mobility and can handle and shoot the puck.

In 68 games for Lethbridge, Cozens posted 34 goals and 84 points. Scouts like his skating and his intelligent playing style. He doesn’t have to score to help his team. Solid passer, strong on the puck and competes hard. He is the first player from the Yukon to go in the first round.