After her team qualified for its third consecutive Sweet 16 Tuesday, N.C. State women’s associate head coach Lindsay Edmonds breathed a sign of relief. Trailing at halftime, the top-seeded Wolfpack rallied in the third quarter to pull away from eighth-seeded South Florida, winning 79-67 to advance in the women's NCAA Tournament.

Amid the celebration, Edmonds felt a pang of heartache. Because while she’s of course thrilled to continue the quest for a national championship, another week in Texas also means another week away from her two oldest daughters, 6-year-old Nylah and 3-year-old Halyn.

When the NCAA announced plans for a bubbled tournament played entirely in Texas, it told teams they’d be limited to a 34-person travel party. That included everyone: players, coaches, trainers, administrators … and children. If coaches wanted to bring their kids into the bubble, they’d count against the 34-person total — even if the kids were nursing infants. 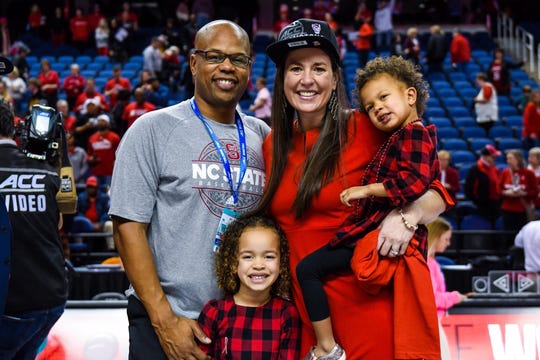 That’s why Edmonds, 38 and in her eighth season with the Wolfpack, kissed her two oldest daughters goodbye as she boarded a charter for San Antonio, toting 6-month-old Ahlyna, who’s still nursing. Her husband, Ulrick, came along to help care for Ahylna.

This came after a heartbreaking conversation with Halyn, 3.

“Last season, before COVID obviously, Nylah went on her first charter trip to Pittsburgh,” Edmonds said. “I promised Halyn that she’d get to go on the plane next time. So when she found out Ahlyna was going on this trip and not her she told me, ‘But mommy! I was supposed to be the next one to go on the plane!’

"It was really hard to look at them and tell them I wasn’t sure when I’m coming back.”

Edmonds had been dreading the conversation for months. Like many moms in coaching, she’d seen the NCAA news and been dumbfounded — were they really going to force women, especially nursing moms, to choose between their families and their teams?

The NCAA didn’t offer much context on the decision, reiterating to USA TODAY Sports that schools decided the 34-member travel party, and that children under the age of 2 wouldn’t undergo daily COVID testing.

The guilt, Edmonds said, is overwhelming. N.C. State had to leave behind two senior managers to make room for Ahlyna and Ulrick, which Edmonds feels sick about. Despite daily FaceTime sessions she misses her girls like crazy; she cried as she talked about how hard it is to be away from them when they’re so young. Until now, the longest she's been away is seven consecutive days, during July recruiting. 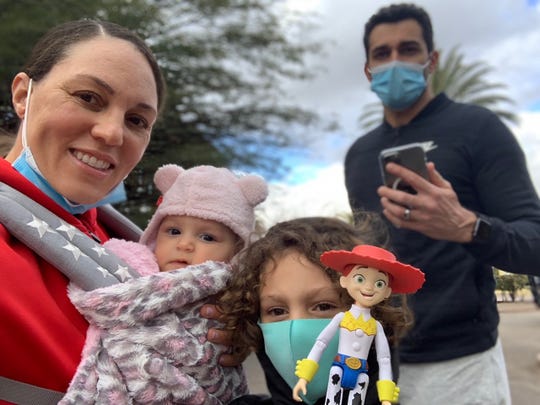 Arizona head coach Adia Barnes brought her daughter Capri (6 months) and her son Matteo (5) into the bubble. Her husband Salvo Coppa is an assistant on her staff. (Photo: Courtesy Adia Barnes)

And while she’s confident — and borderline concerned — that Nylah and Halyn are being spoiled beyond comprehension by two sets of doting grandparents, Edmonds and others worry about the message the NCAA is sending to the next generation of aspiring coaches who want to juggle basketball with family.

“Once again, we’re leaving working moms out of the conversation,” said interim Florida State coach Brooke Wyckoff, who co-founded Moms in Coaching in 2014 as a nationwide support system for her female colleagues. “It’s a byproduct of our society. What can you really expect if, as a first world country, we’re already not taking care of mothers on maternity leave?”

It’s especially galling given the last year. COVID has taken a particularly hard toll on working moms; studies have shown that thousands of women have dropped out of the workforce, and experts are worried it could take years to make up what’s been lost.

Edmonds, Wyckoff and dozens of other moms in coaching often have to get creative to excel at both their jobs. When she's recruiting, Edmonds ships breast milk overnight to her home in Raleigh.  But in the bubble, where teams can’t leave the hotel, that’s not a possibility. Coaching moms understand they’ll need to pay extra to bring their kids with them on road trips — but children under 2 don’t count on regular flight manifests, so why should they count on NCAA charters?

The NCAA, as we’ve been reminded this week, has a long history of dropping the ball on pretty much every issue imaginable. This has been a season like no other, and pulling off a tournament at one big site, in a bubble, isn’t easy. There’s sympathy for that, certainly. But there’s no sympathy for not thinking ahead about working moms.

“The thing that’s shocking is, we’re a women’s sport and we, the women who coach, are an afterthought,” said Arizona coach Adia Barnes, who brought her 6-month-old daughter and 5-year-old son to Texas. “I’m a head coach, so I dictate the travel party; my kids were coming regardless. But what I think about are assistants and support staff — those are really difficult conversations to have with your head coach, asking, 'Hey, can I have two extra spots?'”

Barnes and other coaches pointed to the WNBA, where the league put together a thoughtful gameplan for playing moms who would need to bring their kids to Florida. The WNBA had playrooms in hotels, didn’t test kids under 10 and worked with moms from the jump.

“There wasn’t one positive case in the WNBA bubble,” Barnes said. “The WNBA was successful — how was there not even a conversation between the NCAA and the WNBA about how to make this bubble successful?”

The answer is pretty simple: the WNBA is run by women, and the NCAA definitely is not.

What’s worse, though, is we’ve learned in the last week that most of the time, the women, working moms and not, aren’t even considered. 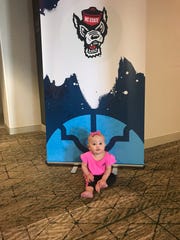 NC State's littlest and youngest fan is 6-month-old Ahlyna, the youngest daughter of associate head coach Lindsay Edmonds, who made the trip to Texas with mom because she's still being breast fed. (Photo: Courtesy Lindsay Edmonds.)

“It’s so unfair to be put in the position of, ‘Do I take care of my child or do I go with my team?’” Edmonds said. “I’m a better mom cause I’m a coach and I’m a better coach cause I’m a mom. And I want players right now to see that you can do both.”

She’s trying to stay positive. If Edmonds and NC State make the Final Four, they’ll be in San Antonio over Easter weekend. Anticipating this, Edmonds already put together Easter baskets and hid them. She and Ulrick left surprises in the girls’ shoe bins, and special notes for them on the breakfast bar. And she’s driven by wise words from Nylah, her 6-year-old.

“Before we left she told me, ‘Mommy, you’re the best team ever,” Edmonds said, her voice catching. “And I said, ‘You’re right, we are.’ And now we’ve gotta show it.”

It’s just too bad that if NC State does exactly that, Edmonds won’t be able to share it with her girls.