Players and scouts adjusted their methods to account for the absence of a traditional combine in Indianapolis. 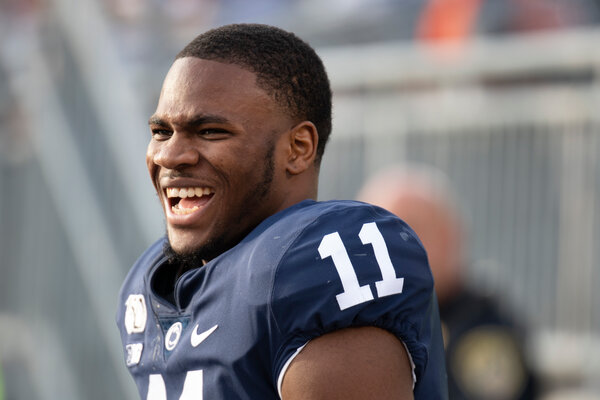 Micah Parsons relaxed his 246-pound body as he decelerated from running the 40-yard dash in front of N.F.L. scouts at a predraft showcase hosted by his college, Penn State, in late March.

When Parsons, a linebacker projected to be one of the first defensive players selected in the 2021 N.F.L. draft, learned he clocked in at 4.39 seconds — a time comparable to receivers and running backs — he pounded his chest and pointed upward.

“It’s like a weight lifted off my shoulders,” he said afterward. “Now I can finally relax.”

Parsons, 21, is one of over 100 Division I players who opted out of the 2020 college football season because of coronavirus concerns, leaving N.F.L. talent evaluators precious little current information to go on in a year further hindered by the absence of a traditional scouting combine. Parsons knew that his data offered his strongest argument for why a franchise should still draft him a year after his last in-game action.

Prospects and N.F.L. teams are adapting to having to rely on university-hosted workouts, teleconference interviews and video analysis, data that isn’t standardized and, in most cases, wasn’t collected in person, to make their draft cases.

College-hosted workouts, or pro days, took on added importance after the N.F.L. canceled the in-person workout portion of its draft scouting combine, typically hosted in Indianapolis every spring. That decision meant players would conduct their 40-yard dashes, bench presses and vertical jumps — among other physical tests that can sway draft slotting drastically — at their college facilities, rather than at a neutral site with standardized measures.

Many players who had opted out spent the college football season and beyond prepping specifically for that testing, as many draft eligible players do each spring. Without a college season, they had longer than usual to train. Parsons signed with an agency, Athletes First, and moved to Santa Ana, Calif., in September to train full time and focus on how he would perform in front of scouts in March.