This was the season “load management” became a common phrase in our basketball vocabulary. This was the season N.B.A. players finally began to feel a little bit safer publicly discussing their vulnerabilities in the arena of mental health.

This was the season, more than any other, that the well-being of those on the floor was a daily point of emphasis.

Yet here we are in the N.B.A. finals, at the sport’s supposed pinnacle, confronted by one of the most dispiriting injury sagas #thisleague has ever witnessed.

The legend of Willis Reed gamely hobbling onto the floor for Game 7 of the 1970 finals and inspiring the Knicks to a title-clinching victory can no longer be passed along to future generations without tacking on a reference to its sad new companion:

The cautionary tale of Kevin Durant.

What happened to Durant on Monday night was the unfortunate inverse of the Reed fairy tale. Durant was cleared to return to the Golden State Warriors’ lineup after a monthlong absence, amid some grumbling (and even criticism) about how long it was taking for him to get back, then suffered what has been one of the most daunting injuries for basketball players to face.

Durant’s ruptured Achilles’ tendon in his right leg will, at a minimum, sideline him well into next season. The Warriors are fond of insisting to reporters that they’ve seen it all over these past five years of title contention, but there has never been an injury in the finals of this magnitude, especially when you factor in Durant’s looming foray into free agency this summer.

Perhaps the emotion of the home crowd Thursday night, when the Warriors at last bid farewell to Oracle Arena after 47 years, can help the two-time defending champions keep these finals going against the Toronto Raptors, even though they will be without Durant and quite possibly Kevon Looney, who aggravated an upper body injury during Monday’s game. But Golden State is undeniably wheezing as it heads into Game 6, for which we can offer these six observations to get you ready:

Durant deserves an apology from a lot of people.

We will surely learn more details, as time passes, about the decision-making behind the scenes that landed Durant back in the Warriors’ starting lineup Monday night.

The Warriors insisted that Durant’s clearance was decided collaboratively with the player and medical experts both inside and outside the organization — but was the team pushing for that clearance? Did a push to return actually come from Durant? What led the doctors Golden State consulted to advise, as Warriors Coach Steve Kerr said Wednesday, that Durant couldn’t do serious additional damage to himself by playing beyond re-aggravating last month’s calf injury? Were the Warriors or Durant, or both, swayed by external pressure about Durant’s absence? Or was there pressure from inside the Golden State locker room, real or imagined, after a number of fellow Warriors (Klay Thompson, DeMarcus Cousins, Andre Iguodala and Looney) were lauded for playing through various ailments?

Expect to hear such questions posed over and over for the rest of this series — and beyond.

What we know for certain is that Durant just made a very selfless and costly comeback. Three weeks before he is expected to become the most coveted free agent in the game, Durant stepped onto the Scotiabank Arena hardwood in Toronto and exposed himself to what can only be classified as a catastrophic injury.

Durant’s many critics conveniently forget that — even before this setback — all he had done as a Warrior was give and give to this organization while absorbing ceaseless scrutiny about his competitive nature and legacy after signing with the Golden State powerhouse in the summer of 2016.

Entering his second season as a Warrior, Durant consented to a contract discount in the $10 million range that helped Golden State re-sign Iguodala and Shaun Livingston. Coming into this season, Durant took another discount in the $5 million range, which helped facilitate the signing of Cousins.

Proper recognition for the contributions Durant has consistently made as a Warrior, while taking the supposed “easy way out,” is long overdue. As no less an authority than Stephen Curry put it after Game 5, “He went out there and sacrificed his body.” 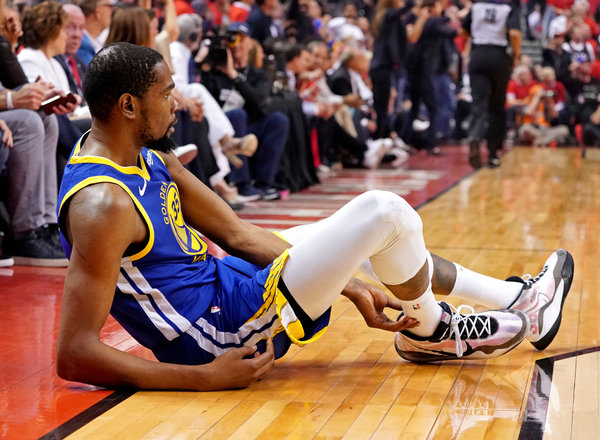 You’re going to have to wait a bit for a deeper understanding of how Durant’s health status affects the greater free-agency landscape.

It probably won’t be until after the N.B.A. finals that we find out whether Durant will seriously consider picking up his player option for next season valued at $31.5 million — or if he intends to go through with his long-term plans to become a free agent this summer.

All indications Tuesday, in conversations with various league insiders, suggest Durant will have no trouble commanding four-year maximum offers of $164 million from the teams that were already in pursuit, such as the Knicks and the Los Angeles Clippers, even after getting hurt.

The way Kawhi Leonard has rebounded in Toronto this season, after losing almost all of the 2017-18 campaign to injury in San Antonio, has only amplified such notions.

The Raptors traded for Leonard without knowing if they could keep him for more than one season — or how he would hold up healthwise after he played just nine of 82 games in his San Antonio swan song. The Lord of Load Management is now right there with Durant at the head of the 2019 free-agent class — and still the favorite to win finals M.V.P. honors with the Raptors holding a 3-2 series lead.

N.B.A. teams will always take risks for difference-makers like Durant and Leonard. Always.

Game 5 was the game Warriors officials had targeted for Durant’s return before the finals began.

It may appear to outsiders that the Warriors rushed Durant back for Game 5 after falling into a 3-1 series deficit. But Game 5, as we reported last week, was indeed their initial target — before Golden State lost Games 3 and 4 at home.

Yet we repeat: Further probing and second-guessing are unavoidable for the Warriors. Durant played 12 of the game’s first 14 minutes after Coach Steve Kerr told reporters beforehand that he planned to use Durant in “short bursts.”

Durant sat out for 32 days after suffering a strained right calf in the Warriors’ second-round series against the Houston Rockets, practiced once Sunday and played all but 2 minutes 48 seconds of the opening quarter.

The question won’t soon fade: Was it too much too soon?

The best-case scenario for Durant’s return is likely eight months.

In the modern history of Achilles’ tears, no N.B.A. player has recovered faster than Indiana’s Wesley Matthews in 2015.

Matthews was injured with the Portland Trail Blazers in March 2015 and was back in time to start the next season with the Dallas Mavericks after signing a four-year, $70 million contract in free agency.

This year, Dallas is cautiously optimistic that Jose Juan Barea, who tore his right Achilles’ in January, has a shot at recovering in time for the start of training camp in late September.

Those who know Durant best expect him to be uber-diligent in his rehab. If he can recover in eight months, that would put him on course for a February 2020 return.

The bigger unknown, of course, is how long it would take Durant, who turns 31 in September, to regain peak form. It has long been assumed that Durant’s game would age gracefully, given his lean build and tremendous size, but no injury in basketball inspires dread like an Achilles’ rupture.

Draymond Green is out of wiggle room.

After going eight games without one, Green has been hit with a technical foul in each of the past two games of the finals to take his total for the postseason to six.

That means he has to get through Game 6 without a tech to avoid missing a potential Game 7 through suspension.

Seven technicals in the postseason for any player triggers an automatic one-game ban. The last thing the Warriors can afford, in their battered state, is losing Green to histrionics when they’re already down Durant and likely Looney.

There are still two teams in this series.

Durant’s fate has invited so much focus on the Warriors that we’re not talking enough about the Raptors and the mammoth opportunity they squandered by losing to Golden State after Leonard’s fourth-quarter brilliance in Game 5.

The Raptors still appear to be a strong favorite to manufacture the last win they need for the first championship in franchise history. But there are lingering questions for them, too, despite winning 14 of 20 quarters in the series with their superior length and athleticism.

Such as: How will they respond mentally to their late collapse in Game 5? And: Can the Raptors, even with all their apparent advantages, really go 3-0 in Oracle in this series by winning Game 6?