Isaiah Thomas finally felt a conversation was in order.

Thomas, a member of the Washington Wizards in 2019-20, was playing in Philadelphia against the 76ers. A fan had been cursing at him, while holding outstretched middle fingers from both of his hands.

After it happened a third time, Thomas walked into the stands — calmly, he said — to talk to the fan.

“I’m not going to go in there by myself, trying to raise havoc,” Thomas said. “But in my situation, I needed to say something to that man and let him know that that was not right.”

The fan, Thomas said, quickly apologized, saying he was upset that a free throw Thomas had made prevented him from cashing in on a promotion for a free Frosty.

“That means you don’t respect me as a human being,” Thomas said. “I think that’s why players are so upset now. It’s like: ‘Are you looking at us like human beings? As people? Or just somebody you’re coming to watch?’”

The N.B.A., moving into the second round of the playoffs, has given fans plenty to watch, from the stunning play of Phoenix’s Devin Booker, the quick exit of the Los Angeles Lakers, and the aligning of the Nets’ stars to the battles of one-upmanship between Denver’s Nikola Jokic and Portland’s Damian Lillard.

But the playoffs have also been defined by unruly fan behavior as N.B.A. arenas started opening to near capacity in time for the playoffs. The last time there were this many fans in arenas, it was before the N.B.A. was at the center of the protests for social justice and equality that roiled the country in the fall. Fans are returning to watch many of the same players — but the players are not the same. The message from athletes, especially those who are Black, is that they want to be respected.

In New York, a fan spat on Atlanta Hawks guard Trae Young. In Utah, the family of Memphis Grizzlies guard Ja Morant was targeted with racist and lewd remarks while watching in the stands. In Boston, Nets guard Kyrie Irving had a water bottle hurled in his direction. In Philadelphia, a fan dumped popcorn on Washington’s Russell Westbrook as he left the floor after an injury. 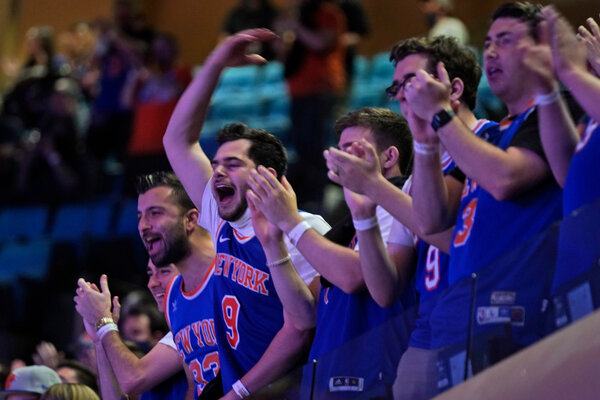 “What if he would’ve ran into the stands and put his hands on that fan?” Thomas said. “Everybody would’ve said he was wrong. But in any other setting in life, if I’m walking down the street and somebody pours popcorn on me, what do you think is going to happen?”

In some ways, raucous behavior is another indicator of a return to prepandemic life. Sports is often a bellwether for society, and to a point, extreme behavior is ingrained in fandom — hence the term fanatic. As the country reopens, airlines are experiencing boisterous conduct and people are fighting in stands at baseball stadiums.

In basketball, fans are stimulated by the charged atmosphere of the playoffs and some are spurred by liquid courage. The intimacy of the sport allows fans to be in proximity to players, and while players are in postseason form, security forces are not yet back in the rhythm of hosting this many fans for the first time in more than a year.

“The fans are emboldened and lessen the value of these athletes as human beings when they engage with them in this way,” said David West, a retired forward who won two championships with Golden State.

Emerging from the pandemic may have created a reckoning between N.B.A. fans and players. Some fans may have pent-up frustration from being isolated for so long. Kevin Durant, Irving’s Nets teammate, said pandemic quarantining had “got a lot of people on edge.” The incidents involve only a minuscule fraction of the thousands of fans who have returned to N.B.A. arenas. The egregiousness of the behaviors cannot be defined under a singular classification.

But some travel beyond the traditional heckling of, say, Spike Lee at Madison Square Garden taunting an opposing player. They involve subtle and overt racism — “underlying racism and just treating people like they’re in a human zoo,” Irving said. And while the interactions are not new, the infractions are being documented through social media and arena cameras, and players seem more willing to speak out against them.

“In general, it seems like this is what happens when people haven’t been outside for a year and a half,” said Louis Moore, an associate history professor at Grand Valley State University in Michigan. “Specifically, it’s part of who we are as fans. It’s fandom. It’s rowdyism. And then it’s even more specific when it looks like these N.B.A. incidents are targeted at Black athletes. That’s part of American sports.”

Before Irving, a former Celtic, returned to Boston, he asked fans not to be belligerent or racist. Black athletes in multiple sports, including the Celtics legend Bill Russell, who once had someone break into his home and defecate on his bed, have spoken about the racism they’ve experienced in Boston. The treatment dates all the way back to George Dixon, who was the first Black man to win a boxing world title and fought in the United States during the post-Civil War era.

The police in Boston arrested Cole Buckley, a 21-year-old from Braintree, Mass., on suspicion of throwing the water bottle toward Irving. Buckley pleaded not guilty to a charge of assault and battery with a dangerous weapon.

“I’ve had situations so often throughout my career where we don’t really talk about it, because we want to be mentally tough,” Irving said after the incident. “We want to be tough-minded. We don’t want to be called soft or we’re not man enough to deal with boos.”

As in Boston, opposing players have also spoken out against the treatment they’ve received in Utah. In 2019, two fans at Vivint Smart Home Arena were barred for using racist language toward Westbrook.

“You felt this sense of angst that exists with some of the fans,” West said of playing in Utah, adding, “I just never let it affect me, but it also never got physical with me.”

The fans involved in the first-round incidents were barred indefinitely from the arenas.

“There is zero tolerance for inappropriate and disrespectful fan behavior at our games,” Commissioner Adam Silver of the N.B.A. said in an interview. “Fans engaging in acts like that in our arenas will be caught and banned from attending. The safety of players, officials and all attendees is our top priority, which is why we have worked diligently with our teams and law enforcement to increase security presence at our arenas throughout the remainder of the playoffs and will pursue all legal remedies against anyone who violates our fan code of conduct.”

In Utah, the Jazz owner Ryan Smith provided Morant’s family with courtside seats for Game 5. Tee Morant, Ja’s father, praised the organization and Jazz players for their response, although his wife, Jamie, decided against returning to Salt Lake City.

“It was a nice gesture from the Jazz,” Tee Morant told ESPN. “It was unfortunate. It was just a few fans — most of them were great and cheering right alongside with us.”

Durant told reporters after the Irving incident that fans needed to “grow up” and treat players with respect. “These men are human,” he said, adding that players are not “animals” and “not in a circus.”

In 2019, Thomas received a two-game suspension after the Frosty incident, and two fans — the one who had held up his middle fingers toward Thomas and another heckler — were barred from Wells Fargo Arena for a year.

“The consequences, I don’t know what it should be,” Thomas said, “but I think it should be a little bit more so fans would think twice about what they do before they do it or what they say before they say it. But I don’t think the arena ban is scaring anybody off.”

He continued: “I don’t have the answer to what they could possibly do. I know the N.B.A. is on top of everything for the players, but something’s got to change for sure.”