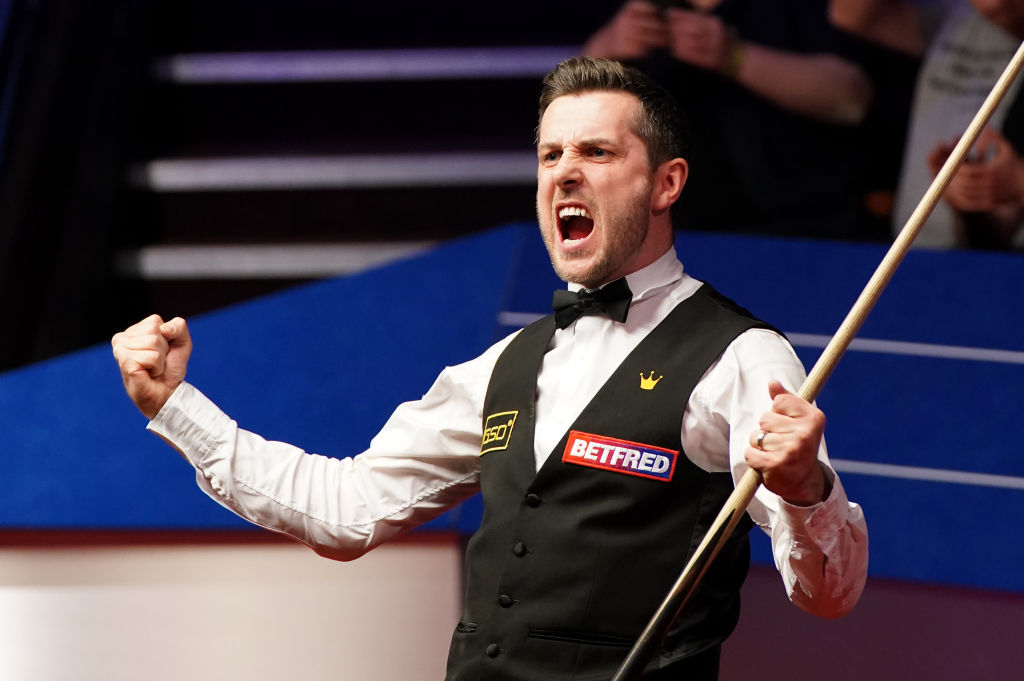 A picture of discipline, patience and resilience, Mark Selby has moulded a perfect snooker mindset to couple his immense talent, but it has been forged through pain, hardship and the deepest, darkest of nadirs.

Selby has now won the World Snooker Championship four times after his engrossing 18-15 victory over Shaun Murphy at the Crucible on Monday night, putting him on par with the great John Higgins for world title wins.

With only Stephen Hendry, Ronnie O’Sullivan and Steve Davis ahead of him in Crucible triumphs, Selby is unquestionably one of the all-time greats of the game.

His latest triumph comes four years after his last world title and with Selby having gone through a trying time on the baize, losing his world number one spot and going over a year without winning a tournament.

The 37-year-old described that spell in 2018-19 as ‘dark days’ but they were made dimmer by the darkest time he went through 20 years ago.

Of his difficult period on the table in recent years, Selby said: ‘Just for me in general, obviously with my past it flares up now and again.

‘With snooker you have so many highs and so many lows. When I was struggling, having the lows from the snooker, all the other bad thoughts come flooding back as well.

‘Having your close friends and family around, getting you to kick on and dig in really helped a massive amount. At times you don’t always think you can pick yourself back up but thankfully they’ve stuck by me through thick and thin and here I am, still here.’

The past Selby speaks of is a tragic one and makes his success in snooker – the most mentally taxing of sports – all the more impressive.

Mark lost his father David to cancer when he was just 16-years-old, eight years after his mother had walked out on the family.

Selby, understandably, hit the lowest of lows, even coming close to taking his own life, but came through it thanks to the help of his coach and family friend Alan Perkins, and the desire to honour his father’s memory.

Speaking to Rob Walker for WST earlier this year, Selby said: ‘When my father passed away, I moved in with Alan and for the first six months, I curled into a ball and didn’t want to to play snooker. It was the last thing on my mind. I was not in a good place to the point of nearly ending my own life, so that was tough.

‘Alan pulled me through that, tried to turn it around and say, if your father was here, he would want you to still be smiling and playing snooker and trying your best, so use him as a positive, kick on and do it for him.

‘At times, I was very, very close to doing it (taking his life) but told myself, my father wouldn’t want that, and neither would the people I’d be leaving behind, my friends and family.’

Now one of the greatest snooker players in history, Selby will hopefully be an inspiration to anyone who has reached that pit of desperation, showing that a much brighter future can be achieved.

Selby has also turned the difficulties of his childhood into incredible positives for his career, showing his opponents that he is always willing to fight through adversity, often much more so than they are.

Some fans are not enamoured by his bruising style of play, but to perform any other way would be to renege on his ethos of hard work.

‘It’s something my father tried to instil in me when I was playing when I was a lot younger. Whenever you’re on the table, give nothing away and try and make it as hard as possible for your opponent, if they still beat you, hold your hands up and say, “well played.” But try not to make it easy for them so they don’t have to work for it, make them feel like they’ve been in a game.

‘Having lost him when I was 16, so young, that’s always stayed with me and continued through my career.’

Selby is monstrously talented himself and his immense mental strength should never take away from the fact that he is a sensational cueist and break-builder who has now made 693 centuries in his epic career.

However, he admits himself that others at the top of the sport have more natural talent with a cue and he makes no apologies for making up for that with his granite mentality.

‘I go out there, try my hardest no matter what, blood sweat and tears and just try to win,’ Selby said while holding the World Championship title on Monday.

‘That’s the way I’ve got to do it. I’m not the most naturally gifted player, you look at Ronnie [O’Sullivan] and [Judd] Trump, they’re very, very talented, basically born with a cue in their hand. Whereas me, I’ve had to work hard all the way through my career.

‘Brought up on a council estate, my father had no money at all, passed away when I was 16, my mum left me when I was 8-years-old, it’s been tough so I respect the good things in life and try to keep my feet on the ground,’

A demonstration of his grounded attitude is his willingness to learn and develop his game, even as a multiple world champion.

In a bid to end his barren spell, Selby turned to coach Chris Henry just over a year ago, who he has given huge credit to for his fourth ascent of snooker’s highest mountain.

Henry, though, returns the compliment and told Metro.co.uk earlier in the season just how impressive Selby is to work with, especially on the mental side of the game.

‘He’s a brilliant student,’ said Chris. ‘We’ve done a lot of work online, he sits there with his notepad, he’s asking questions all the time about different aspects of the mental side.

‘He just does it, he’s one of these characters that just gets on with it. The seven step neural rewiring process that takes 30 minutes every day, he just does it. That’s the kind of person that’s going to do well. Once they’ve got the answers as to why they’re doing it, they just go

‘He’s easy to work with, you’d think he’d be the opposite. You get the amateur player who questions every word you say and argues with you, but the three-time world champion just says, “right, okay” and it’s quite refreshing.’

Now a four-time world champ, all of Selby’s hard work has paid off, more so than he could ever have imagined.

‘It’s incredible really,’ he said. ‘To win three [world titles] was unbelievable, to be on par with people like Mark Williams, so to now equal John Higgins, one of the all-time greats, on four is behind my wildest dreams.’

Selby has achieved more than almost anyone else to ever pick up a snooker cue, thanks in part to the driving force of the pain and hardship he has been through, but he would hand it all back, given the chance.

Speaking in January, he said: ‘If I could turn back the clock, I would give everything that I have achieved in snooker and all the money I have earned to have my dad back and see everything I have got – a great wife in Vikki, a fantastic daughter Sofia and even for him to see me as a professional. He never did see me play once as a professional.

‘It eats away at me day after day knowing he hasn’t been here to see that but hopefully he is looking down and seen what I have achieved and I have made him proud.’

Now a legend of the baize and an inspiration as a man, Selby will have unquestionably earned the pride of his father and, while his dogged determination on the table will turn off some fans, he deserves their unwavering respect.