TORONTO — Jason Peters, the former boys’ basketball coach at Lausanne Collegiate School in Memphis, has been having friends over to watch the N.B.A. finals on a giant projection screen on his porch. He used to organize these types of watch parties when the Grizzlies were in the playoffs. But in the wake of another suboptimal season, countless Memphians like Peters are rooting for another team this spring: the Toronto Raptors.

In fact, there may be no greater base of support for the Raptors outside Canada than in Memphis, a city that remains invested in the success of Marc Gasol, the Raptors’ starting center. Gasol is one win from an N.B.A. championship, and Memphis is ready to celebrate with him.

“He’d spent so much of his life here,” Peters, 49, said in a telephone interview. “It almost feels as if we sent him off to college — or out into the real world to see how he does.”

The Raptors, who acquired Gasol from the Grizzlies in a midseason trade, have a three-games-to-one lead on the Golden State Warriors ahead of Game 5 on Monday night, and Gasol has played a role that looks familiar to Grizzlies fans: rebounding and defending, gritting and grinding. In the finals, he is averaging 13 points and 6.8 rebounds a game as a member of Kawhi Leonard’s supporting cast. To those watching the games on Peters’s porch, only Gasol’s uniform seems strange.

“Very weird,” Peters said. “But then you see him playing with Kawhi, and it looks pretty good.”

For nearly 11 seasons, Gasol was synonymous with the Grizzlies. He helped lead them to seven straight postseason appearances, including a trip to the Western Conference finals in 2013 with the other members of the team’s celebrated core: Mike Conley, Tony Allen and Zach Randolph.

But Gasol’s roots in Memphis run deep. After spending his childhood in Spain, he moved to Memphis as a teenager when his older brother, Pau, was starring for the Grizzlies. When his parents were out of town and Pau was on the road with the Grizzlies, Marc would sometimes stay with Peters, his high school coach, who would chauffeur him around in his 1982 BMW 318i, a pint-size sedan that was not designed for a 7-foot, 300-pound man-child. Gasol had to poke his head through the sunroof.

Gasol eventually developed into enough of a prospect that, at age 24, after several seasons in Spain, he returned to Memphis to join the Grizzlies. He soon established himself as the type of roll-up-your-sleeves player whom Memphians adore. And given his background, they considered him one of their own. 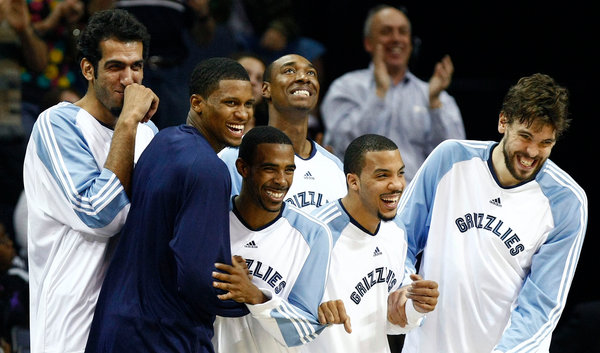 “He represents a lot of what the city is about: the hard work, the toughness,” said Jonnie West, a high school teammate who now works as the Warriors’ director of basketball operations.

Beyond basketball, Gasol had an actual presence in the city, where everyone knew him simply as Marc. He made regular appearances at St. Jude’s Children’s Hospital. He introduced his wife to “Bongo Lady,” one of the team’s most colorful fans. He bonded with the deli guys at Fresh Market. Gasol also noted in an interview last week that his son had been born in Memphis.

“So he’s a true Memphian all the way,” Gasol said.

And the Grizzlies were terrifically exciting — until they were not. As the losses mounted this season, it became clear that the team would need to embark on a rebuild. Gasol wanted to play for a contender, and the team’s front office sought to honor that wish. So, ahead of February’s trade deadline, the Grizzlies sent him north.

“He’s got an opportunity to get a ring,” Jason Wexler, the Grizzlies’ president, said in a telephone interview, “and I’m thrilled for him to go get a ring.”

At the time of the trade, no player in Grizzlies history had scored more points, grabbed more rebounds, blocked more shots or supplied more minutes. Jason Rosselot, a season-ticket holder since the Grizzlies arrived in Memphis in 2001, has one of Gasol’s All-Star jerseys hanging on his bedroom wall. Like Peters and so many others, he is watching the finals with interest.

“The Raptors really do seem like a perfect fit for him,” Rosselot said.

It is a rare thing for fans to continue rooting so hard for a star after he leaves. Cleveland burned LeBron James’s jersey when he took his talents to South Beach. Oklahoma City was heartbroken when Kevin Durant bolted for Golden State, with devastation quickly shifting to mockery. San Antonio drowned Leonard in a tidal wave of boos when he returned with the Raptors.

Some Memphians want to throw Gasol a parade.

“Absolutely,” said Malenda Meacham, the longtime Grizzlies fan known as Bongo Lady for her bongo-playing theatrics at home games. “Marc has always been Memphis to me. But I really want the Raptors to win.”

Still, there was a period of adjustment for all parties involved. After the trade, Meacham was so devastated about the direction of the Gasol-free Grizzlies that she boycotted games. And when Gasol made his post-trade debut for the Raptors, Meacham found it disconcerting to watch on television.

“Oh, it didn’t feel right,” she said. “And I felt terrible for Marc, because the team was doing their little warm-up thing, and he was just standing there not knowing what to do. I was just like, ‘Oh, he doesn’t need to be there. He needs to come back home.’”

But Gasol stayed, of course, and found his niche as a physical post presence — one who has been increasingly important for the Raptors in the postseason against a smorgasbord of now-vanquished behemoths like Joel Embiid of the Philadelphia 76ers and Giannis Antetokounmpo of the Milwaukee Bucks.

Memphis fans might have been more troubled by Gasol’s departure had he gone to a different team. But the Raptors, who are not considered rivals, were uniquely palatable: Gasol was not exactly bound for a dynastic power. He was going from one perennial striver to another, with a chance of helping the Raptors to their first title.

“I’m so sick of the Warriors,” Bongo Lady said.

For his part, Gasol said he had been keeping in touch with Conley, Randolph and Allen throughout the Raptors’ playoff run. He thinks of his former teammates often.

“Those guys are here with me,” Gasol said. “I am who I am as a player because I played with those guys.”

And he is who he is as a person, he said, in large part because of the years that he spent in Memphis.

“I got there as a 16-year-old teenager and left as a 34-year-old man and a father,” he said. “You build relationships with people that go beyond just being a player.”

He added: “I do miss Bongo Lady a little bit. She’s one of a kind. You know she’s a judge, right?”

Meacham, who practices family law and works as a part-time judge, had shoulder surgery last week. She said her surgeon — a fellow Grizzlies fan — suspected the injury was bongo related. (“Because of the way I flail around,” she said.) But she expects to be “bongo ready” by the start of next season, she said.

In the meantime, Meacham is taking some time off from work to recover at home. She has kept herself occupied by watching the Raptors chase a championship, which is an activity she had never anticipated enjoying quite so much.

“I’m staying up late and yelling at the TV,” said Meacham, who just wants to see her old friend do well — same as ever.