MANCHESTER CITY ended the day on cloud nine – but what a scare they were given by injury-hit Leicester.

Four goals in the first 25 minutes of a nine goal thriller ultimately proved to be enough to secure a ninth straight league win for Pep Guardiola’s leaders. 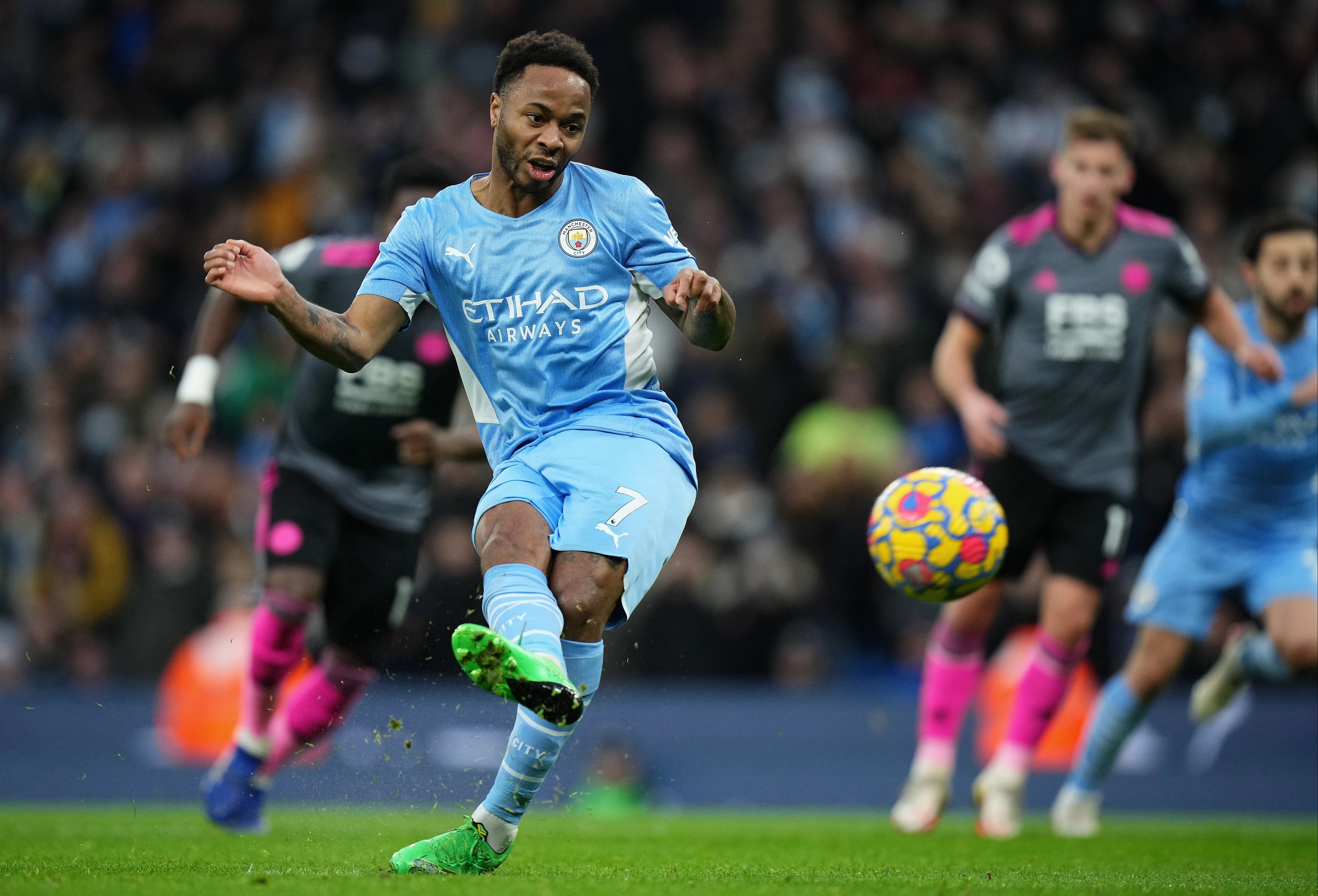 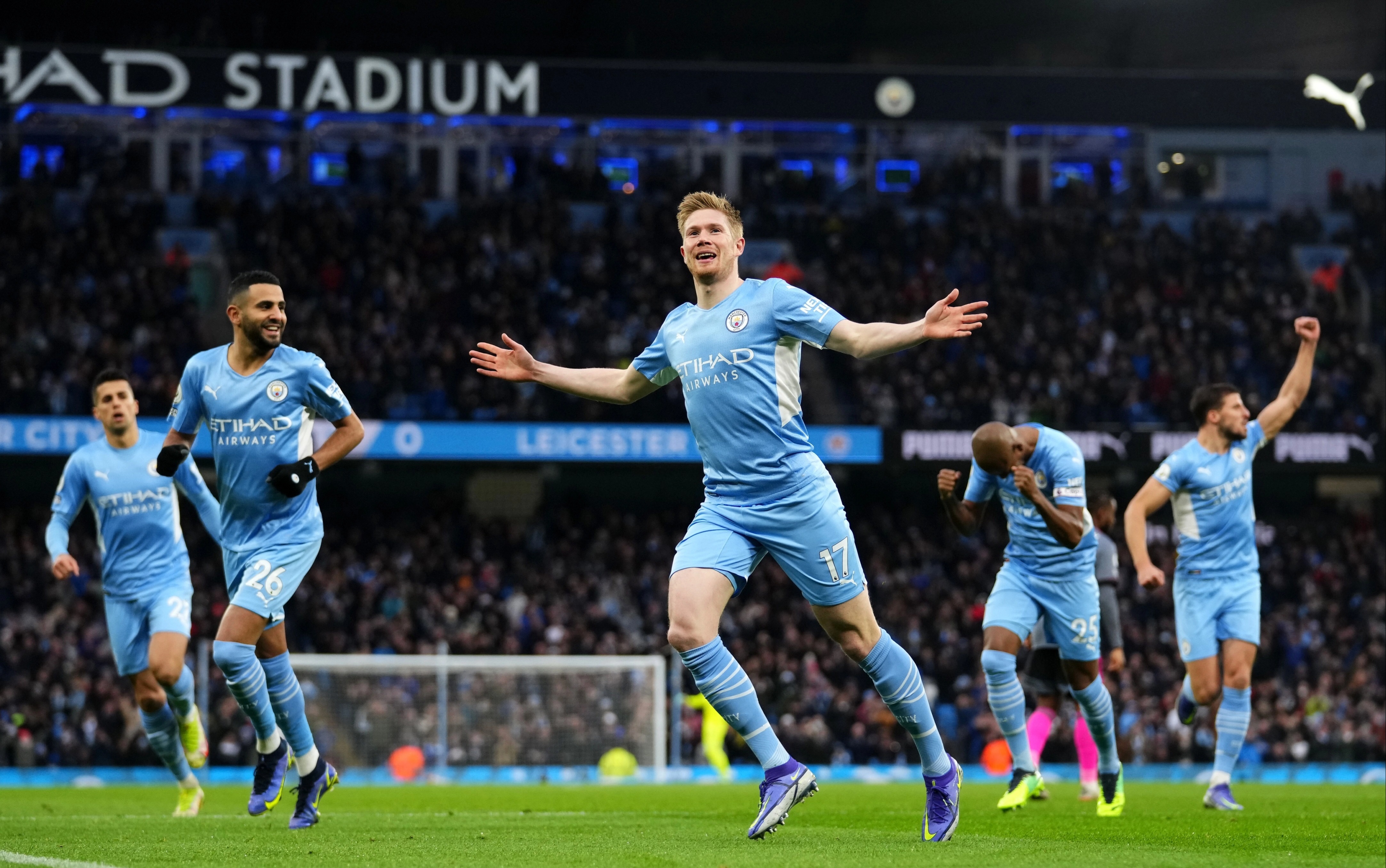 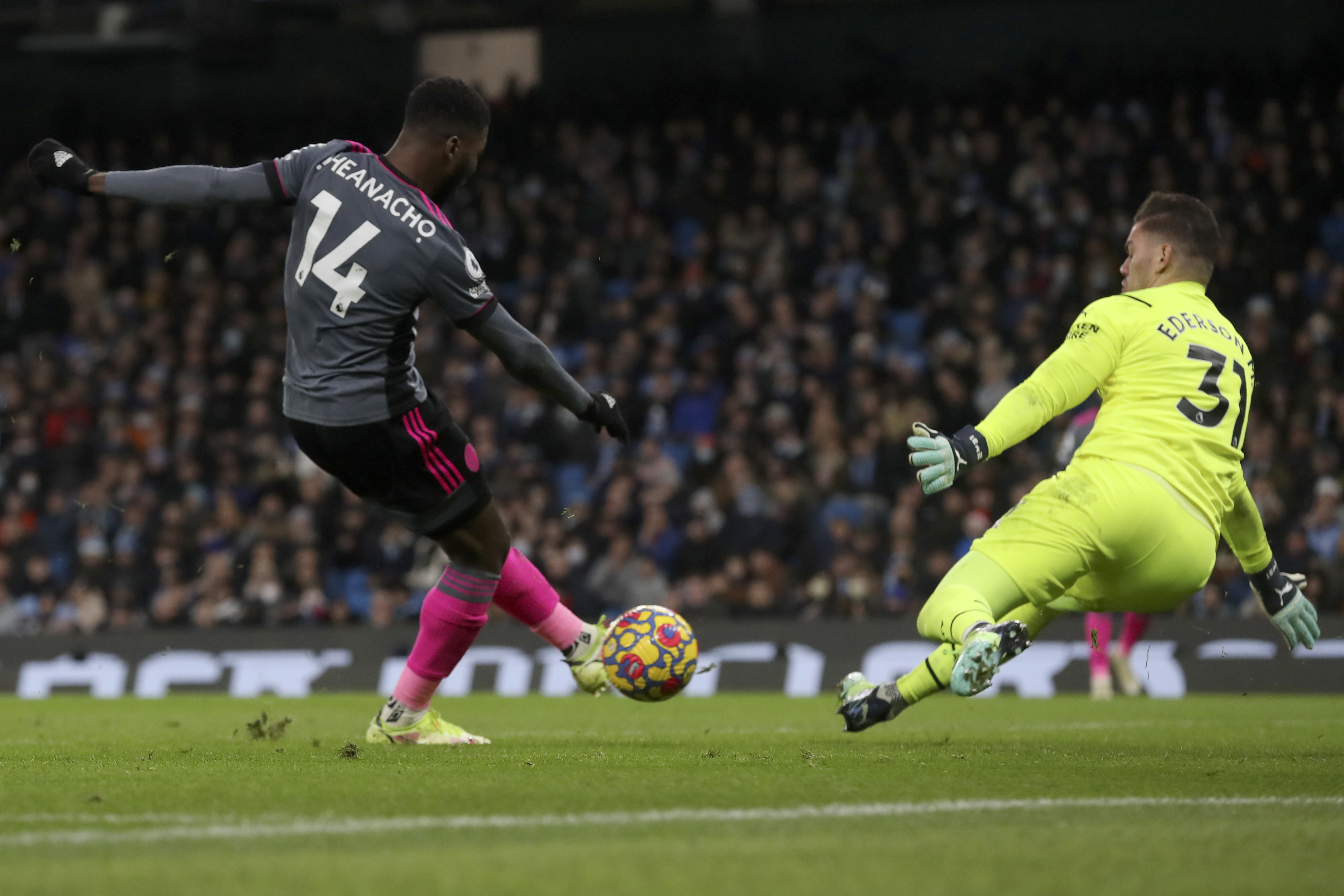 But the Foxes – inspired by James Maddison and Kelechi Iheanacho – struck three times in 10 second half minutes to leave the home fans biting their nails.

For four minutes the most astonishing comeback in Prem history looked to be on – before Aymeric Laporte and Raheem Sterling settled it late on.

What a game though – and to think some people say City are boring.

Coming to the Etihad when the champions are on song is hard enough, but doing it with five defenders sidelined is another thing entirely.

And you feared for Brendan Rodgers men – who had won just one in five before this – right from the first whistle.

It took the champions just five minutes to go ahead as Fernandinho’s ball forward was controlled by De Bruyne with his back to goal on the edge of the box.

Jan Vestergaard did not close him down quickly enough so the Belgian had time to turn before curling a low shot beyond Schmeichel into the far corner.

Youri Tielemans wrestled Laporte to the floor as a corner from the right came over and ref Chris Kavanagh got a word in his ear from the VAR.

He went to the monitor for a look and did not need too long to realise it was an obvious penalty – it would not have looked out of place in a WWE bout.

Riyad Mahrez – one of the heroes of Leicester’s 2016 title fairytale – stepped up and beat Schmeichel emphatically from the spot.

The Algerian is City’s top scorer this season with 13 – they will miss him when he goes off to the African Cup of Nations next month.

It had been a disastrous start for the depleted Foxes but they came close to halving the deficit when James Maddison curled a trademark 25 yard free-kick over the wall.

Ederson got across superbly to push the ball onto the bar and Ruben Dias got to the rebound first to clear.

If that was a rally by the visitors It was short-lived as City went down the other end and extended their lead with a brilliant move.

Bernardo Silva and De Bruyne were involved in sending Joao Cancelo free down the right and his low cross was only pushed out by Schmeichel.

Ilkay Gundogan had the simple task of slamming home the rebound and the game was effectively over with just 21 minutes gone.

Tielemans was one of just a handful of regulars starting here – but the Belgian was having a shocker here – dangling out a leg which Sterling tripped over in the box.

There was no VAR needed this time and Sterling dusted himself down to take over penalty duties. The outcome was the same though as he rifled emphatically into the top corner.

The England ace has now scored in his last four Prem matches and those problems he had getting game time at the start of the season seem a long time ago.

That meant City had scored 15 goals in their last 196 minutes of Prem football – after previously putting Leeds and Newcastle to the sword.

They were so close to improving on that record during the closing minutes of the first half.

Oleksandr Zinchenko’s ball over the top was cushioned back across goal by Bernardo and Sterling’s point blank volley was superbly tipped over by Schmeichel.

And just before the interval, the former City keeper was called into action again to keep out Gundogan’s low shot after more good work from De Bruyne and Mahrez.

The visitors had looked dangerous going forward – and it was no surprise when they pulled one back soon after the re-start.

Maddison controlled brilliantly on the half way line then pushed past Dias before swapping passes with Kelechi Iheanacho and rolling past Ederson.

Five minutes later they got another one – with ex-City man Kelechi rolling a pass into the path of Ademola Lookman who finished clinically.

City were spurred into action and Fernandinho’s header was scooped onto his own crossbar by Daniel Amartey.

But without midfield linchpin Rodri, Ciy looked vulnerable on the break.

And incredibly the impossible looked to be on in the 65th minute as Maddison again tested Ederson with a long range effort which the Brazilian once again tipped onto the bar.

The keeper had no time to react as it dropped nicely for Kelechi to turn home – and one of the great comebacks of Prem history looked to be unfolding.

Not for long though. Just four minutes later a Mahrez corner was steered home by the head of Laporte – as the visitors' defensive frailty was once again exposed.

And near the end a Mahrez corner was nodded down by Dias and Sterling swept home his second of the afternoon from close range. 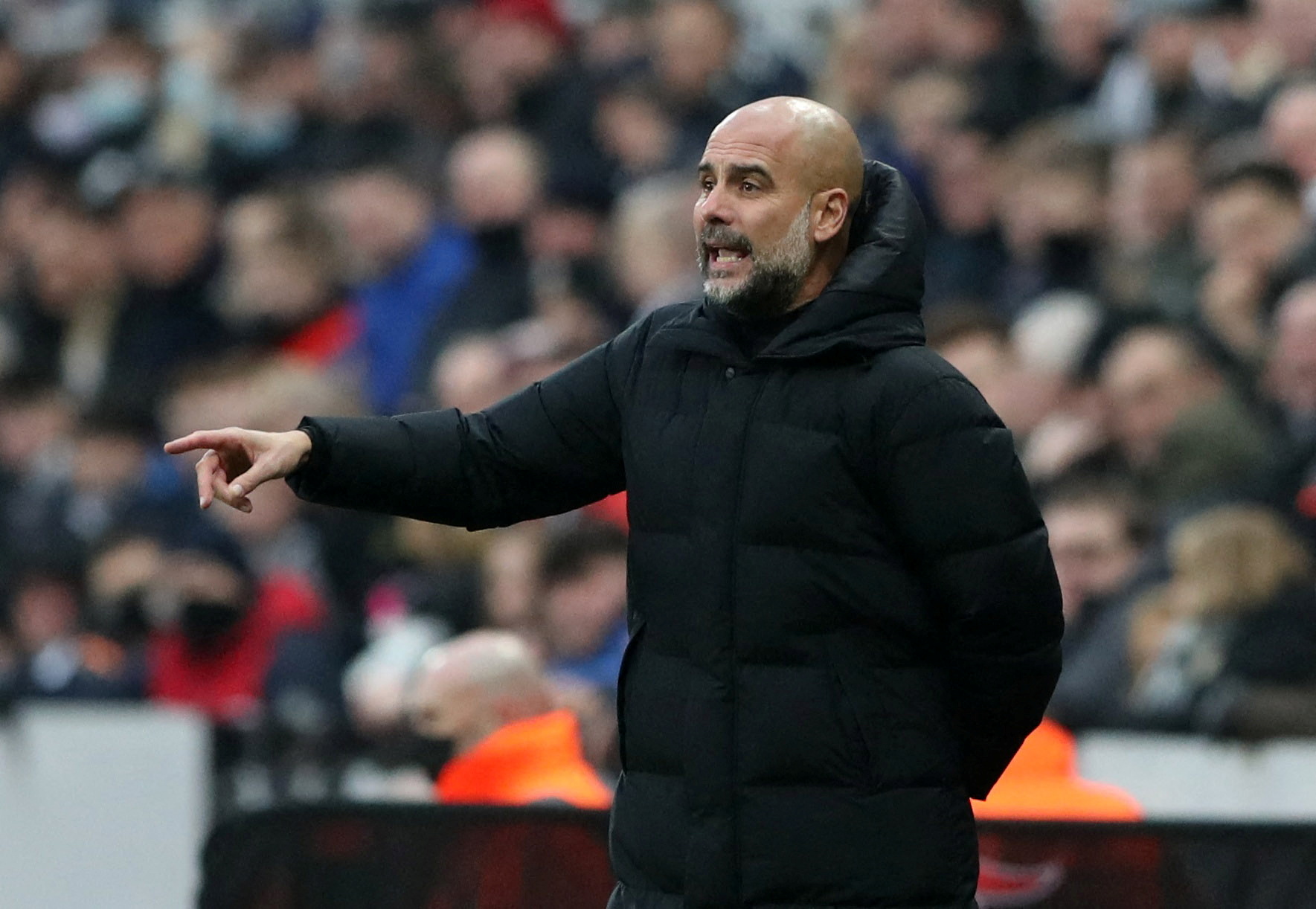 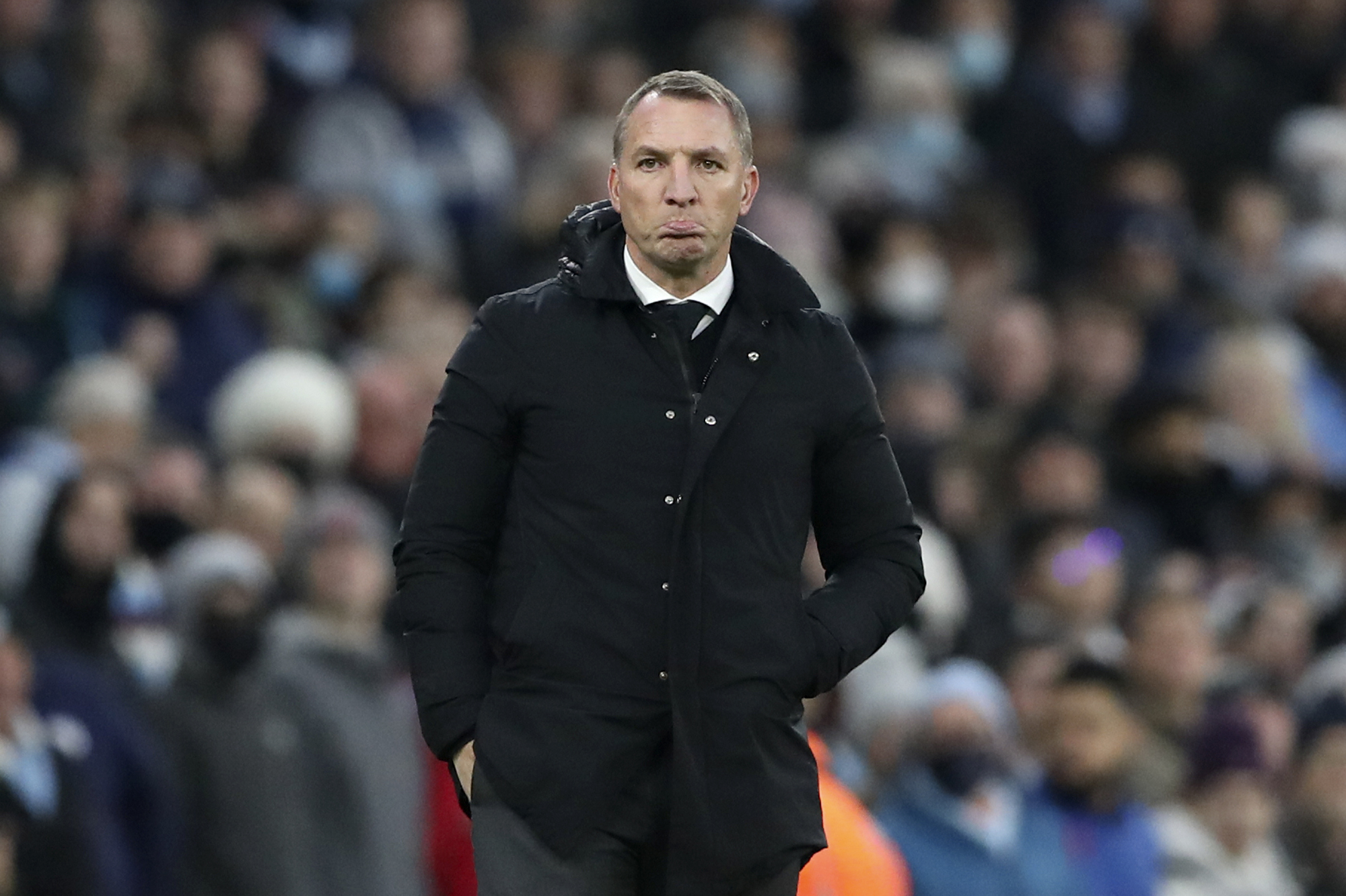