Home » Sport » Justin Gaethje told Khabib Nurmagomedov: ‘I’m so sorry for your loss. You just made your father really proud.’ 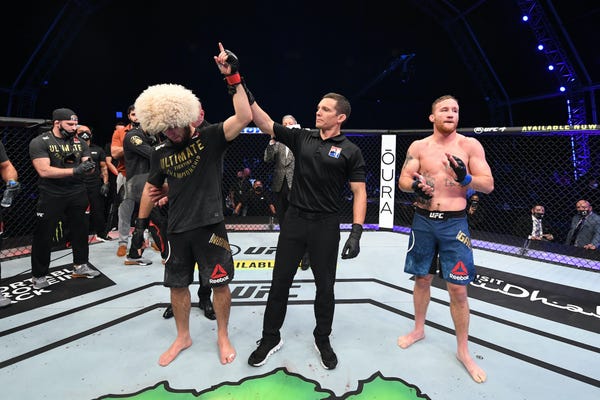 FIGHT ISLAND — Justin Gaethje told Khabib Nurmagomedov that he's sorry for his loss and that his victory at UFC 254 on Saturday would have made his "father really proud."

Nurmagomedov retained his UFC lightweight championship at the Flash Forum in Abu Dhabi when he submitted the American striking maestro with a triangle choke in the second round.

As he was regaining consciousness, Nurmagomedov was crying while on all fours in the middle of the Octagon.

So Gaethje went over to him and put his arm around him — an act which was caught on camera and perfectly encapsulates the beauty of mixed martial arts.

Likely mourning the death of Abdulmanap Nurmagomedov, his father and trainer who passed away in July after coronavirus complications, Gaethje apparently told him in that moment that what he's achieved would have made his dad proud.

"I said, 'I haven't had a chance to tell you I'm so sorry for your loss. You just made your father really proud'," Gaethje told BT Sport.

He added to ESPN that there are few who will be able to comfort him after defeat in the Fight Island finale, but appeared to take solace in the face he was choked out rather than knocked out.

"I'm not scared to get choked out," he said. "Getting knocked out does suck because there is consequences, health-wise, to that.

"Getting choked out, you get a nice little dream, and then it's onto the next one. I'm hurt, it's emotional, but ultimately it's the name of the game."

On the fight itself, Gaethje said hethought he did a good job in keeping and controlling the distance between himself and Nurmagomedov, but recognized that he needs to now improve in his grappling.

He said Nurmagomedov will be limping because of his striking in the first round.

"I had him in trouble and wasn't many kicks away from him not being able to walk," Gaethje said. "He'll be limping at least for the next three weeks. It's nothing to be proud of because I lost, but … I felt alive."

"With him retired, I'm No.1 … Poirier and McGregor are going to fight, they haven't made it official so if [he] wants to bounce out and get the belt then I'm right here. If they want to give it to someone else, so be it."