Fox News Flash top headlines for May 28 are here. Check out what’s clicking on Foxnews.com

Julianna Zobrist, the wife of Chicago Cubs star Ben Zobrist, broke her silence on social media Saturday, nearly two weeks after she filed for divorce from the 2016 World Series MVP.

Zobrist, a Christian pop singer, posted on Instagram a photo of herself and her three children, with a lengthy message in the caption.

“I am still here. Somewhat in the mire, but I am still here,” Zobrist wrote. “Over these last two weeks I have watched so many of you quietly enter the marshland with me. I can see you, sitting beside me, waist deep in the water and bog. I can feel you, in a silence like art, honoring the most intimate spaces of our pain and heartbreak without shame. I can hear you saying, Let me carry some of that for you.”

She thanked those who have shown her support during her trying time.

“Thank you for stepping forward and not back. Thank you for not shutting your eyes. Thank you for holding my heart within yours, even while you do not yet understand exactly what you are holding. Someday I will share my story with you…but not today. Today we breathe in deeply the fragrance of the rushes and reeds, and then, I might need your delicate reminder to breathe out again. Maybe tomorrow we will look up and notice the marsh wren and smile at her song. Maybe the day after that we will laugh at the skittish harvest mouse. But not today.”

She didn’t directly address her divorce from the Cubs infielder. 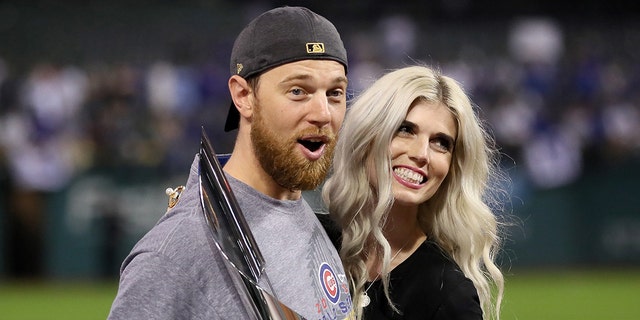 2016 World Series MVP Ben Zobrist #18 of the Chicago Cubs celebrates with his wife Julianna Zobrist after defeating the Cleveland Indians 8-7 in Game Seven of the 2016 World Series at Progressive Field on Nov. 2, 2016 in Cleveland, Ohio.  (Photo by Ezra Shaw/Getty Images)

Julianna Zobrist has sung the national anthem at several Cubs games in the past and performed “God Bless America” before a 2016 World Series game at Wrigley Field.

Ben Zobrist, who has recently taken a leave of absence from the Cubs, has played 14 years in the big leagues, including more than three with Chicago. He’s also played with the Tampa Bay Rays, Oakland Athletics and Kansas City Royals.