Judge hit a grand slam among a pair of homers to earn an early exit, Gerrit Cole struck out 12 and the Yankees routed the Detroit Tigers, 10-0.

The frequently injured Judge was held out of the Yankees’ starting lineup in the previous two games with what the team has described vaguely as “lower body soreness.” Manager Aaron Boone has declined to elaborate, although he’s eager to get Judge off his feet when he can — akin to the load management practice that’s become common in the N.B.A.

Judge admitted he and Boone have butted heads over his playing time — “I obviously want to be in there,” he said — but he acknowledged that it was a good idea to squash his lower body issue with rest before it became something bigger.

“I think the results speak for itself,” he said.

Whatever his ailment, Judge found his footing against the last-place Tigers with a leadoff homer in the third and a slam to the second deck in right field in the fourth. He was replaced on defense with the Yankees up by 10-0 in the sixth.

Clint Frazier, Aaron Hicks and Rougned Odor also homered on a cool and windy night, and Giancarlo Stanton had rips of 115 and 114 miles per hour among his three hits in a breakout slugfest for the slow-starting Yankees. The Yankees set highs for runs, hits (15) and homers (five), opening a season-high nine-game homestand with their third win in four games and improving to 12-14.

Stanton had three hits for the third straight game for the first time in his career. He’s been in a groove since moving up to the No. 2 spot in the order, with Judge now behind him.

“Those guys, obviously they’re special players, special talents in the box,” Boone said. “Feel like if we can get a full season out of both of those guys, they can do really special things in the middle of our lineup.”

Yankees pitchers had 18 strikeouts to tie a franchise record for a nine-inning game, last achieved against Toronto on Sept. 29, 2017.

Things Get Testy Between Mets and Phillies 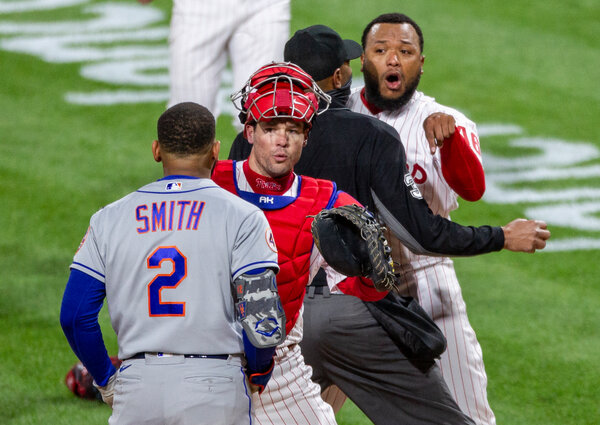 The Mets and Phillies turned the eighth inning into a bench-emptying, trash-talking, finger-pointing commotion that spiced up a routine game — and could ignite more sparks this weekend — in the Phillies’ 2-1 win on Friday night.

The benches cleared in the eighth inning when Phillies reliever Jose Alvarado jawed at Dominic Smith after he struck him out to end a rally. Alvarado — who riled up the Mets with gestures earlier this month — mixed it up with the Mets but nothing came of the heated words. Mets reliever Miguel Castro then chased Rhys Hoskins down the line in the bottom of the inning and the benches again emptied.

The fireworks fizzled faster than a Mets’ rally: The team has scored an M.L.B.-low 58 runs, including two or fewer in nine of 20 games this season.

Sam Coonrod worked a scoreless ninth for his first save.

Chase Anderson swung and missed at a passed ball on a third strike that let two runs score, and he tossed five solid innings to lead the Phillies.

Odubel Herrera received a smattering of boos in his first game in Philadelphia since his arrest on domestic violence charges two years ago. The former All-Star center fielder was recalled this week against St. Louis and played in his first major league game since May 26, 2019.

Herrera, who had last played on May 26, 2019, was suspended for the remainder of that season under Major League Baseball’s domestic violence policy. The charges against Herrera were dismissed, and he was assigned outright to Triple-A Lehigh Valley on Jan. 16 last year and wasn’t part of the 60-player pool for the shortened season.

He hit eighth and was booed — not heavily among a crowd much lighter than the 10,914 fans announced on a chilly, blustery night — and walked to load the bases. Anderson swung on a pitch from Marcus Stroman (3-2) that darted away from catcher James McCann and sent two runners home. The Phillies had a second straight game decided by bad pitch: David Hale’s game-ending wild pitch in the 10th inning cost them Thursday in a 4-3 loss against the Cardinals

Stroman left with a tight hamstring after he struck out eight in five innings. In a sign of the times, Stroman’s injury was announced by new Mets owner Steven Cohen on Twitter.