Home » Sport » Jim Fassel, Who Coached the Giants to the Super Bowl, Dies at 71

Jim Fassel, who was a longtime architect of offensive schemes in the pros and collegiate football and reached the pinnacle of his career when he coached the Giants team that reached the 2001 Super Bowl, died on Monday in Las Vegas. He was 71.

The Giants reported the death on their website. Fassel’s son John, the special teams coordinator for the Dallas Cowboys, told The Los Angeles Times that the cause was a heart attack.

Fassel, who lived in the Las Vegas area for many years, told sportswriters in late November 2000 that he was “shoving my chips to the center of the table” in guaranteeing that his Giants team, 7-4 after a loss to the Detroit Lions, would reach the playoffs.

The Giants won their last five games of the 2000 regular season, defeated the Philadelphia Eagles in the first round of the playoffs and trounced the favored Minnesota Vikings, 41-0, in the National Football Conference championship game at Giants Stadium. Kerry Collins, one of the many quarterbacks Fassel worked with over the years, threw for five touchdowns, including two to Ike Hilliard and another to Amani Toomer, his prime wide receivers.

Fassel was carried off the field by the linemen Michael Strahan and Keith Hamilton, mainstays of the Giants’ defense, along with the linebacker Jessie Armstead.

The Giants’ co-owner Wellington Mara, responding to those who might have despaired over the team’s prospects late in the regular season, said: “Today we proved that we’re the worst team to ever win the National Football Conference championship. I’m happy to say that in two weeks we’re going to try to become the worst team to ever to win the Super Bowl.” 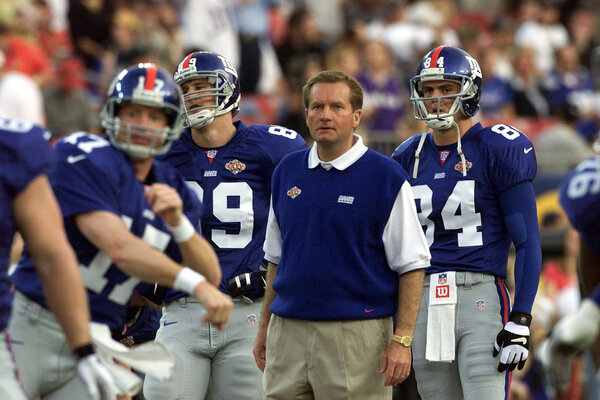 But the Giants’ luck — chips or no chips on the table — ran out in January, when they were routed by the Baltimore Ravens, 34-7, in Super Bowl XXXV, the Giants’ first league championship matchup since they defeated the Buffalo Bills in the 1991 Super Bowl.

Fassel was an assistant coach with the Giants in 1991 and 1992 and an offensive aide with the Denver Broncos, Oakland Raiders and Arizona Cardinals later in the 1990s before he was named in 1997 to succeed Dan Reeves, the Giants’ head coach for the four previous years.

He was named the N.F.L.’s coach of the year that season, when the Giants finished at 10-5-1. In December 1998, they upset the Denver Broncos, who came into the game at 13-0 behind the future Hall of Fame quarterback John Elway.

Fassel announced in mid-December 2003 that he would resign at the end of the season, after a pair of losing campaigns that included a crushing loss to the San Francisco 49ers in the 2002 playoffs after the Giants held a 24-3 lead in the third quarter.

The Giants went 58-53-1 in Fassel’s seven seasons as head coach and made the playoffs three times.

He was a color commentator for Westwood One’s radio coverage of N.F.L. games in 2007 and 2008 and was later head coach of the Las Vegas Locomotives of the United Football League.

Fassel was interviewed by at least three N.F.L. teams for a head-coaching post after leaving the Giants, but he was passed over each time. He was an offensive coordinator for the Ravens in 2005 and 2006.

James Edward Fassel was born on Aug. 31, 1949, in Anaheim, Calif. He was a quarterback at Anaheim High School, played for Fullerton College and was then the backup quarterback for Southern California’s undefeated Rose Bowl championship team of 1969. He later played for Long Beach State.

He played for the Toronto Argonauts of the Canadian Football League in 1973, then coached in the World Football League before returning to college football as an offensive coach for Utah; Weber State, also in Utah; and Stanford. He was head coach at Utah from 1985 to 1989.

In addition to his son John, Fassel’s survivors include his wife, Kitty, four other children and 16 grandchildren.

“Most people will remember his ‘guarantee’ from 2000, which was genius because if he was wrong he’d have been fired and it’d have been forgotten,” the former Giants running back Tiki Barber, who played for Fassel, wrote on Twitter after Fassel’s death. “When he was right, it became legendary.”